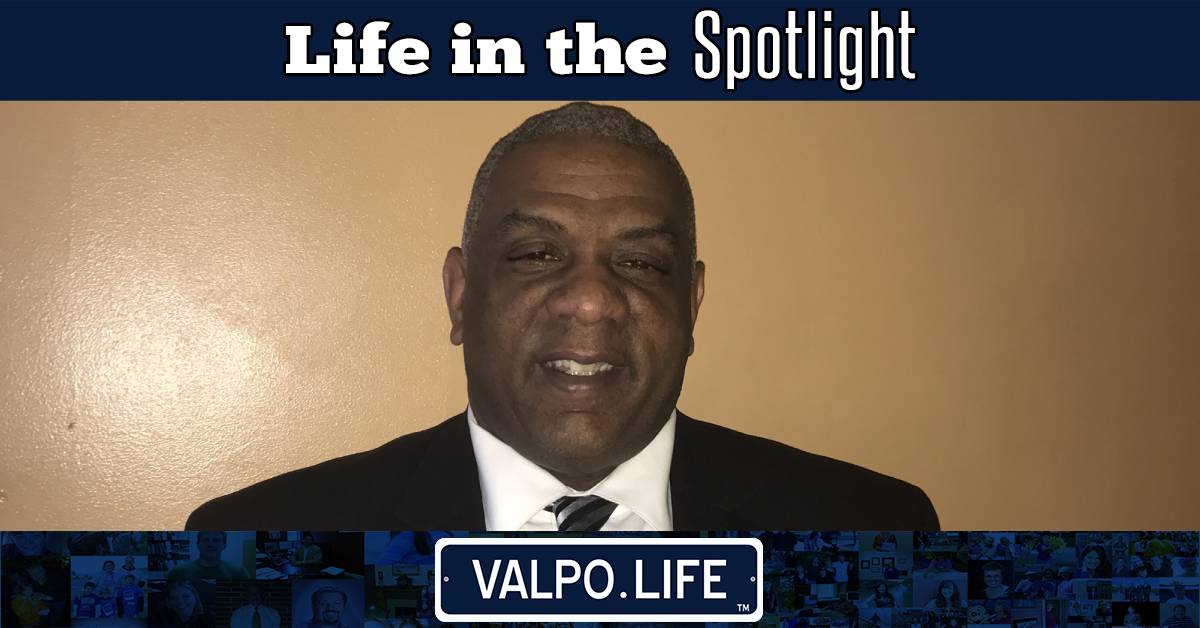 For athletes of all levels, sport plays an integral role in shaping them into better players and better people, and lessons learned through hours spent in and out of uniform are invaluable. Stacy Adams of Valparaiso recognized the value of sport from an early age, eventually turning his passion for athletics into a lifelong career. He has left a legacy of inspiration and leadership at every institution he’s served.

Adams’ influence on local athletics began in 2005 with coaching football at Valparaiso University.

He continued his coaching career at East Chicago Central High School, where he also served as Dean of Students, making the jump from coach to administrator that would ultimately lead him to his goal of supporting athletes of all sports.

In his first few months as Valparaiso High School’s Athletic Director, Adams has already seen many memorable moments. An experience he holds dear was the 2019 Patriot Night, where local veterans were honored at halftime under the Friday night lights.

“It was so great to see all the veterans come out and be acknowledged. I have family members who are veterans, so this meant a lot to me personally. But more than that I think any time we can dedicate to supporting our veterans is key for a healthy community.”

Another high point in Adams’ first year at Valpo High was the all-too-memorable 2019 IHSAA Class 5A Football State Championship, the team’s first trip to the state finals in 18 years.

“It was a very exciting time, not just for the team but for the school as a whole, for myself, and for the community at large,” Adams said. “It had been a while since football made it that far, and we had a great showing at the State game. We sold over 1,500 presale tickets and had over 2,500 in attendance on game day. I was very proud of our representation on and off the field.”

Whether he’s attending a game, watching a practice, or running the Athletic Department, Adams is spreading positive vibes across Valpo’s campus.

“It’s a great day if you make it that way,” Adams said. “That’s what I say to everybody who says ‘hey’ to me when I’m walking through the building.”

Adams first took a liking to the upbeat phrase in his coaching days at VU.

“I remember one of the other coaches sharing it with the athletes, and it stuck with me ever since.”

In his many years in sports and athletic administration, Adams has no doubt taken this mantra to heart, sharing his knowledge and passion wherever he goes. Though his time at Valpo is just beginning, this opportunity to continue doing what he loves is one he never takes for granted.

“To be an A.D. in my own town is such a blessing because I know a lot of the people in the community,” Adams said. “They’ve always welcomed me, and that’s something I cherish.”

Adams’ growing impact on the world of local athletics will not go unnoticed, as he will be recognized as IBCA Athletic Administrator of the Year this coming April.

“It’s not as easy as it may seem to be an Athletic Director,” Adams said. “It’s more than just going to games and supervising students. There’s a lot of paperwork, attention to detail, and encountering a lot of different personalities with coaches, athletes, and parents. You have to really be a people person, and I’ve been privileged enough to have been able to handle this job well over the years.”