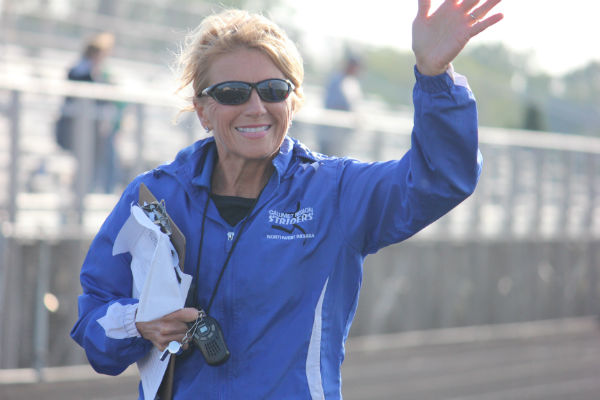 Giving back, being a role model and teaching kids how to have fun by getting involved with running is why Sue Brown-Nickerson is a Valpo Life in the Spotlight.

Brown-Nickerson has been running as far back as she can remember. She ran track in high school for Chesterton Coach Steve Kearney and now they have been reconnected coaching for CRS.

Working full-time as a professional in her field, Brown-Nickerson still finds time to volunteer for CRS. From 2000-2005 she was President of CRS and in 2005 Brown-Nickerson saw a need for a Youth Running Program in our area. After volunteering for AAU meets and witnessing kids coming from as far away as Fort Wayne, Bloomington, Anderson and South Bend, IN and not seeing participants locally, she did something about it. She formed the Junior Striders Youth Running Program where she has served as the Director and Head Coach.

The Youth Running Program started with just 8 kids in 2005 and has grown to almost 200 today. Developing age divisions for the young athletes has meant that there is something for everyone to participate in.

Brown-Nickerson said, “Most races have five year age divisions but I couldn’t see an eight-year-old running against a 14-year-old so the divisions were put in place. Now I have seen other events held offering the same age divisions.”

She added, “There has been an explosion in running. Families are running together. They can come out to a meet and there is something for everyone and now we even see little tikes running because they might see their brother or sister competing and they want to do it too.”

Brown-Nickerson said that one of the reasons that the program has become so successful is because, “As coaches we provide a lot of options but most of all we want the kids to have fun. The kids can participate in what they want; they pick and choose their events and do what they want to. We are here to help them progress but we also have fun and play games like ‘Tag-Team Relay’. We also try to stay positive and parents love the program because of the flexibility it offers.”

A healthy lifestyle is one benefit of running.

Brown-Nickerson said, “We have two types of kids that come out for Striders, those that want to run recreationally to promote a healthy lifestyle and those that want to compete. We sometimes get a reputation for being competitive, and naturally, some of the kids become more competitive and they usually become our veterans, but we want people to know that we don’t promote a competitive program, we promote a Youth Running Program with something for everyone.”

Recently Brown-Nickerson was nominated by the Valparaiso Kiwanis Club for Volunteer of the Year. Though she is not a Kiwanis member, she was honored to be considered for the recognition.

She said, “It opened my eyes up to the volunteerism in Valpo. I felt great to have been among all the other nominees. I also felt honored because running has been good to me and that’s why it is easy to give back this way. Our role as coaches is to be a role model and become influential and to see that these kids have a great experience. I have seen kids in the grocery store and they say, ‘Mom, it’s Coach Sue,’ You become an important element in their development. To see them have a great experience, see them smile or get a personal best is why I keep coming back.”

Brown-Nickerson also has directed the Taltree Ten for the last 10 years with proceeds benefiting the Youth Running Program. This past year with the proceeds raised, $2,500 was given out in college scholarships benefiting five local seniors.

Sue Brown-Nickerson gives of herself tirelessly by giving back to the community through her love of running. She truly is a Valpo Life in the Spotlight.