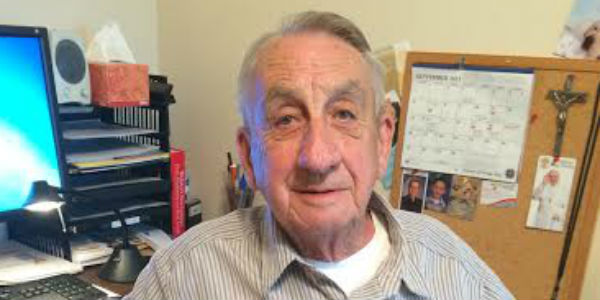 As busy as life truly is, often times it is hard to be able to donate your time volunteering for the betterment of the community you live in. Valparaiso resident, Walter Martin has challenged himself to not only volunteer days out of his week to help his community but has been doing so for 19 years now.

Walter has been a resident of Porter County for 85 years strong. He spent his school years here and as he explains it, “I went to everything here.” After he graduated and spent some time at college, Walter spent two years in the Army and then returned to college and came back to his hometown for work.

One of the organizations that Walter has especially given his time to is the hospital in Porter County. From the old hospital, the surgery center and the newer Porter Regional Hospital, that environment has been constant in his life.

Walter got involved with the hospital after a friend asked him about joining the ministry there. That turned into him helping at the outpatient center, coordinating the volunteers and directing patients coming in.

“I was out there for 10 or 12 years. I would help people get registered. When I first got there, I told everyone to just leave me alone for a little bit and let me figure out the flow of the place and we can get this all arranged. I set a desk out and worked out a way so that when people came in, I could help them sign in and get taken care of,” Martin said.

After things were organized to a T, Walter decided it was time to put his volunteering skills to a new place.

“It was too much sitting, and not enough doing.” He then turned his focus to the ER, where he helped out maintaining the rooms and really getting to interact with some of the patients.

It has now been 14 years and at 85 years young, Walter still goes there twice a week and does what he can to help people out. He has experienced first hand what simply having a friend during a stay in the hospital can do for a patient.

“I’ve got thousands of memories. A few months ago, during one of my shifts, I met a woman. I would see her staring out the window just wishing she could get out of there. I went to see her and she really looked bad. We chatted for a bit and then she asked me if I could give her a hug. I said I’d love to, but we are restricted from doing so but why don’t we hold hands and say a couple prayers together. I’ve had situations like that happen a lot and on my way home, I’ll say the rosary for them,” Martin said.

Besides being involved with the hospital, he also volunteers at his church, St. Paul’s Catholic Church, and serves as a Eucharist minister there.

“The most enjoyable part is the people; the people that work there and the patients. I just kind of think God sends me up there and something great always happens. I love to talk to people and it just comes so natural,” Walter said.

Sometimes a hospital stay in inevitable, but if that ever happens, you can be sure to find company in Porter’s most devoted volunteer, Walter.

“If you ever happen to be there, ask for Walter and I’ll come see you,” Walter Martin told me as I left. Volunteering has been a part of Walter’s life for a long time now, and he plans to continue as much as he can.