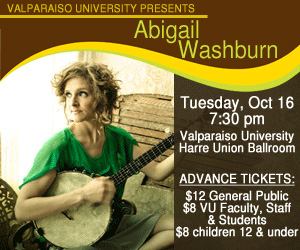 Abigail Washburn, a singing, songwriting, Illinois-born, Nashville-based American clawhammer banjo player, will be playing at a concert at Valparaiso University on Tuesday, October 16, 7:30 pm, as part of the Great Lakes Music Festival. Washburn has deep connections with the Chinese culture; she expands horizons and makes the distance between people, culture and musical style seem not so very far.

American banjo player Abigail Washburn pairs American folk elements with the sounds of China, creating music unlike anything anybody's ever heard before. Abigail has been featured on PBS, NPR, and is a TED Fellow.

Washburn is a singing, songwriting, Illinois-born, Nashville-based American clawhammer banjo player. Through her deep connections with the Chinese culture, she expands horizons and makes the distances between people, cultures and musical styles seem not so very far.

Washburn first began playing the banjo "in response to having fallen so deeply in love with Chinese culture," says Washburn. "I think subconsciously I was seeking something special about America that I could take back with me to China and share with my Chinese friends." That's about the time she started translating English songs into Chinese and adapting Chinese tunes to the banjo. Recently, Washburn was featured on a PBS special highlighting the emergence of the banjo as an instrument of importance to US culture.

She made a name for herself singing in Chinese on her debut album Song of the Traveling Daughter (2005), and with her collaborative music project known as Abigail Washburn and the Sparrow Quartet, a group that includes now-husband and banjo virtuoso Bela Fleck, cellist Ben Sollee and fiddler Casey Driessen.

At the request of the U.S. government, the Sparrow Quartet toured Tibet in 2006-something no other American band had done-and performed in Beijing during the 2008 Olympics.

She’s no less sought out stateside; she played the Clearwater Concert—a multi-generational folk extravaganza celebrating Pete Seeger’s 90th birthday—sang Stephen Foster songs backed by the Nashville Symphony during the 2009 Americana Music Festival and has become a favorite opening act for Steve Martin and the Steep Canyon Rangers. Plus, she and Fleck still do shows as a duo; a meeting of the minds and banjos.

After an earthquake devastated the western province of Sichuan in 2008, she teamed up with Shanghai-based producer David Liang in 2009 to raise money and awareness for the victims. A benefit album, Afterquake, turned the voices of people affected by the disaster into music.

Washburn will serve as artist-in-residence on Valpo's campus from Oct. 15-17. During that time, she will rehearse with a variety of guest and university musicians who will collaborate with her for a portion of her Oct. 16 performance. Washburn will collaborate with Chinese musicians from the Beijing Central Conservatory of Music, the Shanghai Conservatory of Music, and Xishan High School of Renmin University, as well as Valparaiso University's own Traditional Chinese Music Ensemble.