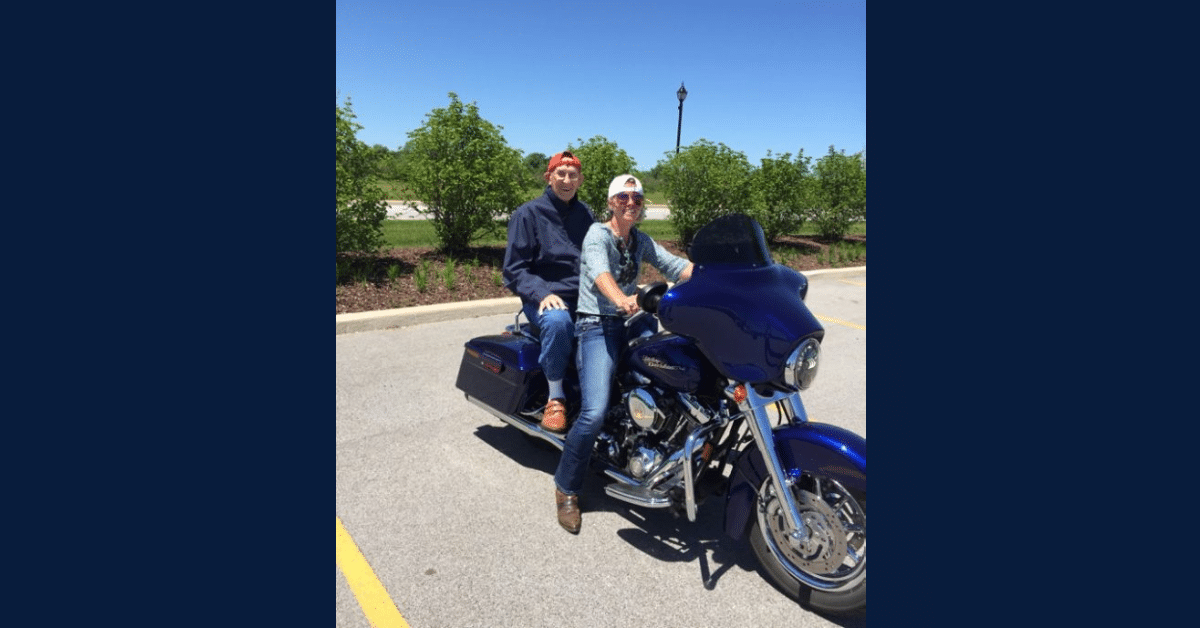 “Kenneth is my dad’s name,” Pete shared with me when I met him. Though his name is also Kenneth, he said it’s too formal for him. Pete suits him well. At 87 years old, his appetite for adventure and jokes is just as plentiful as ever, which is what led this Center for Hospice Care (CHC) patient to take a ride on a Harley just a few months ago.

“I had a motor scooter when I was a kid,” Pete said. It was the scooter that ignited his desire for a motorcycle. Eventually, when he was grown and had the money for it, he got his wish. “The first motorcycle I had was a full-size old Harley. When I got it, it ran on only one cylinder. I got it fixed and repainted it. It was a stick shift.” The adventures began.

He has taken long-distance rides on a motorcycle, but also in a 1929 Model A Ford Roadster. “I put 135,000 miles on that car,” Pete said. “We went as far as Key West in Florida, clear up the east coast, into upper Michigan, Canada, all over Colorado and down to Mexico.” Though it may not be the fastest, most convenient, or even most comfortable ride, there is an adventurer’s heart at the core. “It’s very special,” Pete said. “It’s an experience.” Long-distance rides in a Model A attract attention, and in some ways, brings people together. “We didn’t drive the Interstates,” Pete explained. “We hit the backroads. We hit all the little towns. The local people would see us and come out. Shoot the breeze with us.” One of his favorite rides was to Leadville, Colorado, the highest city in the United States at 10,200 feet. With an oxygen making machine in the rumble seat to help with altitude sickness, they were warmly welcomed at this little city. “They cleared Main Street and made arrangements for us to park along it. There were a ton of people that came to see old cars that high in the mountains.”

For the past 27 years, his wife Jeanne has been his partner in his adventures. Their unorthodox wedding announcement was perfectly suited for them. At the time, they had a stone house by the river, inclusive of an antique shop. Picture a hog roast with 350 people in attendance along with an array of old cars strewn out along their front lawn. After their joyous announcement, Pete had another surprise for his bride. “A scruffy looking guy with a big, long beard taps me on the shoulder and says, ‘You need to come with me,’” Jeanne remembered. Though hesitant, she followed him. “He surprised me with a hot air balloon! We went straight up over our house and you could see all the people watching us…it was awesome.” Pete has kept it interesting. Only three weeks after knee surgery, Pete needed to get to the hardware store. Jeanne was working. He didn’t want to walk. He got out his little dirt bike, put on a jacket and decided to make his way to the store. “I forgot to put the kickstand up,” Pete recalled, while I cringed. “I leaned over a little to put the kickstand up. I jammed my toe and shoved my leg backward. I went off the driveway and just missed a tree.” Though he wasn’t going very fast, he had a fleeting thought that this wasn’t a good idea. But it was fleeting. He fired the bike back up and finished his trip, much to the surprise of the guys at the hardware store, who knew of his recent surgery. Jeanne shook her head in dismay as Pete recalled the memory, however she smiled. “I’ve had a fun life,” Pete said, his eyes gleaming mischievously. Kidney failure and other issues have slowed him down a bit. He started hospice with CHC and the care has proven beneficial for him and his wife. “With hospice care, we don’t have to haul him around to all of these appointments and put him in the hospital,” Jeanne shared. “It has just been wonderful. We are very happy and pleased.” Health may have slowed Pete down a bit, but it can’t keep him down. Michiana VIP MD is a concierge medicine practice of CHC board member Dr. Jesse Hsieh. At a recent office visit at Michiana VIP MD, Pete was talking to Jami McDonald, Director. “Pete came into an office visit one day and we were talking about my bike,” Jami said.

“This may have been when he realized that I rode a bike. As bikers, we naturally share stories of riding. Pete shared his story with me about how he used to ride and how much he loved it. I proceeded to do all the normal stuff that I do for an office visit and right before I left the exam room to get the doctor Pete asked me, ‘Will you give me a ride on your bike some time, it's on my list?’ I said, ‘Absolutely, I will.’ From there we planned it for his next visit.” Some may be questioning at this point if taking a risky motorcycle ride may be the best idea. BJ Miller is a palliative care specialist at Zen Hospice in San Francisco. He did a TED Talk about “What Matters Most at the End of Life.” He shared a story about another adventurer, like Pete. Here’s what he said, “Loss is one thing, but regret, quite another. Frank has always been an adventurer—he looks like something out of a Norman Rockwell painting— and no fan of regret. So it wasn’t surprising when he came into the clinic one day, saying he wanted to raft down the Colorado River. Was this a good idea? With all the risks to his safety and his health, some would say no. Many did, but he went for it, while he still could. It was a glorious, marvelous trip: freezing water, blistering dry heat, scorpions, snakes, wildlife howling off the flaming walls of the Grand Canyon—all the glorious side of the world beyond our control. Frank’s decision, while maybe dramatic, is exactly the kind so many of us would make, if we only had the support to figure out what is best for ourselves over time.” Life is about risks. Risks in all things: love, choices, jobs, family, and sometimes…the thrill of a motorcycle ride. Indiana cooperated, providing gloriously blue skies and sunshine. Pete was able to ride so fast his hat flew off. “She did a nice job,” Pete said of Jami. “She didn’t drive 30 mph, probably 50-55 mph where she could.” And on the way back to the office, they found the hat again. The reality is, while Pete can still get on the motorcycle, we need to support him in his decision to do so. It’s Pete’s life…and Pete loves adventure!