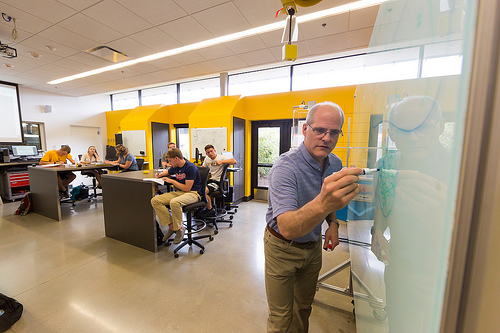 “Early in my professional career I realized I was much better prepared for the workplace than my colleagues who graduated from other institutions,” John Draheim said. “The faculty at the College of Engineering were responsible for providing the education I received, and now it is time for me to give back so that others receive the same high quality instruction. That’s why Jan and I decided to establish an endowed fund to support engineering faculty development.”

John earned a bachelor of science in electrical engineering from Valpo and a master of science in management from Pace University. His professional career in telecommunications spanned 40 years, where he managed major international projects as vice president of operations for Ameritech International in Chicago and vice president of corporate services at FLAG Telecomm in London.

Jan and John are longtime benefactors at Valpo. He has been a member of the Valparaiso University Board of Directors since 2010 and currently serves on the Campaign Executive Committee for Forever Valpo: The Campaign for Our Future. John formerly served as chair of the College of Engineering National Council, chair of the Valpo Fund and as a member of the Presidential Search Committee in 2007. He received the Valparaiso University Alumni Achievement Award in 2006.

“Jan and John Draheim have a deep commitment and passion for Valpo,” said Mark A. Heckler, Ph.D., president of Valparaiso University. “By establishing an endowed fund to support faculty development in the College of Engineering they are providing resources in perpetuity that will ensure that great teaching remains a hallmark of a Valpo education. We are grateful for everything they contribute to the University through their time, expertise and resources.”

The Draheim’s commitment supports Forever Valpo: The Campaign for Our Future, a $250 million endowment campaign focused on raising permanent support for student scholarships, faculty development and programs that prepare students for lives of leadership and service. The Campaign was officially launched on Sept. 23, 2016, and has raised more than $160 million.