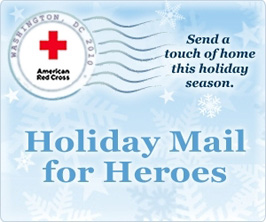 United Way of Porter County and AmeriCorps Service Sites across Lake, Porter, LaPorte, Starke, and Marshall Counties are teaming up with the American Red Cross to collect and send cards of thanks and support to members of the Armed Forces, veterans, and their families during this coming holiday season.

Many service members and veterans will once again be separated from their families during the holidays. The American Red Cross Holiday Mail for Heroes program empowers people to support our troops and “Give Something That Means Something”. Since 2006, the American Red Cross and Pitney Bowes have received and distributed more than 4.7 million holiday cards for members of the U.S. Armed Forces around the world.

United Way of Porter County is collecting unsealed cards with positive and uplifting holiday messages from October 8 through November 28 at their Valparaiso office or at any AmeriCorps Service Site in Lake, Porter, LaPorte, Starke, and Marshall Counties.

Supporters providing handmade cards are asked not to use glitter, as it can cause issues for delivery. Letters addressing terrorism, politically partisan messages, or any negatively worded messages will not be accepted. Supporters are encouraged to including the name of their organization but are asked to refrain from including addresses, photos, their last names or any items within the cards.