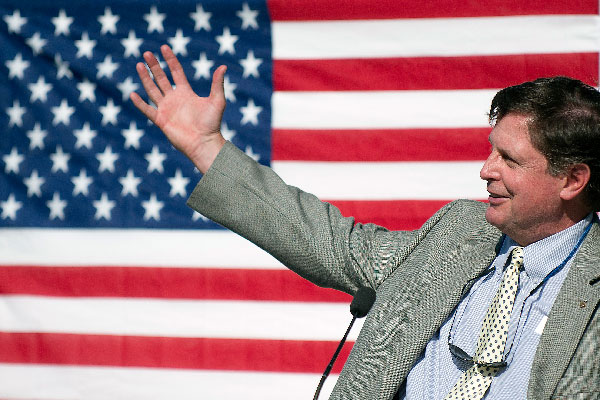 Neil A. Armstrong, the first human to step foot on the moon, was lauded as "an exemplary Boilermaker and an extraordinary American" during a memorial service Monday (Aug. 27) at Purdue University.

Joe Rust, president of Purdue Student Government, which organized the service, told a crowd of more than 1,000 people near Armstrong's statue at the Neil Armstrong Hall of Engineering that the astronaut "inspired us to go beyond the classroom, beyond our boundaries and even challenged us to go beyond Earth."

Gregory Harbaugh, an astronaut who graduated from Purdue in 1978, said Armstrong provided valuable lessons for all the astronauts who followed him.

"What I learned from Neil is to learn from what you encounter and prepare, prepare, prepare for anything because you never know what might happen," said the veteran of four NASA space flights, including the second Hubble Space Telescope servicing mission in 1997. "That's what we did on the Hubble mission. It's not that you have to be perfect every moment. We learn all along the way. Neil and all those guys set the tone, set the expectation."

Stuart Shippee, a Purdue student in the School of Aeronautics and Astronautics who also is in the Air Force ROTC, said Armstrong is the reason he came to Purdue.

"He's had a great impact on you and all of us," he said. "I came here with the goal to follow in his legendary footsteps, and I am not alone. He has inspired many people to come here.

"I had the opportunity to have dinner with him on one of his visits here. He constantly encouraged me to study hard, do my best and told me that limits are made to be pushed. His legacy to us is that any of us, with hard work and Purdue's help, can do amazing things one day."

"He was a reluctant hero, and whenever he visited Purdue, he was more interested in talking to the students about their exciting future and not his legendary past," he said.

Other speakers at the service included Leah Jamieson, Purdue's John A. Edwardson Dean of Engineering; Tom Shih, head of the School of Aeronautics and Astronautics; and John Norberg, author of "Wings of their Dreams," a book about Purdue's role in aviation history.

The Purdue "All-American" Marching Band opened the ceremony by playing the "Purdue Hymn." As a student, Armstrong played the baritone horn in the band. Phi Delta Theta, the fraternity of which Armstrong was a member at Purdue, conducted a memorial ceremony, and the Purdue Glee Club closed the service by singing the national anthem as the Purdue Air Force ROTC honor guard presented the colors.

A box for letters to Armstrong's family was available at the service site.

Tributes to Armstrong also can be made at a special Purdue website, "Neil Armstrong and Purdue," by going to http://www.purdue.edu/armstrong, clicking on the "In Tribute" link and scrolling to the bottom of the page.