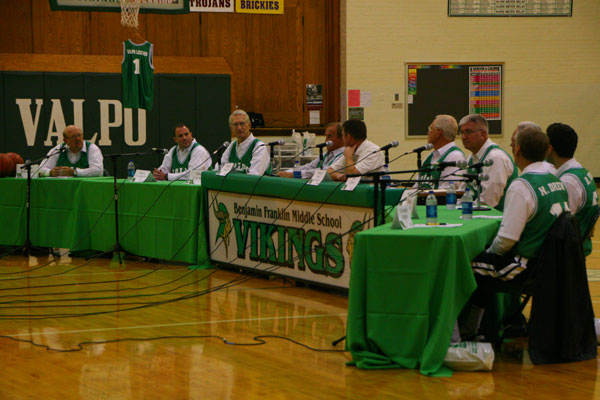 Thanks to everyone who came out to the historic Boucher Gym for the Basketball Legends Roundtable on the 25th. Seeds for the idea came from interviews with current VHS coaches Joe Otis and Jeanette Gray, and then following with Skip Collins and Bob Punter, when the pillars of Valpo basketball shared with us some funny stories and some great life lessons on and off the court.

We’d like to thank Blythe’s Sport Shop for donating jerseys to the Legends, and one that all of the Legends autographed, which we are offering for auction here. Also thanks go to Chris Fields, the Ben Franklin Middle School Principal, for hosting us and allowing us to use his facility. VHS principal Jim Doane was a huge part of putting the event together as well, as he helped coordinate the event and donated two basketballs, which were signed by all of the Legends. One ball was won by Jeff Small, who came to the event, and the other will be placed in the trophy case at Valparaiso High School.

Below is a recap of the event, with some memorable quotes from each person. You can view a photo gallery of the event by clicking here, and a highlight video will be uploaded soon. 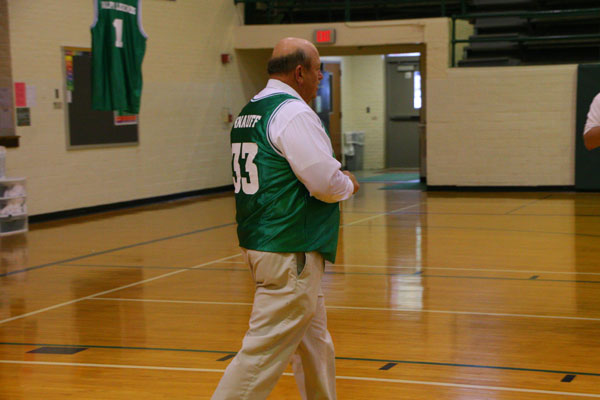 John Knauff #33
Knauff was the first Legend introduced on the roundtable, as he has coached in the VHS basketball system under Virgil Sweet, Dale Ciciora, Skip Collins and Bob Punter, compiling 34 years overall. He has written a new book, The Green and White: 100+ Years of Valpo Viking Basketball, which compiles all of the Viking basketball history, dating back to 1907 through the 2008-2009 season. The release of the book will likely be in mid-to-late November, to coincide with the Hoosier Hysteria that sweeps Valparaiso. 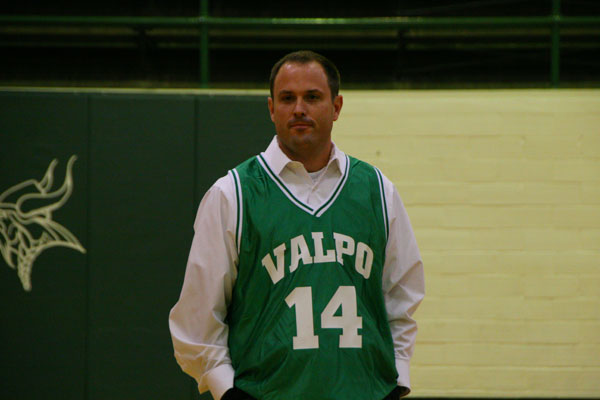 Rob Cavanaugh - #14
The next Legend is the only player at the Roundtable that had played for Skip Collins, Bob Punter, and Homer Drew. He combined with Dave Redmon to become the highest scoring duo in Valparaiso basketball history at the time of their graduation. He is the owner of the high school’s longest consecutive free throw streak, hitting 72 in a row from the line in the 1990 season. He went on to play here at Valparaiso University as well. 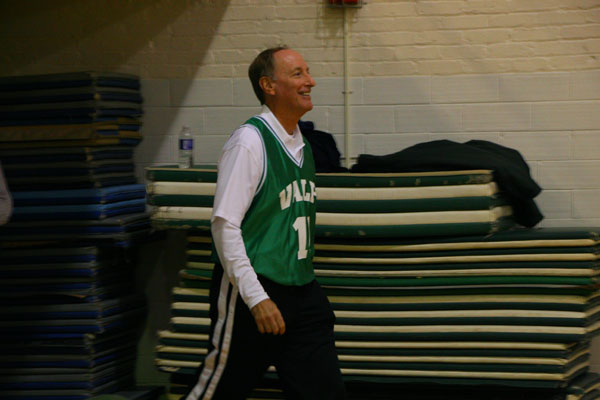 Homer Drew - #11
After moving in to the Valparaiso University head coach position in 1988, the next Legend introduced was key in putting Valparaiso basketball on the map on a national scale. In his career, he has taken VU to eight conference regular season championships, nine conference tournament championships, nine NCAA tournament appearances while winning conference coach of the year four times. Recently named to Valparaiso University’s 150 Most Influential Persons in VU history, he has crossed the 600-win plateu last season, making him just the 32nd college coach in basketball history to reach the milestone. 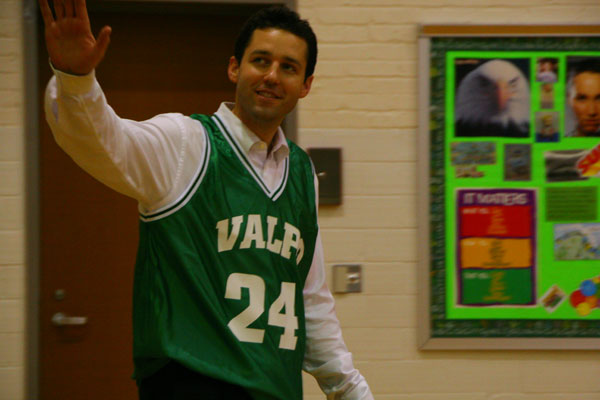 Bryce Drew - #24
Our next legend is the only VHS legend to go on to play professional basketball in the National Basketball Association. The second all time leading scorer in Viking basketball history, he holds several records for the Vikings, including most Varsity points by a Freshman and most Varsity points by a Senior. He is the only player in Valpo history with two of the top 10 highest free throw percentage seasons. He won team MVP three years in a row, and was named Mr. Basketball in 1994. 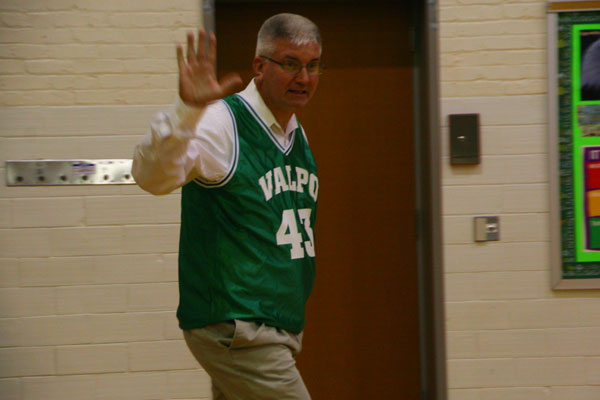 Joe Otis - #43
Our next legend has had a storied career in the Duneland Athletic Conference. He was a 1970 graduate of Valparaiso High School, playing 72 games for the Vikings over three years. Upon graduation, he had accumulated the most points in the history of the Vikings with 1,113, a 15.5 points per game average. He held the record for most field goals made in a season and a career, and was second on the all-time rebounding list. After leaving VHS and playing in the Big Ten, he went on to follow Skip Collins as the coach of LaPorte High School. During his career at LaPorte High School, he accumulated a 296-189 record, good for a .610 winning percentage. During his coaching career, he accumulated eight sectional titles, four DAC titles, three regional titles, one Final Four appearance in 1997, and has won 21 or more games in a season three times. This summer, he was named as the new VHS Mens Varsity Basketball coach. 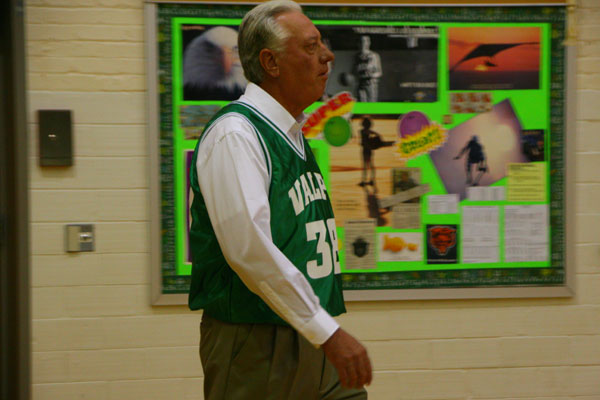 Bob Punter - #38
Our next legend coached the most victories in Valparaiso High School Basketball history. After climbing his way from coaching the C and D teams, he was appointed JV coach in 1977. Upon Collins’ retirement in 1989, he was appointed Varsity head coach and immediately continued the winning traditions. For 18 years, he manned the Vikings’ sidelines, taking the school to its only state championship game with its most successful team. Upon retirement in 2008, he had amassed 302 victories against just 117 losses. 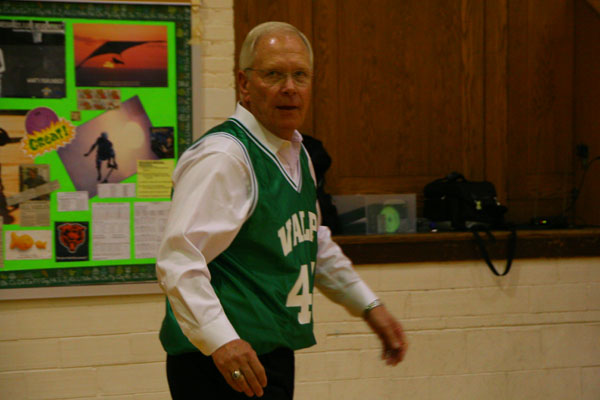 Skip Collins - #44
Our next legend was a Valparaiso High School graduate in the class of ’61. Upon graduating, this three-sport athlete held school passing records at VHS while being recognized as an all-state quarterback. On the basketball court, he set school and national records and gained all state recognition. In baseball, he was the only four year letter-winner in VHS history, all the while was Class President for two years. After successful stints as a basketball coach in Seeger, Rochester, and LaPorte, he coached Valparaiso High School to a 225-94 record, including nine Sectional victories in a row. The three-time Indiana High School Coach of the Year was inducted to the Indiana Basketball Hall of Fame in 2006. 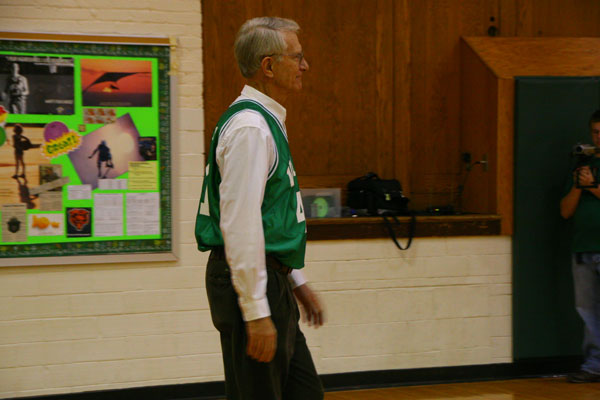 Dale Ciciora - #42
Our next Legend was described by his predecessor as “the greatest basketball mind” he had ever seen. He spent his playing career playing for nearby Liberty Township and at Valparaiso University, and beginning in 1958, he spent over 30 years in the Valparaiso basketball system, coaching both the boy’s and the girl’s teams. He is credited, along with Virgil Sweet, for developing the renown Valparaiso Free Throw Method. Although his tenure as coach of the boys’ teams was relatively short, despite his winning record, and victories in the sectional and regional tournament, his influence could be seen throughout the VHS basketball system. 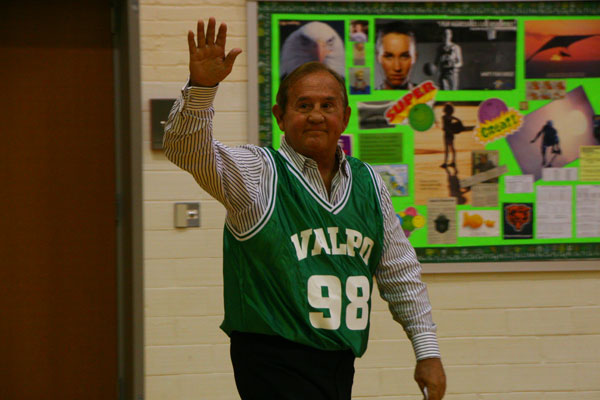