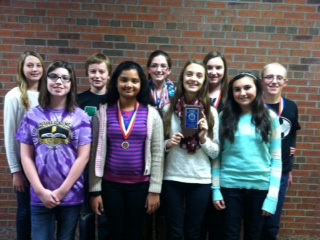 The Benjamin Franklin Spell Bowl Team won third place honors in the state competition on Saturday at Purdue University in West Lafayette. The team spelled 70 of 72 words correctly, trailing the teams tied for first place in their class by only one point. For the thirteenth straight year Benjamin Franklin was among the nine teams qualifying for the state competition in Class 1. Thirty teams throughout the state competed in four classes in the annual contest sponsored by the Indiana Association of School Principals.

Composed of three veterans of the state contest and five members who were new to Spell Bowl competition at the junior level, the team has worked hard at early morning practices to master a spelling list of over 1600 words. In rounds of nine words each, Sam Burow-Falk and Sarah King were near perfect, while Kalyn Struve, Alexis Scida, Aspen Lara, Emma Lovett, Ishika Jain and Julia Kranjac all turned in perfect performances. The Benjamin Franklin team is coached by Elizabeth Sattler, Erin Strauss, and Helen Gioia.