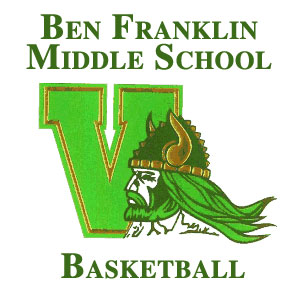 The 7th grade “A” team was involved in another heartbreaker last night, but this time they were on the other end as they fought back from a rough start and beat Crown Point Taft 27-24.

In a very low scoring affair, the Vikes struggled with the Bulldogs zone defense and couldn’t find ways of putting the ball in the basket. Drew was the only offense in the first half as he scored 8 points and pulled down 8 rebounds.  The Vikings trailed by 4 at half and the boys were determined to start the second half strong.

Alex and Cole answered the call as they outscored Crown Point 14-10 in the final two quarters.  If you are a math person, you are asking yourself, what about the 3 other points? Well, Max Jindra came up clutch with just under 45 seconds left and sank in a perfect shot from down town. The Vikes played aggressive defense and didn’t allow their opponents to take a shot and came away with a great win! Scorers for the boys were: Drew and Alex with 8, Cole with 6, and Max with 5.

Coach also wants to acknowledge Kyle, Jake, Colin, Mike, and Dan for their efforts during this difficult contest. Coach is proud that you never gave up and were determined to go home winners.  The boys will play round two on Wednesday as they will go up against Portage Fegely.  Let’s get them boys!