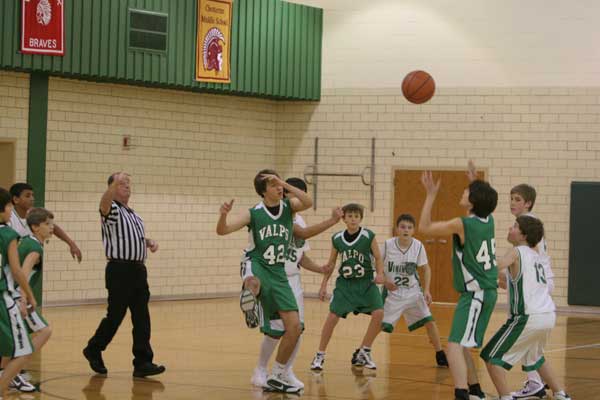 The 7th grade “A” team lost a close battle last night against Merrillville Pierce 44-38. The Vikes put forth a solid effort and had a chance to pull ahead with less than 2 minutes left, but some costly turnovers sank any chances of a comeback BF had.

Alex led the scoring attack with 12 points and some amazing drives to the basket. Drew was dominate early in the game and scored 7 and Colin Ahearn hit two big threes to keep the Vikings close.  Max once again played well on defense and Kyle Kaminski played an all-around good game and chipped in with 3. Mike Girman, Jake Pancek, and Cole Wolf also pitched in with 2 points each.

The boys were disappointed with the loss, but that didn’t stop them from having a good time at Simon Sez after the game.  Mike Girman impressed many, especially the owner while he pounded down a 2lb triple cheeseburger to go along with a hotdog, large fry, and large milkshake.  Let’s get the next one boys!

The boys 7th grade B team had their hands full last night playing a very athletic and tenacious team from Merrillville.  The Vikes fought back from a 6 point deficit in the 3rd quarter and won 36-30.  I was one of their toughest games all season and everyone on the team should be proud of their accomplishment.  It truly took a team effort to pull out the victory and every player contributed.

Jake Pancek led the balanced scoring attack with 9 points, followed by Eric Yiankes and Kyle Kaminski's 6 points apiece.  Matt Emerson chipped in 4 and made a clutch 3-point shot late in the 4th quarter to give us the breathing room we needed.  Dan Wimberley also was huge hitting 2 big buckets at a crucial time in the game.  Rounding out the scoring was Jacob Wallace with 3, Tony Carpenter with 2, Dominic Snemis with 1 and Daniel Gholston with 1.

Merrillville was the first team all season to out rebound the Vikes but a concerted effort in the 2nd half was evident.  Dan Wimberley, Ryan Wexelberg and Jacob Wallace each pulled down 3 rebounds to lead the way.  Andrew Lehnen played sparingly in order to play in the A game but he sparked the offense by dishing out 4 assists.  Jake Pancek also provided a couple of key assists in the game.

Just a reminder, the B team will be visiting TJ this Saturday for their annual tournament.  The Vikes play Chesterton at 9:45.  Please come root for your Vikings.