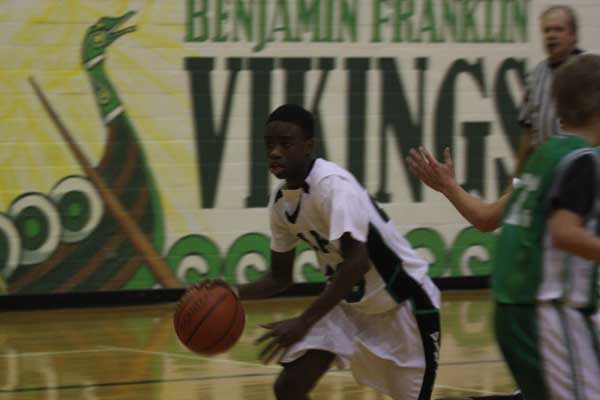 Back it the 70's the Minnesota Vikings had a fearsome defense nicknamed the "Purple People Eaters," and when Merrillville Pierce walked into Boucher last night, their size probably had several fans wondering if it were the Vikings who were going to be snacked upon by the Pirates.

Alas, a BF cager will never go quietly into that dark night, and both squads earned hard-fought victories. In the 8th grade "A" game, BF faced a very formidable foe gifted with speed and height, yet never backed down, playing one of its best games of the year in scuttling the Pirates 41 to 38.

Leading the offense, Alex Healy knocked down 9 points, followed by Bret Boetel and Triston Rouse, who each scored 8. Bret also topped the charts with 4 steals and 4 assists, while Triston battled much taller opponents under the glass to lead the team in rebounds. In the 8th grade "B" game, the second group came out inspired and clamped down defensively, holding the Pirates to 1 first quarter point, but Pierce fought back, and the Vikes had to dig deep to pull away at the end for a 43 to 30 win.

Leading the scoring, Neil Whitfield and Jacob Bekelya topped the team with 10 points apiece. Neil also had a strong rebounding game, while Michael Krutz was stalwart on defense, leading the team in steals while also forcing several turnovers. Kudos to both teams on excellent efforts.