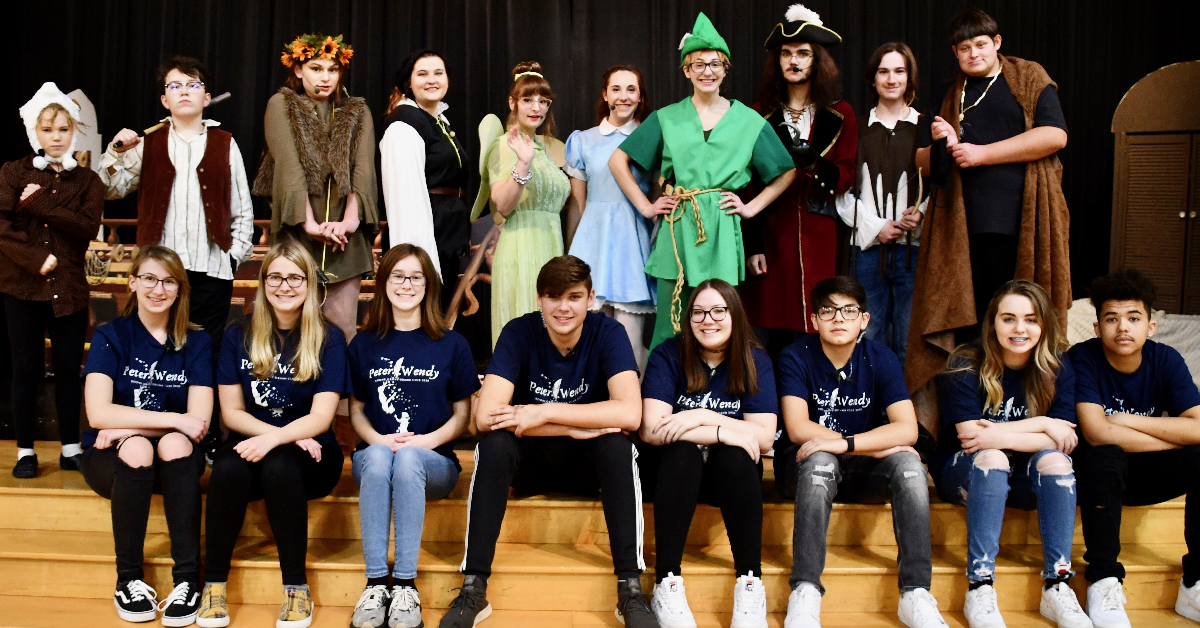 Due to the recent surge of COVID-19 cases in Porter County, the Boone Grove Drama Club performed in front of a virtual audience instead of seeing their spectators in-person. There were three performances total during the weekend of November 19.

“Drama for me is something most people don’t get in their life. It’s a place where everyone is accepting, no matter who they are, and where bonds that’ll never disappear are created,” said Senior Jordan Saunders regarding his experience in the drama club.

This online production of Peter and Wendy was an adaptation of Disney’s classic Peter Pan that was produced in 1953. This production focused on the relationship between Peter Pan and Wendy and their journeys throughout Neverland while battling the formidable Captain Hook and his right-hand man, Smee.

All of the members of the club have been incredibly dedicated to this production, which allowed them to put on a great show that was unlike any other. This virtual, live-streamed production was the first of its kind at Boone Grove. Spectators were able to view the show by purchasing tickets to a live-streamed YouTube video on the drama club’s YouTube channel.

Members of the audience held “viewing parties” to watch the production with their family and friends since they were unable to view the show in person. The drama club expressed their gratitude to all who bought tickets to support the club members and production crew.

Working side-by-side with the drama director, Senior Catrina DeLeon has been striving to make this production the best it could be. DeLeon makes sure the actors are doing what they're supposed to be doing when they need to be doing it. In doing so, she helped the production run smoothly. Her jokes over the walkie-talkies always put a smile on the backstage crew’s faces. DeLeon has been working as the assistant director for two years.

The Drama Club worked around a tight and inflexible schedule this year. Props for the show had to be built in record times, and actors had to memorize their lines in just under a month. Even with all this pressure loaded onto their shoulders, the drama club pulled through and put on an excellent show.

Originally, the only way the cast and crew would be able to meet was virtually on Zoom or in small groups in the library. Only certain groups would be allowed in the gym where the stage is, and times would have to be reserved in advance to make an in-person rehearsal happen.

Lead Set Designer Andrew Mazurkiewicz was in charge of building the props when the crew was finally allowed to use the stage. For this production, he constructed a boat for the pirate crew, along with a variety of wooden swords and daggers.

Mazurkiewicz was so busy soldering the pieces of a broken microphone that he only had a short moment to talk about his time in the club.

“I made a boat and swords,” said Mazurkiewicz before running off to finish his jobs.

This year, the drama tech crew welcomed a new member trainee, Freshman Austin Guerrero. Guerrero was in charge of streaming the entire production all three days.

“We went through three cameras. The first live stream was a complete mess, but we did it in the end,” said Guerrero.

Some of the difficulties that the crew faced during the preparation for the production included numerous technology issues. The crew started out with a $100 camera which had poor quality for its price. Then, the team moved to a GoPro before ultimately “upgrading” to a $30 webcam which got the job done perfectly.

The current technology used for the lights and sound of the production are around 30 years old and on their last breath. The tech crew did an amazing job working with the fossilized equipment and ensuring everything worked properly for the productions.

Even with the many bumps in the road that the technology brought, the Boone Grove Drama Club battled and faced them bravely and still put on a successful production.

Opening night was incredibly stressful for the cast and crew, but they made it work.

“Stepping out on stage in green, I was incredibly terrified. We had never gone through the show with full lights, cues, and costumes all-together. However, once I said my first line, ‘Who is Captain Hook,’ I was reminded that it would all be okay and was also reminded how much I truly loved performing,” said Kate Ward, lead actress playing Peter Pan.

“You never know what your performance did for some of us. You may have inspired a young child to want to become an actor or designer. You may have been the encouragement someone needed to get back up on that stage. You have changed someone's life for the better,” said Stacy Davis, theater director at Boone Grove. “When the lights went down and the curtains went up, you left your stress behind and put on a great show.”