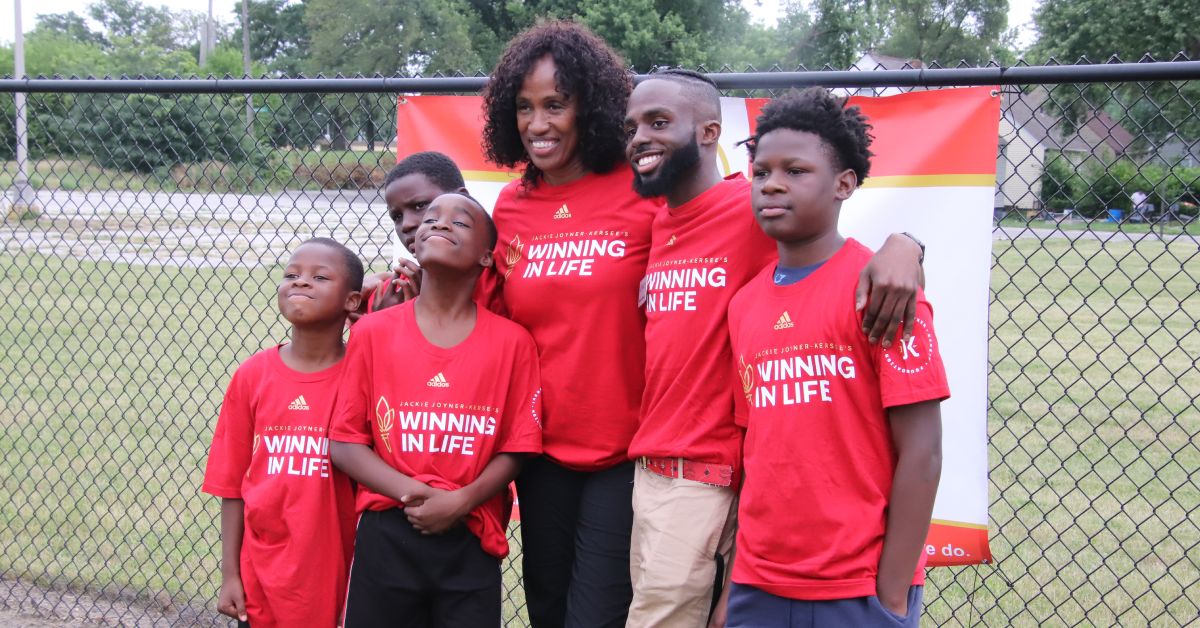 Many long-lasting friendships and memories were made during the Winning in Life program opening ceremony at Boys & Girls Clubs of Greater Northwest Indiana, Gary Club on Monday, July 11. Staff, kids, many important members of the Gary community, and even Olympic medalist Jackie Joyner-Kersee herself gathered to celebrate the launch of a new partnership between Gary Club and the Jackie Joyner-Kersee Foundation.

All those in attendance were excited to see the Winning in Life program launch and the partnership finally come to fruition. The kids even came up with a song and dance based on the program’s new principles to celebrate the occasion.

“It’s been a partnership long in the running. COVID kind of put a pause on everything, so we’ve been anxious trying to get it up and now that they’ve given us some freedom to go back to it we said let’s get started,” said Ellis Dumas, Vice President of Programs and Outcomes.

“It is a program designed to teach kids to win in life by being able to exercise, demonstrate, and display 14 key principles. So not only is it a bunch of fun with really cool challenges, but it is literally teaching skills that Jackie Joyner-Kersee herself lives by and what were the keys to her success,” said Ken Barry, Club Director of the Gary Club.

Gary Club staff are already looking forward to what the Winning in Life program will mean for the children of Gary.

“It’s good for our children in this community to see someone who looks like them who has achieved something so great. The kids are already getting excited about the program,” said Dumas.

Gary Club staff are also hopeful that this program will help bring more awareness to the Club’s mission and show people that the Gary Club is not a place that just watches over children, but a place that furthers the growth and development of kids so they can be successful.

“We’re doing more than just watching kids. We are engaging them in active programming to give them a better future. It is a place where they are going to come and get engaged with different activities and different programming that’s going to spark careers, work, and life-changing thought processes,” said Dumas.

The Joyner-Kersee Foundation is funded by American Water, a company that has served Indiana for over 135 years. American Water’s recent grant of $1 million towards the foundation will be used to expand the program to five economically distressed regions in its service area.

“For more than 135 years, giving back and engaging with the communities we serve is a core part of who we are as company,” said Indiana American Water Vice President of Operations Dan Halverstadt. “On behalf of American Water and the American Water Charitable Foundation, we are honored and proud to play a role in making our communities stronger and to have a positive impact on underserved youth in northwest Indiana by partnering with Jackie Joyner-Kersee and her Winning in Life® program.”

Though the partnership has just begun, Joyner-Kersee already foresees a long future with Duneland Club.

“It’s just been more than we could ever imagine. We got to figure out ways to partner beyond this because this is just incredible,” said Joyner-Kersee.
According to Mayor of Gary Jerome A. Prince, more partnerships like this one are on the horizon for the Gary Club. Mayor Prince is incredibly proud and appreciative of the work the Gary Club has done in expanding to better help the Gary community.

“It’s a huge part of Gary. They’ve come a long way and they continue to grow the program. In about another week we’ll be announcing yet another component and collaboration. That’s not only going to enhance this area but certainly be another bright spot for the city of Gary,” said Mayor Prince.
The Gary Club looks forward to future partnerships so that it can continue to fulfill its mission of helping improve children’s lives and providing them with more opportunities.

“We want this Club to be the reason that there’s an increase in unity and collaboration. So, hopefully, people will see by this partnership that we have with Jackie Joyner-Kersee that we’re open to unity and that we want to work together to make life better for kids,” said Barry.

Kids, staff, politicians, and Olympic medalists alike were thrilled and grateful to start this new journey together. Jackie Joyner-Kersee’s Winning in Life program is sure to start empowering the young children of Gary to believe in themselves and lead them on the path to greatness.

“Be proud of where you’re from, and never let someone tell you can’t achieve anything. Work hard, and turn a doubter into a believer by just believing,” said Joyner-Kersee.

For more information about Boys & Girls Clubs of Greater Northwest Indiana, visit its website at www.bgcgreaternwi.org.