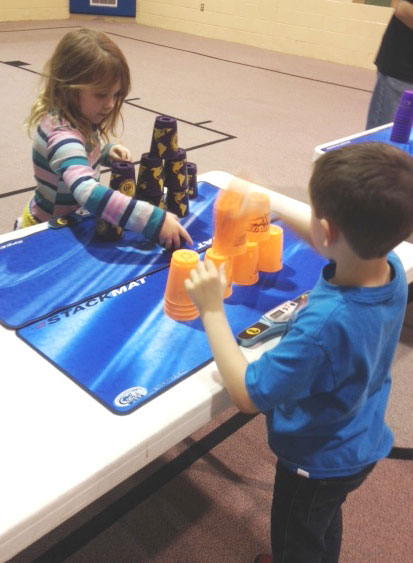 It sounds like such a simple task, stack and un-stack plastic cups in various formations. However, when you add a time-factor to stacking cups and you compete against another person, the competition increases! On November 13, 2014, over 100 Boys & Girls Clubs of Porter County Club members from the South Haven Unit participated in the World Speed Stacking Association’s championship competition. Club member competitors were divided into different age classes and competed for the fastest time of stacking and unstacking cups.

Speed cup stacking is not only a fun and social activity for youth; it helps hone cognitive and dexterity abilities of children. South Haven Unit staff member Chris Allmandinger was instrumental in organizing the championship at the South Haven Unit. “I was very pleased to see that we had 107 Boys & Girls Clubs members participate in the 2014 World Speed Stacking Association event. The Club members had a great time competing and I am looking forward to participating in this event again next year,” states Allmandinger.