Brandon “Da Garbage Disposal” Clark made history at Kelsey’s Steakhouse by finishing the 6-lb Challenge in 20 minutes and 40 seconds, beating the original record by 22 minutes.

The challenge has been available at Kelsey’s for almost 15 years, and, according to staff, only about 1 percent of those who try it complete the meal, which includes the eater’s choice of soup or salad, potatoes, a slice of bread, and the 6-lb steak. Those who finish the $69.95 meal in less than an hour get a t-shirt, a $100 gift card to Kelsey’s, and they do not have to pay for the dish. In 2011, the restaurant was featured on The Travel Channel’s “Big Beef Paradise” special, on which several local football coaches attempted, and failed, to finish the challenge. So, when Clark entered the restaurant, most of the Kelsey’s employees and patrons rooted him on.

“It’s more of a challenge because, when that sits in your stomach, it’s a lot,” Kelsey’s Manager Vicki Panozzo said. “I’d say he has about a 75 to 80 percent chance. If he has eaten that amount of food before, then he probably has a pretty good chance at it. With steak, though, it’s different than ground beef. You have to chew that, and you have to chew every bite.”

Clark came ready to chew, as he completed Slice-A-Palooza in Chicago the night before his attempt at the Kelsey’s 6-lb Challenge. He started eating competitively last year after finally deciding to chase the feeling he got from finishing a challenge at Big Tex Steakhouse when he was 16. Although he almost called himself “The Fridge Raider,” “Da Garbage Disposal” won him over, and he has been demolishing food ever since.

Hailing from the St. Louis area, Clark has finished dozens of challenges throughout the nation. He also previously beat many of Randy Santel’s records. Santel held the record at Kelsey’s until Clark came into town.

“I beat a lot of [Santel’s] challenges. Out in St. Louis, I probably beat about 75 percent of his. Randy has done over 500 challenges, and he travels the world. I don’t do that. I just do the free ones,” Clark laughed.

Eventually, a waiter brought the massive meal out to the table. Clark’s sister and brother-in-law, Amber and Tom Gould along with their daughter, Sady, readied both a Facebook Live video and a recording laptop as Clark prepared to feast. They also moved their chairs away from Clark quite a bit..

“We’ve seen him finish two other challenges,” said Tom. “We know to sit back a bit when he eats.”

With his knife sharpened and a crowd ready to watch the challenge, Clark immediately started on the steak. The first steak vanished about two minutes into the challenge. At about seven minutes in, Clark began eating the steak in cubes instead of using his original strip method, with his second steak nearly gone. Small beads of sweat appeared on his brow as he chowed-down on the third steak.

After finishing the steak and soaking his bread in the juice, Clark started on his potatoes of choice: mashed. Halfway through his potatoes, he chugged the rest of his soup. Soup vanished, and crowd riled-up, Clark used his hands to scoop the rest of the potatoes into his mouth. He then guzzled the rest of his Diet Coke and finished the challenge. When the applause died down, Clark asked a waiter for a bowl of vanilla ice cream. After being asked where he was headed next, Clark jokingly responded, “the bathroom.”

In actuality, Clark plans to take on Industrial Revolution’s Burger Challenge to see if he can beat Santel’s time. As he accepted his shirt and gift card from Kelsey’s Manager Jesus Torres, the employees stared at him in awe.

“I’ll never see something like that ever again,” Panozzo said. “I guarantee it.” 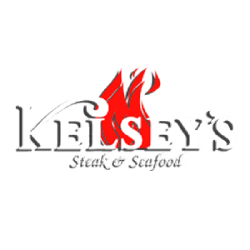