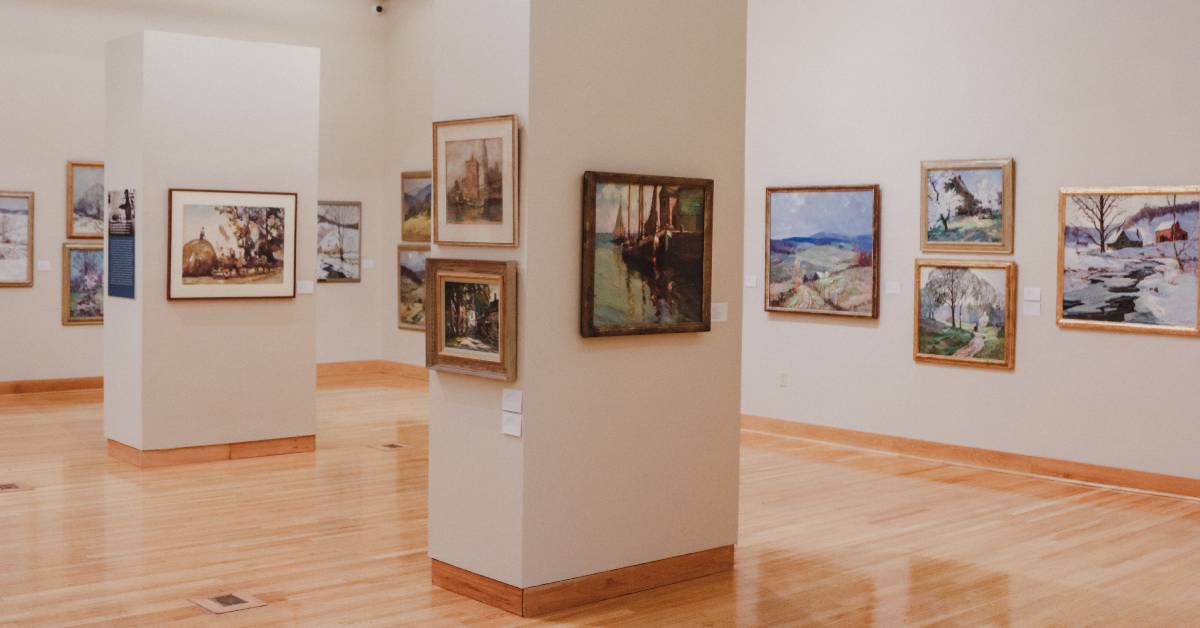 In 1953, Percy Sloan was searching for a new home for his collection of art. His father, Junius Sloan (1827 - 1900) was a prolific painter who spent his life creating works centered on the midwest and the Hudson Riverbank. Percy held 260 of his father’s works and 140 additional pieces he had acquired or painted himself. When he approached Valparaiso University (VU) with this 400-piece collection and the Sloan endowment for upkeep and care, they happily accepted the gift.

At the time, there was no dedicated space for the art collection and pieces hung throughout the university’s buildings with no real cohesion. Until Richard Brauer came along.

Brauer began his tenure as an art instructor and even held the department chair position for 10 years. When he realized the great opportunity the university had to really curate the Sloan art collection, he took on the role of director/curator.

His first step was to find a space to showcase pieces in the collection. A small section of the library became a dedicated museum space, and the Valparaiso Museum of Art was formed. For the next 20-plus years, Brauer focused on expanding the museum’s collection.

“One of his triumphs during that period was to add the Georgia O’Keeffe work and a Childe Hassam painting, both of which are hugely valuable now,” said Gregg Hertzlieb, Director and Curator of the Brauer Museum of Art. “These prescient acquisitions are part of his claim to fame. He took the collection and started to add to it and tell a story of American art, and did that for decades.”

Having built a solid collection of artwork, Brauer saw an opportunity to really showcase the pieces with the building of the VU Center for the Arts. With help from the Urschel family, Brauer and the university set about designing a museum there. The space was named after Brauer and the Valparaiso Museum of Art became the Brauer Museum of Art.

In 1996, Brauer retired. The museum changed leadership a couple of times before Hertzlieb stepped into the director and curator role, where he has remained for the last two decades. Taking an example from Brauer, Hertzlieb has continued to grow the museum’s collection and has worked with the museum’s board to find new and fresh voices in American art.

“The museum has become more organic. It’s now more about reflecting the face of the community and reflecting multiple points of view,” he said. “Ultimately you want to have a collection that’s as authoritative and comprehensive as possible and it’s good to have new pieces come in to keep things fresh. It shows that we are wanting to be more inclusive and tell more stories.”

The museum has also taken on a larger role in educating students, more than just art majors. Religious study professors, economy professors, and even biology professors have used the Brauer Museum of Art.

“Professors and instructors can get the students out of the classroom and use the museum for alternative learning,” Hertzlieb said.

The Brauer Museum of Art is a valuable asset to the Valparaiso community as a whole.

“A community needs an art museum because it speaks to the cultural awareness of that community,” Hertzlieb said. “It’s a respectable museum and comprehensive enough that you can come in and see a good overview of American art. It’s a cultural asset and it affords the campus with an extra teaching resource.”

Having a place for the community to interact with art on a personal level is an important part of the Brauer Museum of Art.

“Art is something you surrender yourself to, you indulge in it,” Hertzlieb said. “There are ideas and concepts that you can get from experiences with visual art that you can’t get any other way. When you get in front of a work of art, it’s like a message in a bottle, the artist is communicating with you over time and distance. When you look at the piece, you get a sense of that message and urgency. You realize that somebody took the time and effort to craft a piece so that we could see it and we have to look at it and complete the circuit, and when we do that, it’s a kind of magic.”

The Brauer Museum of Art now contains more than 5,000 works of art. The permanent collection on display focuses on American artists with a good mix of Midwestern regional art and modern and contemporary art from well-known artists like Georgia O’Keeffe, Walt Kuhn, Ansel Adams, and Andy Warhol, as well as international religious art.

Hertzlieb and his team are curating new exhibits several times a year to showcase the works not on permanent display, and any new works acquired either through purchase or donation. Each year, the museum showcases artwork from the students and professors at VU to keep exhibits fresh and help give exposure to budding artists.

The first-class Brauer Museum of Art is a treat for anyone to visit. Admission to the museum is free and is open to the community. Throughout the year, the museum also hosts family days, gallery talks, or special coffee hours where visitors are treated to a speaker, poet, or activity while enjoying the museum. Make plans to stop in and experience all that art has to offer.