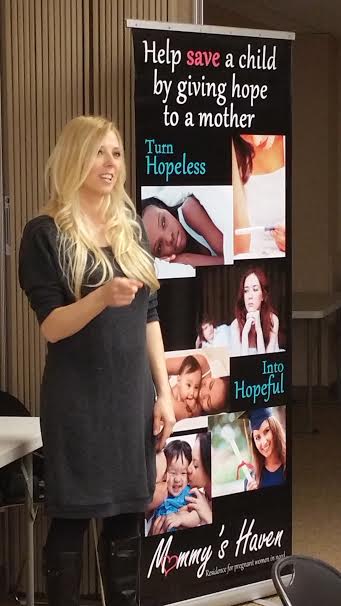 Nothing says it’s Women’s History Month like a group of intelligent women basking in the glory of their respective professions. Once a month, members and guests of Business Women United Network come together to discuss the success of their ventures.

At each meeting someone is given the opportunity to plug their business or organization. Tuesday, March 24, the spotlight was on Mommy’s Haven Founder and President, 34-year-old Lowell resident, Tracie Moldenhauer.

Those in attendance were given more than an introduction of an organization in their startup phase. They were treated to an inspirational story of returning to Christianity, having the courage to quit, dreams come true and a miracle baby.

Prior to founding Mommy’s Haven, Tracie first had to find herself. While she was born in a Christian home, her values were soon pushed aside by teenaged rebellion.

“I ran for a long time before realizing I needed to give my life to the Lord. My attitude was very selfish and my life revolved around me and my wants,” said Tracie.

Everything finally cliqued on what Tracie described as, “one very special Sunday morning.” She recalled the swiftness of it all, “I felt a love I’d never felt before, it happened immediately after getting back in church.”

Tracie was exactly where she needed to be. She’d returned to the faith she rebelled against years before.

She would journey from one life changing situation to another. At the time she was working as an accountant. Tracie handled the accounts of her boss’ four companies.

“I had an amazing job. I worked ten minutes from home, and my boss loved me,” she said.

Tracie continued, “I made my own hours, and a killing in money. I didn’t want to, but the Lord was telling me to quit my job.”

With the support of her husband, Dan Moldenhauer, she would eventually leave. Recalling her last day she says, “My boss could barely understand me I was crying so terribly hard, but I knew it needed to be done and so did he.”

She began volunteering at pregnancy centers. It was her time there that would further ignite her passion for helping pregnant women.

Tracie’s affection for pregnant women stemmed from her own desire to be a mother. Doctors informed her and her husband not to get their hopes up.

As she worked on trying to start a family of her own, Tracie was exposed to the realization of her surroundings. “Some of the women at the centers were heartbroken, they were alone, depressed, sad, and they had no support system,” she said.

“I thought, why am I in a position where I can’t help these women,” admitted Tracie. After many nights of prayer, she received an answer.

“He turned my pain into passion. I wanted to save babies,” she said.

Tracie decided to start her own organization. Mommy’s Haven was established in 2012. Tracie’s dreams of helping pregnant women in need were coming true. “My life changed right away with my focus on the Lord,” she confided.

With faith and hard work Mommy’s Haven is in the middle of a fundraising campaign. The campaign will continue April 18 when Mommy’s Haven and St. Matthias Church come together for their “Spring Into New Life” event.

The fundraiser will be held in Crown Point and will host an evening of fun filled entertainment and fantastic food. Tickets May be purchased by calling St. Matthias Church at 219-663-2201.

Proceeds from all events go toward purchasing a home for the organization. The residence will house five to seven pregnant women and provide office space for staff and volunteers.

When asked how the organization helps pregnant women in need without a residence to house them Tracie responded, “In the past we would find good homes to take the women in. However, we have found that we would be more successful and equipped if we wait till our facility is ready.”

Mommy’s Haven also learned that they were chosen to be sponsored by Trilogy Health Services “Hope for the Holiday’s” fundraiser. Only one non-profit a year is chosen.

The blessings didn’t stop there. Not only did the Moldenhauer’s become foster parents to a beautiful five month old baby girl, they also learned they were expecting.

“I’m 15 weeks along,” Tracie informed while showing off her baby bump. “This really is a miracle baby,” she said.

The Moldenhauer’s have been on this journey, together, from the beginning. “I am so thankful not only for the way God works through me, but for the incredible husband he’s brought me.”

She continued, “My husband Dan has been by my side through it all. He has become an amazing man of God.”

Tracie also shared what she hopes the organization will become. “In a nutshell our desire is to help mend past hurt relationships and experiences by showing the love of Christ along with helping each woman to accomplish her goals.”