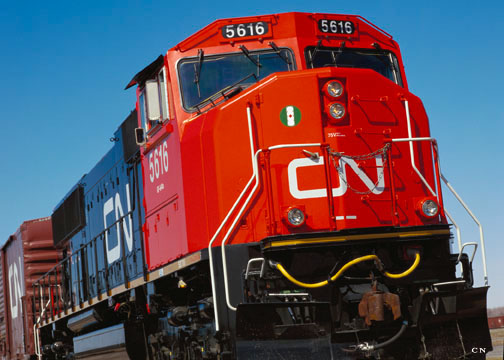 CN, one of North America’s largest railroads, announced plans today to relocate a portion of its operations from Markham, Ill. and fully redevelop the existing Kirk Yard rail facility here, adding up to 251 new jobs by 2015.

CN, which spans Canada and mid-America and reaches the Atlantic, Pacific and Gulf coasts, will invest $163 million in the Gary project. This initial investment includes expanding the railroad classification yard and building a 155,000 square-foot locomotive maintenance and repair facility.

“Whether its bringing dollars back from overseas or from right next door, finding new investments and jobs is always job one for us,” said Governor Mitch Daniels. “Today, we see a product of that effort as one of the leaders of the rail industry chooses Indiana’s lower-cost, business-friendly climate over our Midwestern neighbors and, best of all, chooses Northwest Indiana for its new expansion.”

CN has approximately 20,600 route miles of track offering connections to ports on the Atlantic, Pacific and Gulf. With approximately 22,000 employees, the company’s rail network serves close to 75 percent of the U.S. population and all major Canadian markets.

“Our Kirk Yard improvements will mean significant improvements in efficiency and productivity creating new capacity for growth in the Chicago area and Northwest Indiana,” said Jim Vena, senior vice president, CN Southern Region. “Additionally, the expansion of Kirk Yard represents a significant investment by CN in Gary which will bring hundreds of jobs to Indiana.”

The Indiana Economic Development Corporation offered CN up to $2.95 million in performance-based tax credits and up to $250,000 in training grants based on the company’s job creation plans. The city of Gary also offered funds using revenues generated from the issuance of a tax increment financing (TIF) bond.

“The CN project will contribute greatly to the restoration of the city of Gary’s tax base with significant improvements to its Kirk Yard,” said Mayor Rudy Clay. “This multi-million dollar project will add to our tax base as well as provide opportunities for new, well-paid, full-time jobs for Gary residents. I am gratified that CN has decided to expand in the City of Gary. I am excited about this venture and look forward to the start of construction.”

CN’s relocation marks the sixth company this year to publicly announce its plans to relocate operations from Illinois to Indiana. Most recently in July, Special Metals Corporation revealed that it would relocate its A-1 Wire division from Rockford, Ill. to its Elkhart, Ind. plant, creating up to 100 new jobs by 2014.

About IEDC Created by Governor Mitch Daniels in 2005 to replace the former Department of Commerce, the Indiana Economic Development Corporation is governed by a 12-member board chaired by Governor Daniels. Mitch Roob serves as the chief executive officer of the IEDC. For more information about IEDC, visit www.iedc.in.gov.