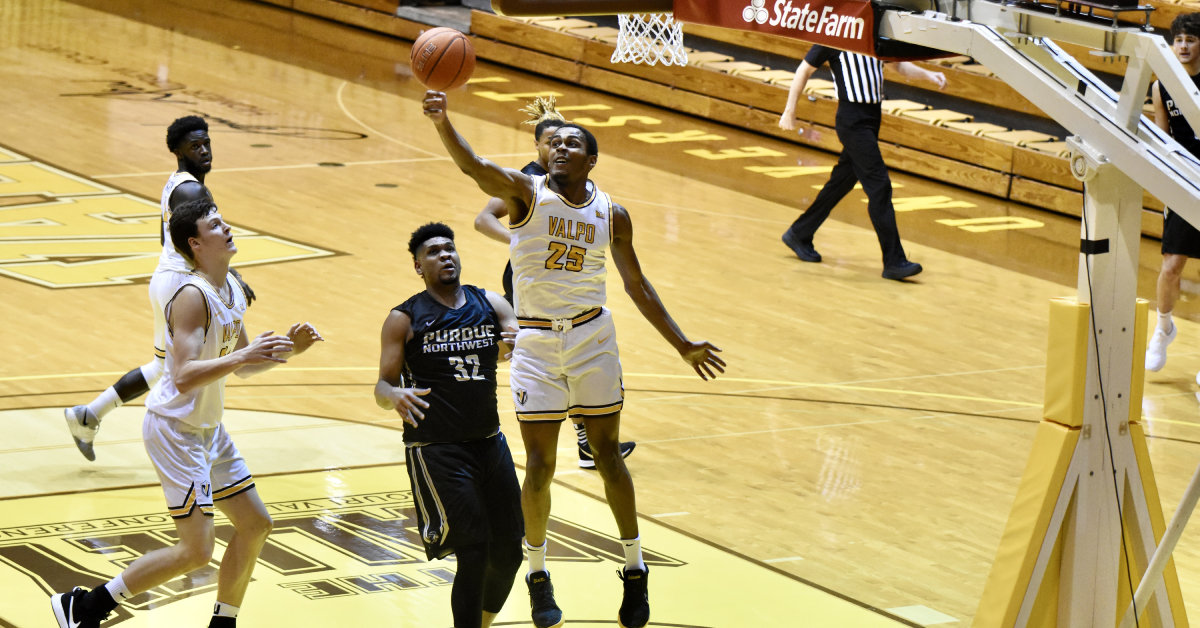 Nick Robinson put together the highest scoring output of his Valparaiso University men’s basketball career, pouring in a team-high 21 points to lift his squad to an 89-71 victory over Purdue Northwest on Thursday evening at the Athletics-Recreation Center. Valpo pulled away late to move to 3-0 at home on the young season.

· A triple by Connor Barrett four minutes into the contest lifted Valpo to an early 8-2 lead, and later Jacob Ognacevic slammed home a dunk to provide the hosts with their first double-figure cushion at 16-6.

· Valpo put together a quality burst from the 8:55 mark of the first half to the 7:10 mark, scoring seven quick points to widen an 11-point lead to 18, a run that was capped by another Barrett 3.

· Purdue Northwest closed the first half on a run, cutting a 20-point Valpo advantage to 13 by scoring the final seven points of the half.

· Another seven-point spurt helped PNW close to within seven with 14:32 left in the second half, and the Pride got as close as five with 13:37 remaining.

· An old-fashioned 3-point play by Robinson with 9:47 on the clock pushed the Valpo lead back to double figures, and the Brown & Gold owned a lead of 10 or more the rest of the way.

· Sophomores Krikke and Clay both threatened double doubles, as Krikke finished with 12 points and a team-high eight boards, while Clay had nine points and squeezed seven caroms.

· Krikke’s eight rebounds tied a career high that was established on Feb. 1 of last season vs. Illinois State.

· Clay also turned away five shots, shattering his career best for blocks. He became the first Valpo player with five rejections in a game this season and first since Jan. 26, 2019, when Jaume Sorolla had five vs. Drake.

· Robinson’s 21 points represented his first 20-point game in a Valpo uniform. His previous personal best was 19 on Nov. 12, 2019 at SIUE. He also swiped three steals, his fourth-career three-steal game.

· Robinson was one of seven Valpo players with multiple steals in the game. The team swiped 17 steals and forced 28 Purdue Northwest turnovers.

· Daniel Sackey dished out a team-high six assists to lead an 18-assist effort.

· Valpo shot 81.3 percent from the free-throw line and outscored PNW 26-8 at the stripe.

· PNW’s Vincent Miszkiewicz had a double-double of 17 points and 16 rebounds, becoming the first Valpo opponent with 15+ rebounds in a game since UNLV’s Shakur Juiston had 19 on Nov. 28, 2018. Seven of Miszkiewicz’s boards came on the offensive glass.

· Valpo extended its home winning streak to six dating back to last season. All six triumphs have come by 12 points or more. Valpo has won eight straight nonconference home games dating back to Dec. 17, 2018. The team is off to a 3-0 home start for the fifth straight season.

Valpo (3-4) will visit Toledo for a 1 p.m. Central Time tip on Saturday in a game that will be broadcast on ESPN3 and the Valpo Sports Network – 95.1 FM Valparaiso and the TuneIn Radio app. Links to live video, audio and stats can be found on ValpoAthletics.com.