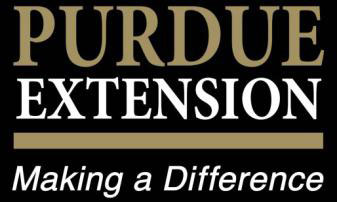 Several calls and e-mails have been received with concerns of the invasive and potentially dangerous weed species giant hogweed. There has been a recent increase in public awareness of this species due to reported sightings, though we have yet to hear of actual confirmed sightings of Giant Hogweed. The worry from Purdue Weed Science is that the public may be on too high of an alert due to misidentification of Poison Hemlock or other species as Giant Hogweed.

Giant Hogweed is an invasive species that is on the federal noxious weed list for multiple reasons. It grows very aggressively to heights of 10 to 15 feet and creates canopies that block out native species. Giant hogweed also poses a health risk to humans as it creates a sap that causes photo-dermatitis or sensitivity to light that creates blisters and lesions on the skin. Giant hogweed is a member of the carrot family and has the characteristic white umbel of flowers, which coincidentally looks very similar to Poison Hemlock that is also a member of the carrot family.

The sudden increase in awareness of Giant hogweed and large amounts of Poison Hemlock that is currently flowering on roadsides is likely leading to the general public misidentifying Poison hemlock as Giant Hogweed. Giant Hogweed is fairly rare in the state of Indiana and monitored closely by the Indiana Department of Natural Resources. The IDNR has reported few sightings, but has also reassured that those plants had been eradicated. The awareness of Giant Hogweed is warranted because of its health hazards and invasiveness, but we would like to avoid public panic due to misidentification.