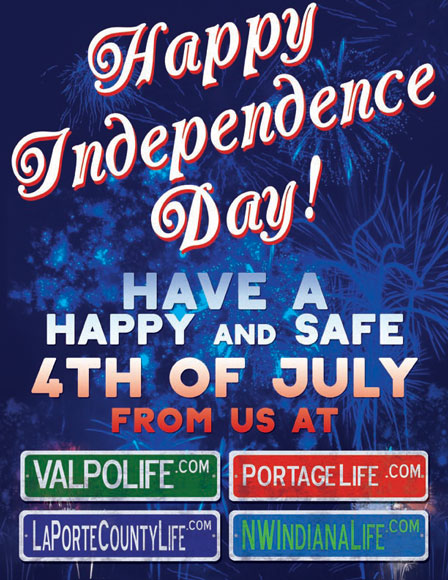 July 2: Fireworks on the Lakefront - postponed until July 5
Come out for a 4th of July celebration you won’t ever forget! Held at the Indiana Dunes State Park, National Lakeshore and Town of Porter, this family-friendly event features fresh food merchants, a live rock concert, and fireworks! This event will take place 5:00 pm to 10:00 pm.

July 3: 4th of July Fireworks at Centennial Park
Come out to Munster for an early Independence celebration beginning at 6:00 pm. There will be concessions and a beer garden, a VIP buffet, and live music from 7:00 to 11:00 pm featuring JAMROSE. Fireworks will be featured at 9:00 pm.

July 4: Family 4th Fest
Hawthorne Park in Porter will play host to an all day long fourth of July event. The day starts out with a Pancake Breakfast from 7-11:30 am. The parade will run through Porter at 9:00 am. At 10:30 am, the festival will open, featuring bounce houses, food, refreshments, beer garden, poster contest, games, music, and fireworks, along with the annual Turtle Derby.

July 4: Patriotic Program at Millennium Plaza
The annual event begins at 8 am with the posting of colors and a 21-gun salute.

July 4: Hobart 4th of July Parade
The 2013 parade will commence at 10:00 am, beginning at Mundell Field. This year’s theme is “Celebrating the Hobart Family”

July 4: La Porte 4th of July Parade
The 67th annual La Porte Jaycees’ 4th of July Parade will run down State Road 2. Then at dusk, come out to the La Porte Fairgrounds for beer barns, a corn hole tournament, food vendors, a DJ, and fireworks!

July 4: Pride in Portage Parade
The annual Independence Day parade will take place at 11:00 am and run down Willowcreek Rd. A festival will take place later on in the day at 5:00 pm, with live music and a fireworks display at dusk.

July 4: Crown Point July 4th Parade
The parade begins at 2:00 pm, at Taft Junior High School. The route will travel north on Main Street to the army tank. At dusk, come out to the Lake County Fairgrounds for a fireworks display!

July 4: Munster Parade
An Independence Day parade will begin at 2:00 pm, starting off from Calumet and Ridge Road.

July 4: Fourth of July Blast
Come out to Thomas Jefferson Middle School in Valparaiso for the posting of the colors, reading of the Declaration of Independence, with music following and fireworks at dusk!

July 6: The Big Parade
The 56th Annual Parade takes place along Franklin St in Michigan City, starting at 11 am.