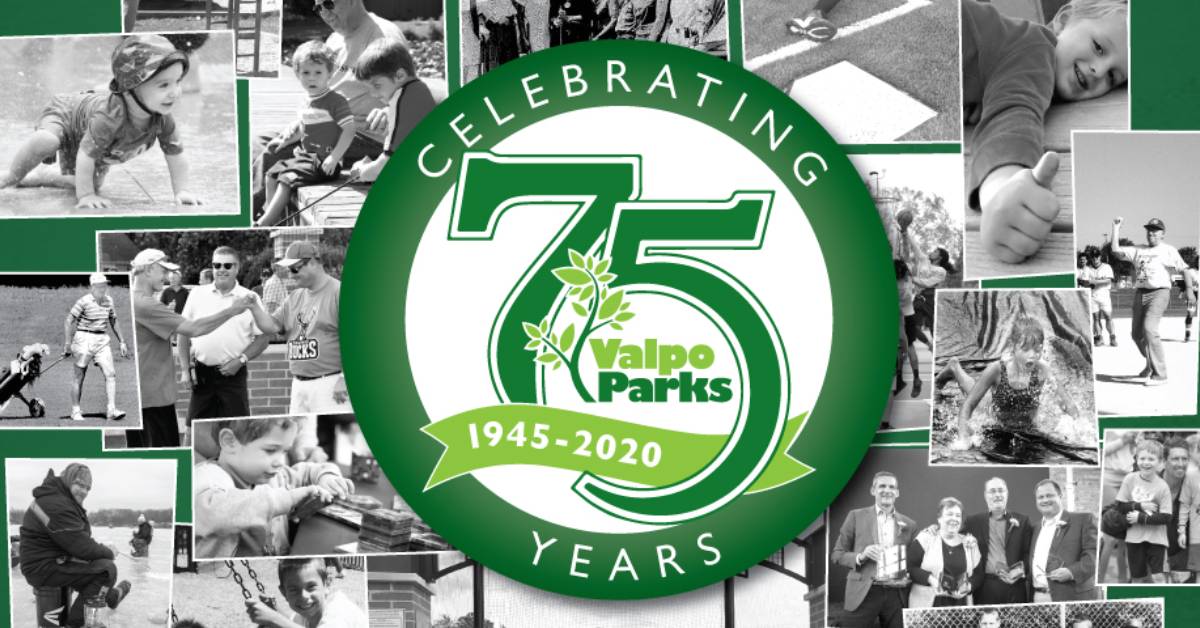 2020 will be a big year for the city of Valparaiso in many ways—a new administration, new economic development, and the celebration of the 75th anniversary of the Valpo Parks Board. Throughout its history, the parks department has grown a lot but through it all, one thing has remained the same: the department’s relationship with the community. And what better way to commemorate the partnership between Valpo Parks and the community than with a year-long celebration?

John Seibert, Director of Parks & Recreation, said the 75th anniversary is a collaborative celebration with the community.

“It’s not a celebration of us, it’s a celebration of what we did together with the community,” Seibert said. “All of these parks have been a result of the community that built them. It’s not because we did it for them, they did it with us, and all the programs occurred because they volunteered to do them.”

From January until the marquee event, Party in the Park on June 12, Valpo Parks will be celebrating a different decade of the department’s history, starting with the ‘40s. Every Thursday, the department will be posting pictures from their archives on their social media pages.

Kevin Nuppnau, Business Operations Director at Valpo Parks, said the department will be using it as an engagement tool for people to respond and grow the department’s archives.

“I’m looking forward to seeing how people connected with the parks for over 75 years. We’re hoping people will post if they know who is in the picture that we may not have a record of,” Nuppnau said. “On Sundays, we’ll be sharing newspaper articles from that decade. Going through the archives and pictures has been really fun to see and to be able to tell the story and the history of the parks.”

In addition to taking social media to expand their reach, the department will be using the platforms to find out how the community would like to improve current parks and what they would like next.

“It’s cool to see what people had back then and what they want to see in the future,” said Marissa Gentry, Digital Marketing Specialist.

“We have plans for every park, but we want to hear what the community wants. We want to know how we can make the parks better than what we’ve already come up with,” Seibert said.

Although the park board wasn’t formed until 1945, the city’s history of parks began in 1918 when Frederick Kirchhoff donated his property off of Roosevelt Road to the city with the understanding that the land would always be used as a public park.

For the next 25 years, there was little discussion regarding the continued growth of the park in the community. When the park board was formed in January of 1945, it was the first time the city had anyone overseeing parks. Mayor Garrett D. Conover appointed Carl D. Rees, Mary S. Myers, Joseph C. Saunder, and W.E. White as the original board members to govern the newly formed department—and history was made.

“It’s always been about creating memories. We gather people together, conserve things and do a lot of other things, but creating memories is what we’re trying to connect people with for the 75th anniversary,” Seiber said. “We’re doing that with people who are young right now that can connect with something, and we’re connecting with people who remember when they were with their parents, or their grandparents, or their friends when they were growing up. That’s what the parks offer to people.”

Be sure to follow Valpo Parks as they continue to showcase their 75 years of history on their Facebook and Twitter pages. For more information on Valpo Parks, and the 2020 activity guide, visit their website.