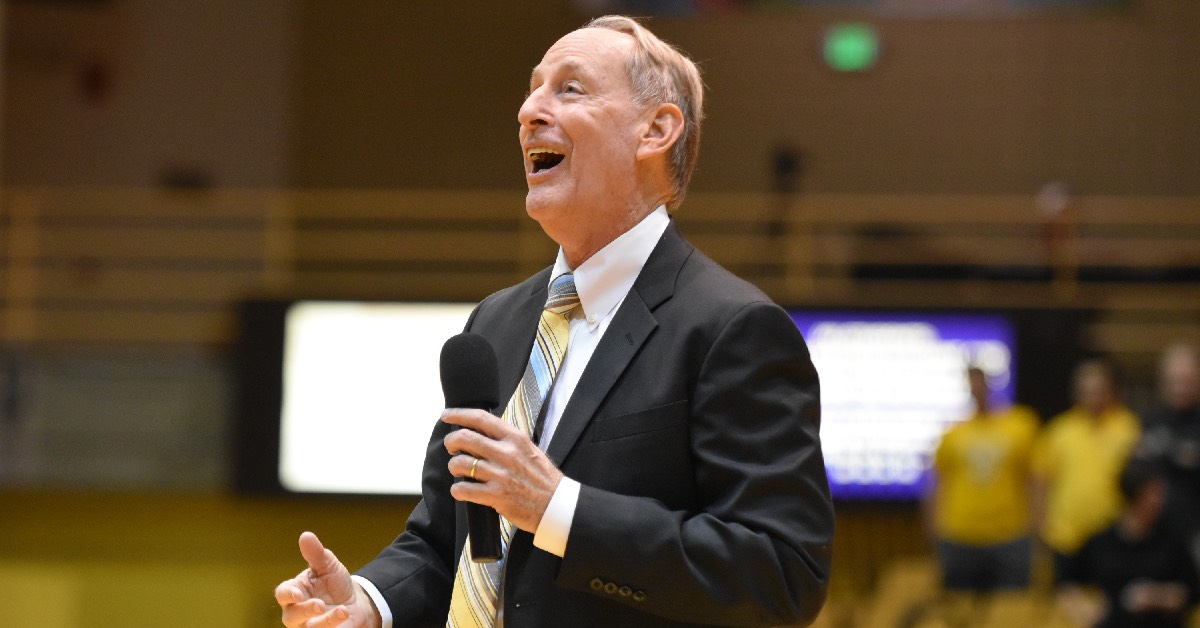 On December 8th, Valparaiso University honored the legendary Homer Drew for his recent induction into the National Collegiate Basketball Hall of Fame. Drew was a fixture on Valpo’s sidelines for more than two decades, leading the program to 371 victories and nine postseason appearances. During his coaching career, Drew received the Naismith Good Sportsmanship Award in 1998 and was presented with the Mid-Continent Conference’s Commissioner’s Award of Merit in 2002. He is among three coaches and six players who comprise this year’s Hall of Fame class,and Drew is the third former Valpo coach to earn a spot in the National Collegiate Basketball Hall of Fame.

Prior to the start of Valparaiso University versus Central Michigan University game, the ceremony was held. Senator Ed Charbonneau presented Coach Drew with a citation from the state of Indiana. A banner was raised commemorating his Hall of Fame induction.

The Valpo legend himself had words for the crowd from the very court named after him. The words were of gratitude to Valparaiso mixed with remembrance. One particular memory he shared was of the time Dick Vitale came up to him after a Notre Dame game telling Drew something he would never forget.

“He said, ‘Coach, your fans are energetic. They are warm, they are friendly, and I had a great time.' So I got to share with Dick Vitale all of you, and how you made myself and my family enjoy being here at Valparaiso. So thank you!” said Drew.

This is not the first time Drew has felt the love of Valparaiso University. A four-time Mid-Continent Conference Coach of the Year, Drew led the Crusaders to eight regular season conference championships, eight conference tournament titles, and 10, 20-win seasons. In 1999, Drew was presented with the Lumen Christi Medal, Valparaiso University’s highest honor, in recognition of a lay person’s distinguished service to church and society. He was also honored as one of the 150 most influential people in Valparaiso University history as part of Valpo’s 150th anniversary celebration in 2009. In 2010, the playing floor in the arena of the Athletics-Recreation Center was named in his honor.

Coach Drew was honored to be here accepting the award and was excited to attend a game, but it was clear when he later spoke that there was something more important to him.

He reflected on a special moment after a hard loss against Arizona State while in Arizona. This was the first time Valpo had made it into the NCAA tournament. Feeling dejected he was leaving when a woman came up and put her around him. She told him she was Bobbi Olson, wife of Arizona State coach Lute Olson. She then proceeded to compliment the VU team for never giving up and then told him VU would be back.

Coach Drew currently lives in Nashville and is still busy with basketball, five grandkids, and charity work. He confirmed the rumor that he in fact is coaching again but this time his role is a little different.

“I am an assistant coach for my son-in-law Casey Shaw. He is coaching his three sons who are my grandsons. So I protect my grandsons from their coach. That’s my job,” Drew said with a chuckle.

Before wrapping up, Coach Drew took some time to meet with the Boone Grove Middle School Boys basketball team who were in attendance. He gave high fives and advice of working hard.

Coach Drew did have one last request for those in attendance.

“These men are in a new conference that is one of the most strong and difficult that Valparaiso has ever been in,” said Drew. “This team needs all the energy and all the support, so I want you to give it to them!”

To see Homer Drew’s new banner in person and to support the Valparaiso University Men’s Basketball Team, who finished today's game with a 77-55 win against Central Michigan, visit their website for more information on upcoming games: http://www.valpoathletics.com/mbasketball/schedule.