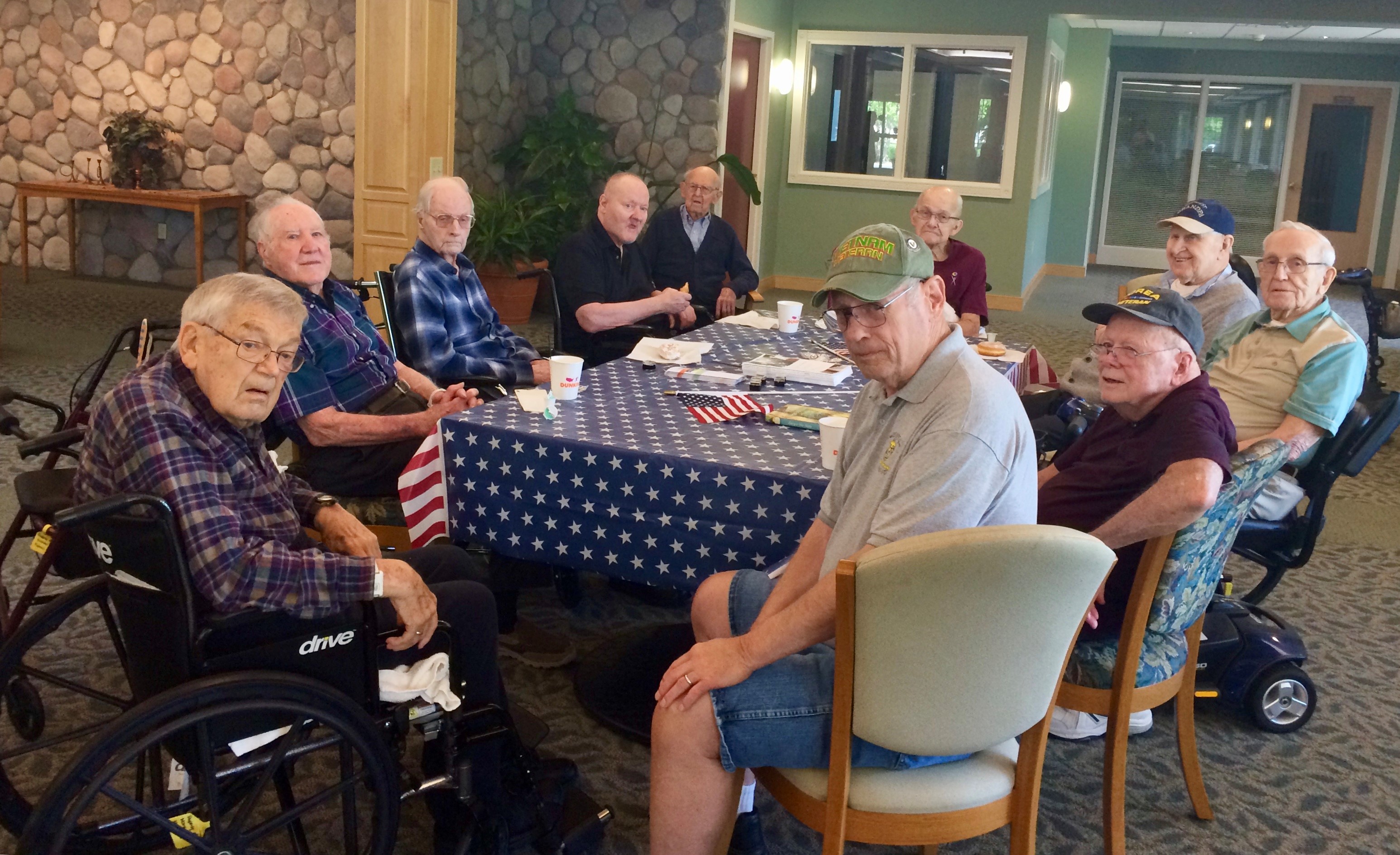 Center for Hospice Care (CHC) is proud to be part of the “We Honor Veterans” program, a collaboration between the Department of Veterans Affairs and the National Hospice and Palliative Care Organization. Its purpose is to raise awareness among veterans of the end-of-life services and benefits available to them.

Center for Hospice Care has achieved the Level 4 designation, in the “We Honor Veterans” Partner program. As a Level 4 partner, CHC integrates veteran-specific content into staff and volunteer training. CHC is also in the process of implementing more services and programs to achieve the newly created Level 5 partnership. Simple acts of gratitude at the end-of-life can make up for a lack of appreciation or recognition during the veteran’s lifetime, especially for those who were never properly thanked for their service.

As part of CHC’s commitment to veterans and to achieving the Level 5 partnership, CHC is honored to host several “Vet-to-Vet Cafés” across our service area. These events are informal gatherings of area veterans to give them a chance to reminisce, catch up and share their experiences. CHC brings the coffee and donuts, and provides an opportunity for veterans to continue to build upon a common bond.

On Wednesday June 26, CHC held a Vet-to-Vet Café at Southfield Village, an assisted living facility in South Bend. The event was attended by ten residents of Southfield Village who were veterans of the United States armed services. Eight were World War II Veterans; One was a veteran of the Korean War, and one was a veteran of the Vietnam War. CHC is also a Vietnam War Commemorative Partner with the Department of Defense, enabling us to provide special pins to veterans who served during the Vietnam War.

“Hosting these events is one way that Center for Hospice Care can show our respect and appreciation for those who have served our country,” said Mike Stack, professional liaison with CHC. “I asked each of them which war they served in and in which branch of the armed services. The last man to join us was Mr. Lindley was 101-years old.”

When Mr. Lindley was asked to confirm that he served in WWII, Mr. Lindley quickly replied, “Ha! At my age I was probably in the Spanish-American War! Yes, I was in World War II. I was in the Army. Infantry. I walked!”

Several of the other veterans in attendance shared their stories. Mr. Fodroci explained that he was a bombardier as part of a crew in a B-17 who flew 34 missions over Germany during WWII. Dr. Hamilton talked about being an intern with Memorial Hospital in South Bend before he enlisted in the United States Army. “When I got overseas, I quickly had to learn how to become an Army doctor,” Dr. Hamilton said. When he returned to South Bend, he started his own practice and was later affiliated with Memorial Hospital in South Bend for 40 years.

Mr. Handshoe described his deployment journey to the Korean War. “It took us 21 days on a ship to get from San Francisco to Japan,” he said. “We stopped in Hawaii and they gave us 12 hours to get off the ship and do whatever we wanted. Some of the guys never got back on the ship…. who knows what happened to them!”

“They can earn a nice living in the Military today,” noted Mr. Finney who served in the Vietnam War. “When I served, I was paid $77 a month. And everyone now is so technologically proficient. You can text or email your family everyday now. I felt fortunate to get a letter from home every three or four months. We were just bullet catchers.”

“There was a lot of tragedy,” Mr. Lindley said. “A lot of tragedy. None of us thought we’d make it home. And here I am still kicking at 101.”

Each veteran received a CHC We Honor Veterans pin, and Mr. Finney also received a Vietnam Veteran pin. “The men were all very appreciative and we decided on the spot to host another Vet-to-Vet Café at Southfield Village on Wednesday, July 24 at 10:00 AM,” said Stack. “It was truly an incredible experience.”

To learn about Center for Hospice Care, please visit cfhcare.org. If you are an organization and are interested in hosting one of CHC’s Vet-to-Vet Cafes, please contact Peter Ashley at ashleyp@cfhcare.org or 574-367-2457.