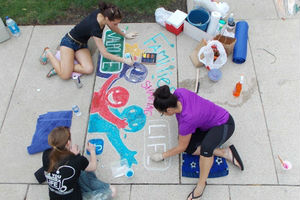 For the second year in a row, it will be a colorful summer on the sidewalks in downtown Valparaiso.

That’s because ‘Chalk the Walk,’ a fun event held to support the Family and Youth Services Bureau, is making a return to the Porter County Courthouse on Saturday, June 14.

In its inaugural go-round last year, Chalk the Walk raised nearly $14,000 for the FYSB. Jackie Gray, director of development and community relations, says the goal is to bring that number up to $20,000 in 2014.

“It’s not only about bringing in money for FYSB, we want to provide something fun for families of the community and raise awareness of the agency, which is priceless,” Gray said.

From 8 a.m. to 1 p.m. on June 14, area artists will design squares in front of the courthouse for their sponsors, which include a number of area businesses. Sponsor levels include a $150 donation that buys one square, a $500 gift that will result in two squares, t-shirts and additional promotions and a $1,000 level that buys three spaces that will be in what Gray calls the “prime spot” in front of the Courthouse on Lincolnway.

The idea for ‘Chalk the Walk’ to come to Valpo stemmed from a community Gray previously lived in in California. There, Gray said the event was called “Pastels on the Plaza,” but everything was similar in terms of artists decorating squares of sidewalks downtown for sponsors.

“They did the event in California for 25 years and had 100 squares filled,” Gray said. “In just one year here in Porter County, we had 100.”

Horizon Bank has been the number one sponsor both last year and already this year signing up for one of those $1,000 prime spots.

“We were not only a major sponsor of the event last year, but I attended and was blown away at the great artists in our community,” said Dorcas Hammonds, AVP business banker at Horizon Bank. “Several of our customers had done drawings and I didn’t know they had such talent It was fantastic, and we again have some students that will be doing our drawing again this year.”

Hammond recommends area residents to come out on June 14 even if they aren’t a part of a business sponsoring the event because it is “a free, fun thing to do for a family, young and old.”

“You are supporting people in our community that are working to better themselves and help the community be a better place,” she said.

Laura Gerhardt of Absolutely Dry, a a structural drying company based out of Chesterton, will sponsor two spaces this year, one for her disaster recovery business and another for Immanuel Lutheran School, where her 11-year-old daughter is a student. Her daughter will work on one of the squares, while Immanuel art teacher Kristen Carney will do the other.

“This is a great way to support the Bureau and the school,” Gerhardt said, pointing out that even in a month with a lot of rain, the chalk “stays there for so long.”

If it does rain during the event, however, Gray says it will be pushed back to the afternoon and the next day if rain is in the forecast throughout June 14.

A little rain never deters the passion of the crew at Ideas in Motion Media, who will again decorate a square. Shawn Barnes, graphic designer at IIM, said last year’s ‘Chalk the Walk’ was “a lot of fun” as she looks forward to designing the square again this year.

“We had one of the larger squares (last year), so filling up all the space was kind of labor intensive, but the results were worth it,” Barnes said. “I was impressed by all the different themes and designs the other artists produced around the square. The general theme from last year was "family," so our square featured a cartoony, colorful family and their dog and the words "Families Sharing LIFE.”

Jodie Hammonds is another artist who participated last year and will again in 2014.

Her “all-time favorite part” about last year was “finally getting up from my drawing, and getting to see what the other drawings were,” she said.

“Every artist was so friendly and positive towards everyone. It was a great experience. My sponsor is the company I work for Gortrac, a division of A&A Mfg.”

Hammonds said this year she is going to draw “The Kraken” - a the mythical under the sea creature with tentacles disrupting the Ocean.

Gray encourages sponsors to select their own artists.

“There is probably an artist you know, maybe someone from back in high school that has done some art work,” she said. “That way it works out better for everyone because those are the artists that will have the strongest connection with your business.”

The Family and Youth Services Bureau is looking for businesses, organizations, families and individuals to be a part of the second annual ‘Chalk the Walk’ event.

They are recruiting artists so sponsors who are unable to find one will be assigned an artist for the event.

To signup as a sponsor, go to the Family and Youth and Services Bureau homepage and follow the steps to download the registration form.