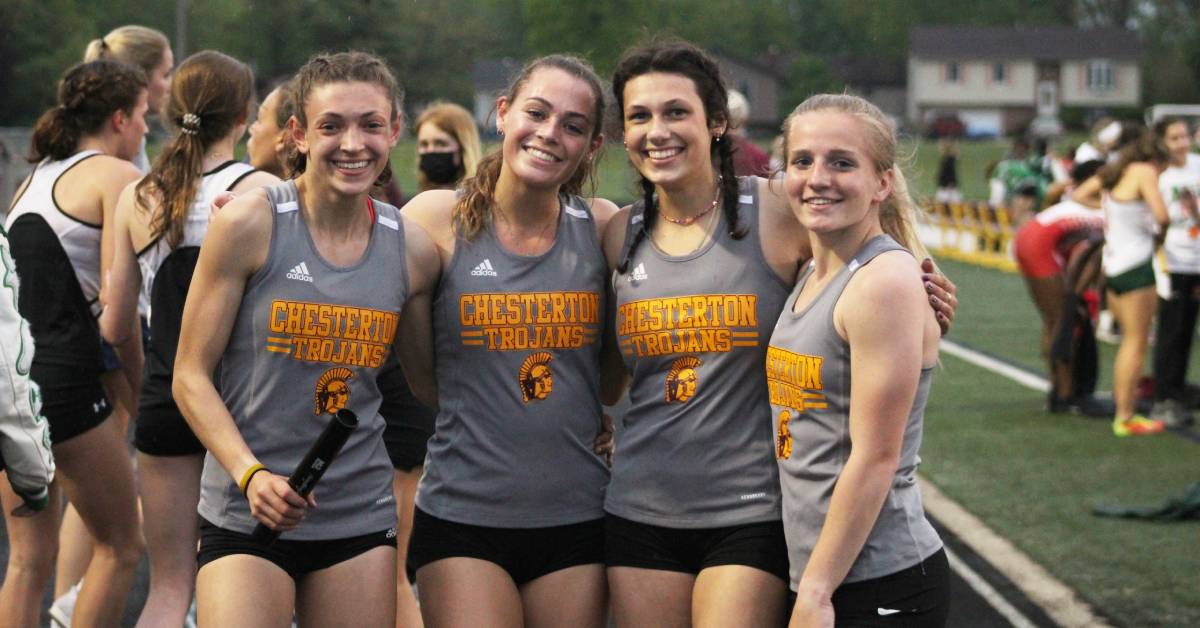 Starting off, Valparaiso was in the lead but then in the last round Bailey Ranta (11) pulled through, pushing herself hard and past every surrounding teammate. As Ranta says she was “5 or 6 off the record” during this event.

“I think [the first run] is a PR for our team,” said Ranta. “It really was just working hard for our workouts and just pushing ourselves at practices, and it's really starting to show off when we need it to be.”

This was not the only time Ranta pushed through and scored high for her team. Ranta got second place in 1600 meter run after Valparaiso runner Kaylie Politza (11) and first again in 3200 meter run.

Bailey Ranta wasn’t the only star player for tonight, as Kaylie Politza from Valparaiso also dominated the races she ran in.

“I think today I just really want to get some good work in because I'm going to try and qualify for state,” said Politza. “So I think this is kind of more about replicating that to kind of build up my aerobic base and just kind of prepare myself for the meets coming up.”

About an hour in, all teams were faced with rain but that didn't stop the team spirit from all teams.

“The rain is nice. It was kind of counteracting the humidity so it was a good race,” said Politza.

Personal Records (PR’s) were made all throughout the event from all schools. An example of that is Elizabth Ford, Portage High School track runner, as she beat her PR today during high jump.

“I feel pretty great, I'm really happy,” said Ford. “I just PR five foot and my future goals are to go even higher than that.”

Team spirit was a key factor that was obvious for anyone who attended today. It did not matter what school you came from, after every race the runner in front, behind or next to you would show their support sometimes with a hug even.

“There's some really great girls in the field that were really pushing me, so it was a great race and I'm happy for all of them,” said Valapraiso runner Politza. “I'm excited because Chesterton has a really good anchor so I'm excited to run against her again.”

For Valparaiso, this meet was special as they almost had a full roster again after having 22 athletes having to quarantine during the season. Being healthy and pulling through for sectionals is something that is important to the Valparaiso Vikings Girls Track team.

Today was important to the teams as this will either be their last meet or they will be moving on to regionals.

“It's awesome to get first and second place at sectionals. We just need to keep working hard and see if we can put that to regionals because I know most of those ladies have aspirations to make it to state,” said Micheal Walker, Valparaiso High School Girls Track and Field Coach.