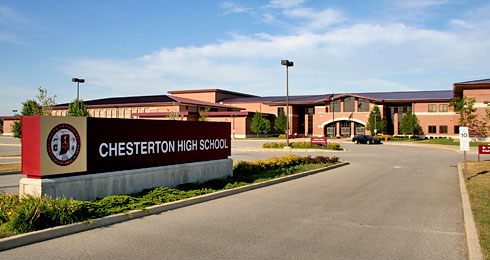 The CHS ensemble performed in what is known as the Group I division which is a class of competition dedicated to the more experienced high school ensembles that are capable of performing advanced high school and/or college and professional level music. The group was judged in all areas of Big Band jazz performance including solo improvisation. The three judges unanimously awarded the Chesterton band a Superior Gold division rating for their performance.

The group performed three selections at the festival, including a rather slow and quirky piece by composer Michael Mossman, that eventually turns into an up-tempo swing chart entitled, “Mia’s Lamplight Foxtrot.” This piece featured two duets, the first by alto saxophonist David Hodgkiss and trumpeter Jacob Winland, and the second by alto saxophonist Devin Moser and trumpeter Joe Stento. The work also featured sophomore David Hodgkiss on an improvised alto sax solo.

The group’s second music selection was a Big Band arrangement of a well-known ballad from the American songbook entitled, “Dream,” arranged by Al Cobine. The band closed their festival performance with a high energy Les Hooper composition reminiscent of the Funk-Rock charts of the 1970’s entitled, “Perpetual Commotion.” This piece featured two student improvised solos, Bobby Gotsch on guitar and Mark Hodgkiss on tenor saxophone.

Upcoming performances for the group include the Valparaiso University Jazz Festival on Tuesday, March 29 at 6:30 p.m., and a brief performance at the 5th Annual Duneland Education Foundation Gala event on Friday, April 22. The band will complete their scheduled performance season and celebrate 43 years of jazz education in the Duneland community when they perform at their own spring concert, “All That Jazz” Opus XLIII on Saturday, May 14 at 7 p.m. in the CHS Auditorium. At this event, members of the CHS Jazz Ensemble will have the opportunity to work with and perform with several world-class professional musicians.

For more information on these events, contact the CHS Music Department 983-3730.