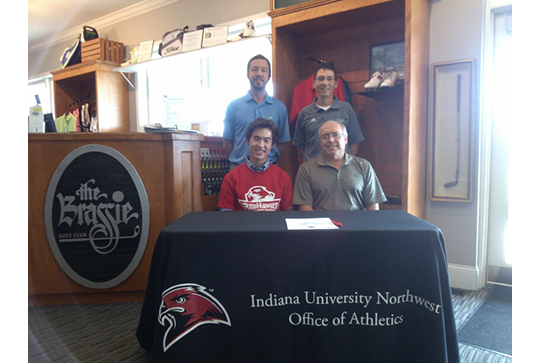 Eric Richardson, the son of Gary and Sarah, is a Chesterton High School 2016 Graduate. After graduating with an honors diploma this June, Eric plans to major in Business at Indiana University Northwest. His academic success combined with his golfing talents makes him a great addition to our RedHawk golf program.

Over the past three years while playing for coach Kent Butler, Eric has posted scores of 74 at the Lake Central Invite, a 77 at Coyote Crossing in Lafayette, as well as a 76 in Sectionals. Eric also placed in the top 25 of the nation's oldest golf invitational last spring.

Eric, along with his father and Coach Butler joined RedHawk Head Coach Ryan Bishop and Director of Athletics Kristofer Schnatz at The Brassie Golf Club Thursday afternoon to sign his letter of intent to compete next season for IU Northwest.

Coach Bishop is excited about his first 2016 recruit. “Eric will represent our young program in a positive way both on and off the course” said Bishop. “We are committed to building a strong foundation with high character student-athletes like Eric Richardson” he added.

Indiana University Northwest would like to officially welcome Eric Richardson to our RedHawk golfing family next fall!