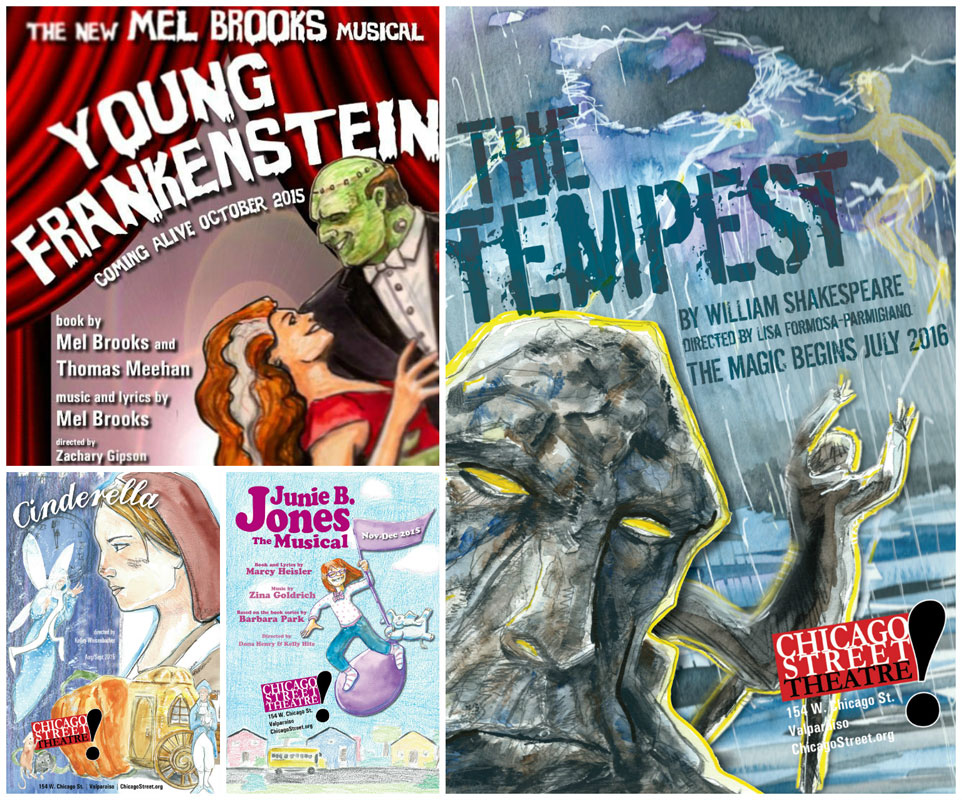 Chicago Street Theatre is very excited to announce its 2015-2016 Season as they prepare for their free public performances of Hamlet for the 4th Annual Shakespeare in the Park performances on July 10 and 11. Tickets and Viewer's Choice season subscriptions will be available for purchase starting on Wednesday, July 1, 2015 through the CST Box Office at 219-464-1636 X1 and on their website at ChicagoStreet.org. Box Office hours are: Noon to 4 PM weekdays and two hours prior to performance times. Brochures for the new season will be on hand during the park performances and street fair.

For Season 61 the not-for-profit volunteer theatre has selected an eclectic mix of musicals, comedies, dramas, family presentations, new works and cutting edge shows that have gained them an impressive reputation throughout the region. This year the award-winning company will be taking on two new musicals with one being one of two holiday offerings. Chicago Street Theatre's Artistic Chairman, Traci Brant says that the group is very proud to have created an ambitious season of newer shows and plays that audiences are unlikely to see anywhere else in Northwest Indiana. She added, "What our committee has come up with is a truly thrilling group of productions that will have something for everyone."

Although there are a few familiar titles within the season, Chicago Street has selected many plays that have a "whole new take" on audience favorites. August 21 through September 6, family audiences can delight at a new version of the fairy tale classic, Cinderella with the music of Mozart. In actuality, the composer is a character in the play which has been set in Germany when a young Wolfgang was trying to become a court composer. In this retelling he is the best friend of a certain charming prince. Mistaken identities and role reversal are part of this all-ages show directed by Jay T. Hanaway and Kelley Weisenbacher.

For the past four years, CST has made a huge "Hullabaloo" over its Halloween productions. This year they've selected a show so monstrous that it needs a second theatre company to help them bring a new musical version of the 1974 Mel Brooks comedy masterpiece Young Frankenstein to life. Joining Chicago Street in this musical experiment is the Ensemble Theatre Company and director Zachary Gipson. Performances run October 9 through November 1!

Following the 15 performances of Young Frankenstein, CST will start their holiday season with 15 performances of everyone's favorite first grader in Junie B. Jones The Musical November 20 through December 6! Based on the popular book series by Barbara Parks, audiences of all ages will love this brand new musical featuring four of Junie B.'s adventures set to a clever and delightful score. Two years ago Junie B. Jones in Jingle Bells, Batman Smells was the fastest selling holiday show in CST history and directors Dona Henry and Kelly Hite are excited to bring back this sassy hero of young people everywhere!

As a companion to the family show, Chicago Street Theatre also has a hilarious play for the grown ups with Every Christmas Story Ever Told (And Then Some!). Following the popularity of past shows like Tuna Christmas and The Santaland Diaries, CST is presenting this madcap romp with three actors performing every holiday special, tradition and song they can think of! Performances of this irreverent comedy run December 11 through December 20.

To kick off the new year, the theatre is presenting the type of edgy material that has become a trademark in each season. January 29 through February 13 CST unleashes Martin McDonagh's The Lieutenant of Inishmore. From the author of past Chicago Street Theatre productions of The Pillow Man, The Beauty Queen of Leenane and The Cripple of Inishmaan comes the playwright's darkest comedy to date about a Irish Liberation Army enforcer's quest to avenge the death of his cat. Eric Brant and Daena Sisk direct this twisted and hysterically funny black comedy.

Chicago Street's Spring family play features an all new adventure with the most popular teen sleuth of all time March 5 through 13 in Nancy Drew: Girl Detective. Directed by Kari-Anne Innes it follows the familiar character in a campy new mystery complete with a theatre, a hidden cache of jewels and a mysterious ghost who's scaring everybody in River Heights! Audiences of all ages will be thoroughly entertained when their favorite detective of all time is on the case!

Orson's Shadow is a wildly imaginative show written by Austin Pendleton that deals with the theatre and two Hollywood giants that is based on actual events. The drama which runs April 8 through 23 takes place in 1960 at a time when Laurence Olivier and Orson Welles had long passed their greatest accomplishments. A West End theatre critic offers them hope to reclaim their former glory if the two team up to produce Ionesco's absurdist masterpiece- Rhinoceros. The story crackles with absurdity as these two geniuses attempt to collaborate with the additional drama of Olivier's wife Vivien Leigh and his mistress.

Chicago Street has always been a source for new works and this season they were selected as one of the seven companies in the nation to produce one of the winners of the American Association of Community Theatre's 2015 New Play Festival. May 20 through June 4 the theatre with playwright Nedra Pezold Roberts to produce Wash, Dry, Fold. The new drama centers around a pair of arguing sisters who have inherited a rundown laundromat from their mother as well as an uncle who is a Vietnam POW who is in and out of reality.

Wrapping pup the group's 61st season is the play that many believe is Shakespeare's final masterpiece- The Tempest. This classic will take the stage for its park performance on July 8 and 9 of 2016 and continue its run at the theatre July 15 through 23. The Tempest tells the story of a banished duke who becomes the ruler of a remote island and hatches a plot for revenge on his brother using his mastery of the island's magic. Chicago Street's Lisa Formosa-Parmigiano directs this supernatural tale of longing and forgiveness.

In addition to their 2015-2016 season, Chicago Street will also host a number of special events and concerts through the year. Events will include the return of MeTV's Svengoolie for its annual Halloween Party as well as numerous opening night parties and after hour events with the theatre's "Dining Partners." One new advantage to being a Viewer's Choice subscriber will be a CST Dining Partner card at participating downtown restaurants. Patrons should check CST's website for details and follow the theatre on Facebook for daily news on the company.