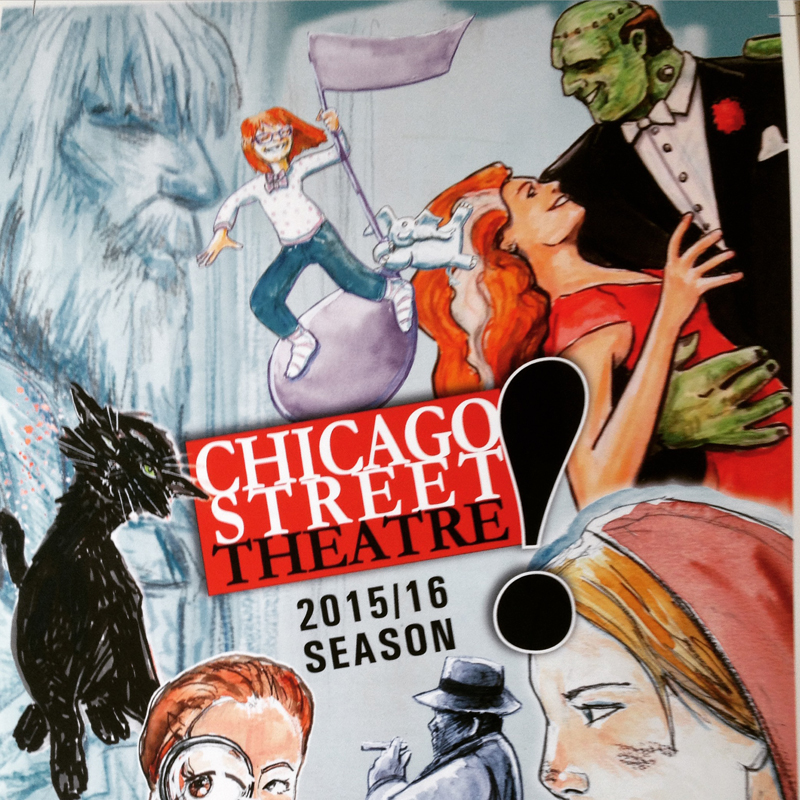 Audiences can sample scenes and excerpts from Chicago Street Theatre's upcoming plays and musicals at the 2015-2016 Season Preview Party being held on Sunday, August 30 at 6:30 PM. This Free Public Event has been a tradition at the theatre for the past eight years and is an opportunity for theatre-goers to experience the exciting line up of bold and original shows the theatre has to offer during its 61st Season. In addition to the stage show, it is also a chance to try out some of the food and spirits provided by the theatre's participating Dining Partners and to purchase Viewer's Choice packages for the group's new season.

The 2015-2016 Season at Chicago Street boast an impressive and ambitious selection of shows with two musical productions and holiday shows, along with an eclectic array of dramas, comedies, family productions, and cutting edge works that audiences aren't likely to see anywhere else in the region.

Currently onstage is the group's 37th Annual Fall Family Presentation. This year the group is performing the fairytale favorite, Cinderella with some exciting new twists. The play adapted by Charles Way and directed by Jay T. Hanaway and Kelley Weisenbacher features some mistaken identities and role reversal when the Prince ventures out in disguise and falls in love with a peasant girl. Meanwhile his father, a bedridden King conspires with his son's best friend, Wolfgang Amadeus Mozart to arrange a ball to lure a true princess. The show, which is running through September 6, is packed with fun and a wonderful way to introduce young audiences to the magic of theatre and music in this new retelling of a family classic.

For the past four years the group has offered a Halloween show in their October slot and this year's production is so monstrous that they've enlisted the help of The Ensemble Theatre Company to bring The New Mel Brooks Musical Young Frankenstein to life! While this is not the first time Chicago Street has co-produced a show with another company, it is an ambitious musical extravaganza from the Tony Award-winning team of The Producers that is fairly new to the volunteer theatre community. Based on Mel Brooks and Gene Wilder's beloved comedy masterpiece, performances run October 9 through November 1. In addition to the regular run, October 17th's performance will be the theatre's 4th Annual Halloween Party with Special Guest- MeTV's Svengoolie.

For the holidays, directors Dona Henry, Kelly Hite and Caroline Rau are working on two productions. For families and fans of the Barbara Parks book series the trio will direct Junie B. Jones The Musical. The adventures of everyone's favorite first grader set to an amusing and delightful score run November 20 through December 6. Following the run of the musical, CST is proud to present Every Christmas Story Ever Told (And Then Some!) for the grown-ups December 11 through 20. This comedy features three actors who set out to perform something from every holiday tradition, special, story and carol they can think of in a madcap comic romp.

In January and February the theatre will revisit the dark humor of Irish playwright Martin McDonagh with The Lieutenant of Inishmore. This edgy comedy from the writer and director of In Bruges and Seven Psychopaths, tells the story of an Irish Liberation Army enforcer who travels on a vicious mission to avenge the death of his cat. Performances run January 29 through February 13, 2016.

Starting March 4, families can enjoy the adventures of the world's most famous teenage super sleuth by seeing Nancy Drew: Girl Detective. In the play, Nancy must uncover a mystery revolving around an eerie estate, a hidden cache of jewels and a phantom that is terrorizing a small theater group. Audiences will love this campy tribute based on the best selling book series by Carolyn Keene and adapted by Marisha Chamberlin.

In April CST brings a play that looks at the lives of two theatrical and cinematic giants in Orson's Shadow by Austin Pendleton. By 1960, Laurence Olivier and Orson Welles' time in the spotlight had faded. Hope comes to them in the form of a startling proposal by West End Theatre Critic, Kenneth Tynan for the pair to team up and produce Ionesco's absurdist masterpiece Rhinoceros. Based on actual events, the play crackles with absurdity, wit, humor, and heartbreak as these larger than life talents fight to regain their former glory. Performances run April 8 through 23.

May 20 through June 4, CST will present Wash, Dry, Fold, a Winner in the 2015 American Association of Community Theatre's New Play Festival. Chicago Street Theatre is honored to be one of the seven producing companies in the nation to present a stunning new work of theatre. Traci Brant and Jonni Pera will direct Nedra Pezold Roberts' drama about a pair of sassy and bickering sisters who inherit their mother's run down laundromat and their veteran uncle who slips in and out of reality.

Closing out the groups 61st Season will be CST's 5th Annual Shakespeare in the Park production of The Tempest. Park performances of Shakespeare's late masterpiece will be held on July 8 and 9 with indoor performances running July 15 through 23. Stranded on a remote island, Duke Prospero and his daughter have been banished by his brother. When the former duke learns of the island's enchantment he uses it to summon a monstrous storm and bring his brother to the island and exact his revenge. Filled with magic and beauty, The Tempest is Shakespeare's timeless tale of forgiveness, generosity and enlightenment.

Space for the Season 61 Preview Party is limited so interested parties should reserve their place for this Free event by calling the CST Box Office at 219-464-1636 X1 or visiting the theatre's website at ChicagoStreet.org. Box Office hours are Noon to 4PM weekdays and two hours prior to show times during Cinderella.

This year Viewer's Choice subscription packages include a Dining Partner discount card for ten of the theatre's participating restaurants during the entire 2015-2016 Season.