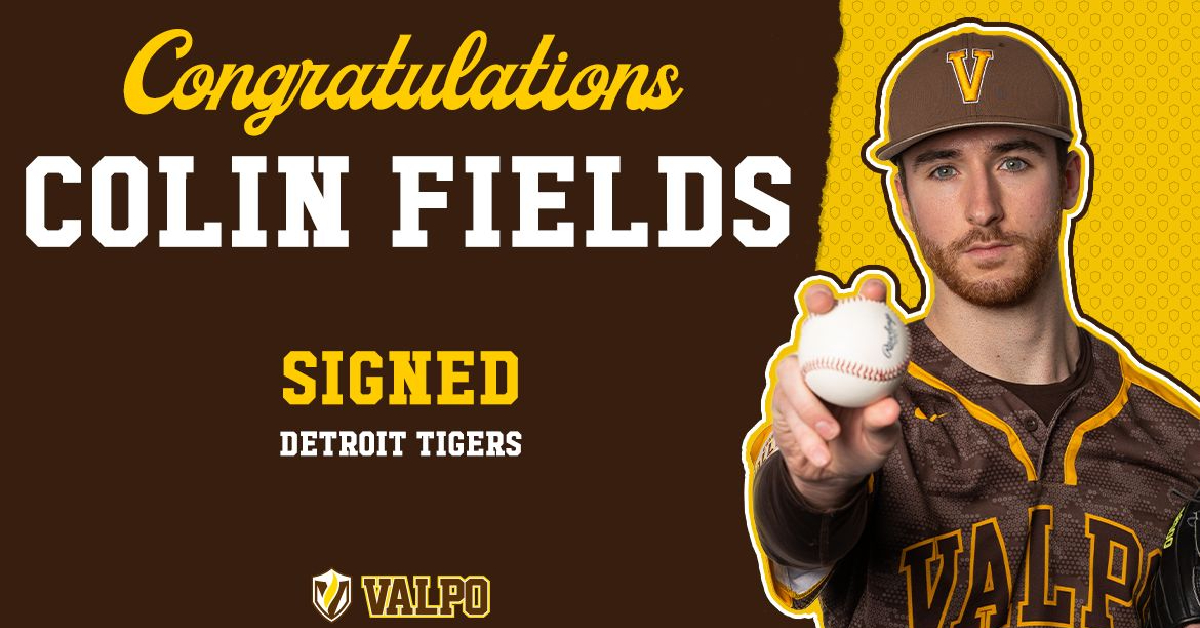 What started as a dream and evolved into a realistic goal became a reality on Tuesday afternoon for the now former Valparaiso University baseball right-handed pitcher who was the ace of head coach Brian Schmack’s pitching rotation this past season, closing out a four-year career with the Brown & Gold. Fields agreed to a free agent contract with the Detroit Tigers following the conclusion of the Major League Baseball Draft on Tuesday.

“It means a lot knowing that all of the hard work that everyone around me has put in to help me get to this point,” Fields said. “It’s very gratifying. I still have a lot to prove with this being a free agent deal. I’m ready to get going and prove myself.”

The MLB Draft was reduced from 40 rounds to 20 rounds within the last few years surrounding changes to the draft and minor league baseball that occurred during the COVID-19 pandemic, creating heightened competition for undrafted free agent opportunities.

“Nowadays the free agent market is just as competitive and as good of an accomplishment as getting drafted,” Schmack said. “This is something that he really wanted, and I’m very happy for him. He worked extremely hard to get to this spot. Colin was a little unsure of himself when he first joined our program, but this year he matured tenfold. He went out and did his job, and even when we didn’t score for him, he wouldn’t let that affect him. He showed signs of maturation that will play well for him as he moves on in his career.”

Fields achieved All-MVC Second Team recognition this season after leading the MVC in strikeouts with 110, a number that ranked 15th nationally. He led the conference and ranked second in the nation with 14.08 strikeouts per nine innings. Fields finished the season fifth in program history with 260 career strikeouts while also ranking fifth on the program’s single-season strikeout list. He had three games with double figure strikeout totals in 2022, including 13 at UIC, the most by a Valpo hurler in a single game since 2011.

“Valpo means the world to me,” Fields said. “I wouldn’t trade my experience at Valpo for going anywhere else. It’s home, and it’s become home over the past four years. I’ll always cherish my memories there, especially the friends that I’ve made along the way. I’ve made a lot of friends for life and connections that I’ll never let go.”

Fields’ tenure was highlighted by the eighth no-hitter in program history and first since 1992 on March 13, 2021 at Middle Tennessee. He achieved another rare baseball feat in that same game, turning in an immaculate inning (nine pitches, three strikeouts).

“During my time in college, I improved my knowledge of the game,” Fields said. “I’ve learned more about how my stuff moves and what my stuff does. That understanding is the biggest thing, along with getting bigger and stronger on top of that.”

Coincidentally, Fields will not be the only former member of Valpo’s program making his way to the Tigers’ spring training facility in Lakeland, Fla. this week. Left-handed pitcher Jake Miller was selected by the Tigers in the eighth round on Monday.

“It’s awesome; I love Jake to death,” Fields said. “He’s one of my best friends. To be able to continue a dream that we’ve both had for as long as we can remember is hard to put into words. Going to the same organization is unexpected, but I wouldn’t want to continue with anyone else. He’s going to push me and I’ll push him and that will lead to both of our success along the way.”