Three Indiana University Northwest students collected more than 242 boxes of feminine products to distribute to food banks in Northwest Indiana, knowing “periods don’t wait” and no woman should have to worry about it.

Melissa Rust of Lake Station, Bella Strilich of Valparaiso, and Danette Seamon of Crown Point were required to organize and campaign for a fundraiser to help improve the community as their final project in a Communication and Behavior class. With all three involved and interested in helping the homeless community in Northwest Indiana, Rust and her teammates decided to collect boxes of pads and tampons to donate to three food banks: First Baptist Church in Lake Station, Crown Point Community Care Cupboard, and Hilltop Pantry in Valparaiso.

“Homeless shelters and food banks receive donations, but if you’re poor and have trouble getting food, then how do you get other items like feminine products?” Rust asked, as the idea was forming amongst the teammates.

According to Rust, who is a Case Manager Intern at Gabriel’s Horn Homeless Shelter, people have access to food and clothes at these shelters, but items like pads and tampons are always overlooked. In fact, most shelters do not provide any feminine care products.

‘Why don’t shelters provide this?” the three girls asked. “What can we do?” 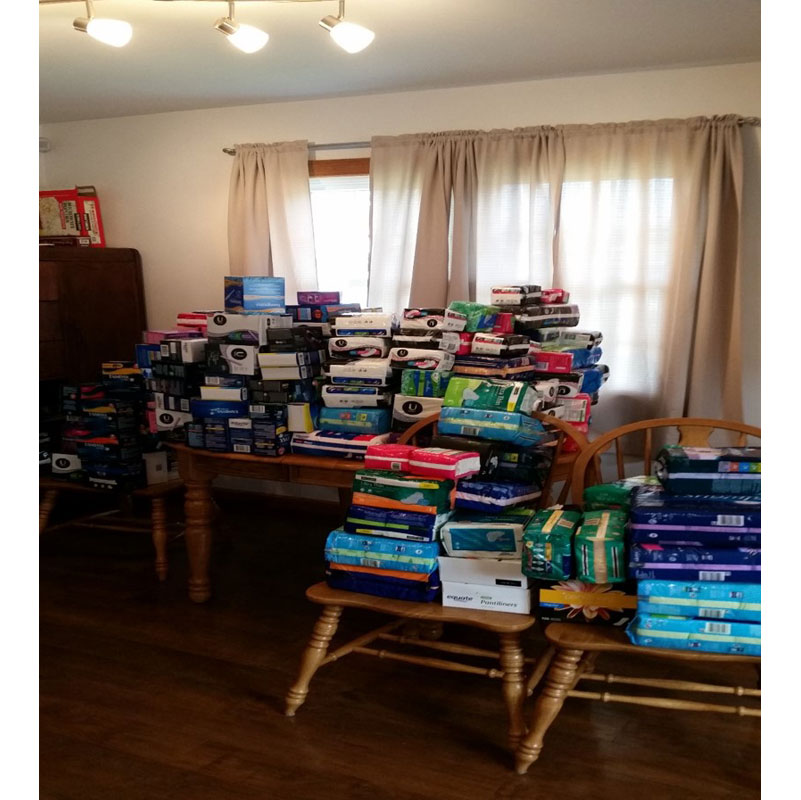 The team also looked at the women who may not be homeless but still cannot afford to spend money on their feminine hygiene needs.

They got to work, launching the “Periods Don’t Wait Campaign.” They first sent out a flyer to 141 companies throughout the Region, sharing their cause, goals and statistics that they found researching this not so well-known problem.

“We first tried to focus on women-based and owned businesses, since we thought they would be more willing to help,” Rust explained, but even male-owned businesses were happy to pitch in.

However, most men didn’t want to go out and buy these products, she said, and they asked if they could give just give money to Rust.

“I was uncomfortable with that,” she said. “I said, ‘No, I want the pads and tampons.’ So, instead Rust and the company compromised, and they reimbursed her for the products she bought after bringing in the receipt.

The goal was to collect 150 boxes, which could be distributed to the three food banks, so Rust and her teammates were pleasantly shocked when that number was surpassed so quickly.

“We got 242 boxes of pads and tampons, and many were the big boxes!” she said. “That was the shocking thing.” 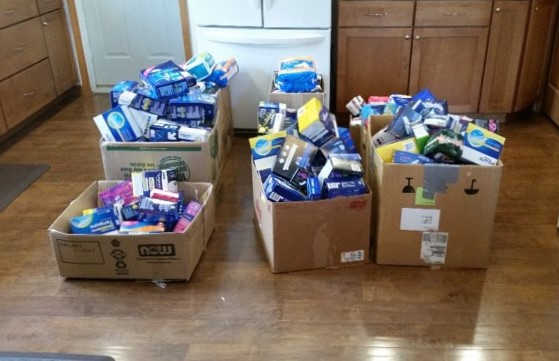 The campaign was picked up for an article in the Northwest Indiana Times and non-profit organizations, one of which was called Lotus Reach, which provides used clothes and items to the people in need in the community, helped spread the awareness even more. After one month, Rust picked up the donations, all of which could barely fit on the kitchen table in her apartment, and in April, boxes of products were brought to each shelter.

This campaign cause is not a new concept, Rust said, after researching the idea. There is the non-profit PERIOD, founded by Nadya Okamoto in New York, another fundraiser in Canada called Period Purses, and another called The Homeless Period Project. The hashtag, #HappyPeriod is a nation-wide social movement started in 2015 by Chelsea VonChaz and her mother Cherryl Warner.

Though this was just a school project, Rust and her teammates went above and beyond, sparking something greater than the desire of a good grade.

“I took it beyond what the requirements required. I enjoyed this and I take things like this very seriously,” she said.

When Rust graduates she will be moving to Florida for social work, and she will be able to look back on this project and show people what she did in just a week-long school project.

And looking back now, Rust still cannot believe the generosity she felt from people throughout the community.

“I was driving all over Northwest Indiana picking up stuff,” she said. “I truly didn’t expect the Region to get involved as it did. When we talked to the companies donating, they knew that we were donating to these three cities and even if they were not in one of those cities, they knew it was still people in Northwest Indiana being affected, and they jumped on board.”