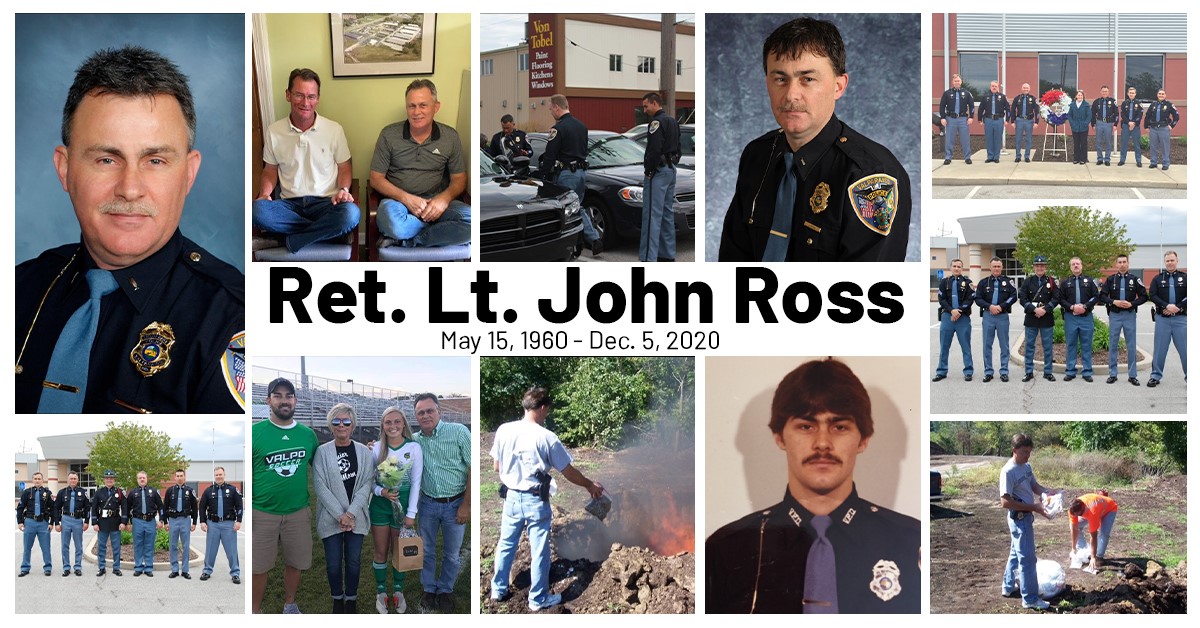 Community members and friends of Retired Police Lieutenant John Ross gathered to pay their respects and remember the legacy that Ross left in the City of Valparaiso.

John Ross was known as a great man who got up every day and did the right thing. He spent 32 years of his life serving the Valparaiso Police Department and the citizens of Valparaiso.

"John Ross was a wonderful, humble human," local entrepreneur Mark Forszt said. "He touched the lives of all he met. Everyone that knew John is very fortunate. He was like a younger brother to myself and my brother Michael. We were lucky to have John join us at MJF for the past five years. He is irreplaceable and in my thoughts daily."

Ross started working for the Valparaiso Police Department in 1981 and left to work as a patrolman in Chandler, Arizona from 1982 to 1989. He returned to Valparaiso in 1990 and worked his way through the patrol division, earning the ranks of sergeant and lieutenant. Ross went on to serve as the Assistant Chief of Administration under Chief Walt Lamberson from 2001 to 2004.

“John was a hardworking, dedicated public servant, who spent 30 years of his life serving the department and citizens of Valparaiso,” Balon said. “Throughout his career, John touched the lives of those he worked with as well as the citizens he helped simply by being himself.”

“John was truly one of a kind,” Perez said. “He was my all-time favorite boss. I will forever cherish the times he drove me around the City of Valparaiso as he engaged in interactions with what felt like every single resident. I think he was liked by so many because of his heart. He really cared about the people in his life.”

Pieces of John’s presence will forever remain in the hearts of many in Valparaiso. Perez shared how he knows for certain that Ross and his spirit lives on through all of his co-workers at the Valparaiso Police Department.

Ross spent the rest of his career as a detective investigating major criminal cases, including serving as a detective lieutenant beginning in 2005. In 2015, after 32 years with the Valparaiso Police Department, Ross retired. Ross had a long and distinguished career that impacted many individuals around him.

Dana Kinne, detective bureau secretary for the Valparaiso Police Department, appreciated the guidance from John as he closed in on retirement.

“I joined the Valparaiso Police Department Investigations Division in 2015, only a few months before John retired,” Kinne said. “However, in those few months, I observed John; I listened and learned from him. As a member of my first ‘crew,’ John will always hold a special place in my heart, and my memories of him will always make me smile. Godspeed, J.R.”

John was a dedicated husband and father who glowed with pride and happiness when talking about his wife, Lana, his son, Cody, and his daughter, Rachel. When it came to his wife and children, there was absolutely nothing he would not do, and we are sending every ounce of support to his family during this great loss.

“My heart goes out to John’s wife and family,” Porter County Sheriff Dave Reynolds said. “Words can never adequately describe the loss we, in law enforcement, and the community are feeling. John was a consummate police officer and was respected by anyone who ever was fortunate enough to work with and be around him. He will be missed.”

People from all over the community expressed their love for Ross with showers of compliments and heartfelt sentiments.

Dr. Thomas Cavanaugh: “My best time of the day was sipping early-morning coffee with John at his office. Lots of laughs and smiles.”

Chris Mahlmann: “John Ross served his city of Valpo for 32 years as a police officer. He served his family as a father and husband. He was one of the most honest, loyal, hardworking, and decent human beings I have met.”

Jeff Haggerty: “I, like everyone else, am still in shock. John was so much to so many. He loved his family, his friends, and his community unconditionally. He was one-of-a-kind and he will forever be missed. Godspeed, John Ross.”

Harley Snyder: “John Ross was a hardworking, patriotic American who loved his wife and family more than life itself.”

Jenny Craig-Brown: “John was my bright light in the early mornings. As he was checking on things each morning, he would stop at the gym to say hi if he saw me. He always answered my calls with, ‘Oh no. What do you want, trouble?’ I'll never forget that. He made many of my early mornings or tough days better, and I'm thankful to have known him.”

John Steffen: “He was a great friend and co-worker. He will be forever missed. Godspeed, John Ross.”

Frank Marshall: “John was just a great guy. He was easy to talk to, mild-mannered, smart, hardworking, and always had at least two jobs. He loved his family and talked about them every time I ran into him. He cared deeply about the state of the nation and our awesome little city.”

Jim Minard: “John was always a pleasure to be around. I will miss Saturday coffee with him.”

Ed Charbonneau: "I was blessed to have been able to spend time with John. Never flustered, he was always a calming influence no matter what the circumstances. John was truly a gentle man."

Thank you, John Ross, for impacting so many lives in such positive ways.

If you have positive memories or photos to share about John for others to celebrate, please post them here or send us an email at share@greatnews.life.