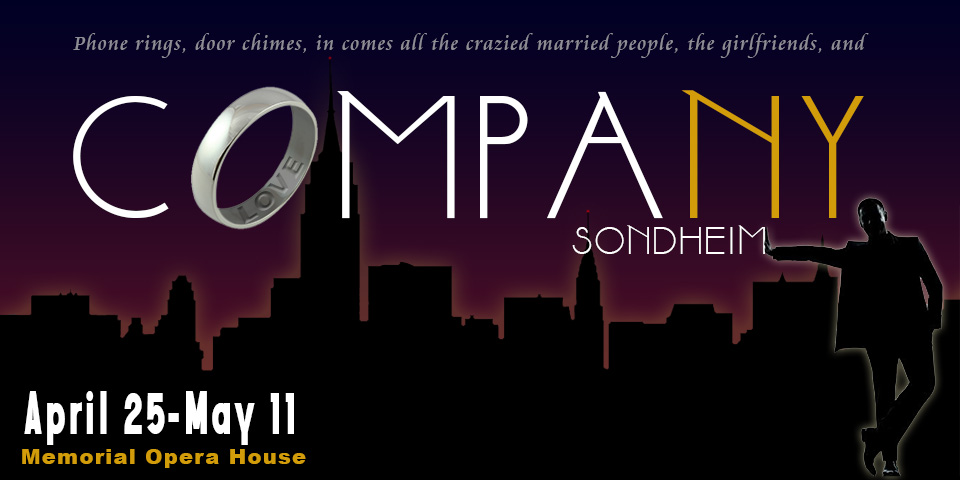 Peer pressure to walk down the aisle and take the plunge is exerted on Robert – the lead character of "Company" – by his once single pals who one by one tied the knot leaving Robert as the lone bachelor of the bunch.

"Company" is based on a book by George Furth set to music by Stephen Sondheim, who inserts many songs into the story of Robert's trepidation of marriage and walking down the aisle. Sondheim wrote the music and lyrics to such beloved tunes as "Company," "Another Hundred People," "Getting Married Today," "Being Alive" and "The Ladies Who Lunch."

It seems everyone but Robert is married or getting married, and they are all eager for their bachelor friend to follow in their footsteps, but Robert isn't quite ready to take the plunge. He's sure that "Someone Is Waiting", the perfect girl just for him, and until she makes herself known, he is content to amuse himself with the countless women who come to New York every day. Meanwhile, Robert has the opportunity to observe the lives of all of his married friends, and what he sees does not exactly fill him with encouragement. It's enough to make Robert question whether he ever wants to join the ranks of the married. In the end, however, in spite of all his friends' failings, he comes to the conclusion that there is no point in "Being Alive" unless one has someone to share it with.

The Memorial Opera House's presentation of "Company" is the second production of the 2014 theater season at Memorial Opera House (104 East Indiana Avenue) in downtown Valparaiso, built in 1893 to honor the soldiers and sailors who served in the Civil War.

"We have made it our goal to present quality entertainment at a reasonable price," reminds Memorial Opera House Business Director, Michelle Smith. "Our mission is to spotlight history, community, and the arts by preserving a National Historic Monument dedicated to increasing opportunities for all people to appreciate, participate in and enjoy the arts."

The historic Memorial Opera House in downtown Valparaiso at 104 East Indiana Avenue has stood as a beacon for the Arts for 120 years and is a regional treasure. View photos, a video and learn more by visiting our website: www.memorialoperahouse.com.