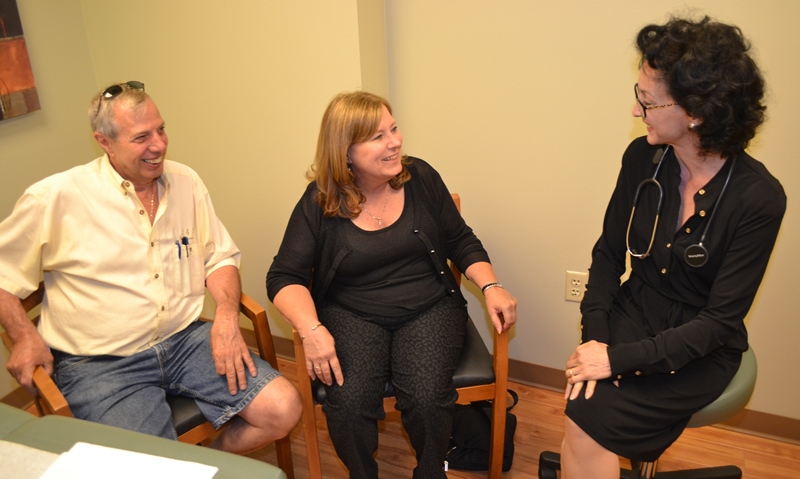 Janis Kazmucha of Michigan City needed a rare, complex surgical procedure to treat a kidney aneurysm that could have proved fatal had it burst.

Fortunately, the remedy was found close to home, through the efforts of Virginia Newman, MD, a vascular surgeon, and the staff at Franciscan St. Anthony Health-Michigan City.

Dr. Newman was the first physician in Indiana to perform the ex-vivo renal artery branch reconstruction (a type of autotransplantation) procedure several years ago at another Indiana hospital. These days, she is the only surgeon who performs it in Northwest Indiana.

“Many people think such complex vascular procedures only can be done at large university centers, but it is important they know these services are available right here in Michigan City,” she said.

Dr. Newman, who has been in practice since 1995 and with Franciscan Alliance since 2010, said the problem was discovered incidentally in May during a CT scan and subsequent angiogram after Kazmucha complained of flank pain (pain in the side or back). The results showed the problem was with the kidney on her right side.

“She had a large aneurysm involving the small branches of the right kidney artery. This could not be treated with stents or balloons because of the small size of the vessels. The only option was open surgery. If untreated, the aneurysm can rupture, causing loss of the kidneys and possibly her life,” Dr. Newman said.

The procedure, done in June, involved reconstructing all the vessels, after the aneurysm was removed.

The kidney only can be without blood for 30 minutes, or it will die. To remove the aneurysm and reconstruct the small blood vessels takes more than that amount of time, so the kidney was removed from the body and cooled to a certain temperature, then flushed with a cool potassium solution to stop the cells’ metabolism, Dr. Newman said.

The branches then were reconstructed by sewing together vein segments obtained from the leg. After each vessel was reconstructed, the kidney was flushed again to keep it cool.

“After the branches are reconstructed, with lots of little pieces of leg vein sewn together, the kidney is placed back in the body, reconnected to the main aorta and veins, warmed up, and we have a happy kidney again,” Dr. Newman said, adding the procedure took about 6.5 hours.

Kazmucha said she couldn’t be happier with the results and with the treatment she received from Newman and the hospital staff. She was released five days after surgery, with no complications.

“Dr. Newman was wonderful; I liked her right off the bat and was very confident in her. She explained everything to a tee and was on top of things around the clock,” Kazmucha said.

Added Dr. Newman, “I am privileged and honored that she put her trust in us and I am proud that my hospital has the resources and expertise to handle very complex cases. We have a lot to offer and our community may benefit from that knowledge.”