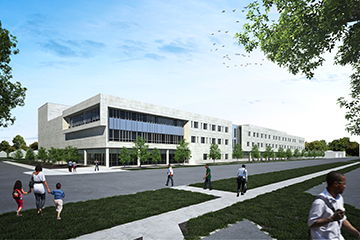 Plans are moving forward as scheduled for the new Arts & Sciences building to be constructed at the corner of Broadway and 35th Street beginning in the latter part of 2015.

Indiana University received approval in July 2013 by the Indiana State Budget Committee to build a three-story, 133,500-square-foot building to be shared with Ivy Tech Community College on the IU Northwest campus. Half of the $45 million building will house IU Northwest’s fine and performing arts programs, as well as academic and administration space for the College of Arts and Sciences. Thirty percent of the building will be occupied by Ivy Tech science programs and a “one-stop shop” for enrollment and admission services. The remainder of the building will include classrooms and informal study spaces to be shared by both campuses.

The building plans, initially approved by the IU Board of Trustees last year, have been further refined, with construction documents drawn up over the past year. The “Notice to Bidders” for construction of the building has been issued and can be found at the top of the IU Northwest’s Office of Administration’s website, at www.iun.edu/administration. Additional information about building projects throughout Indiana University is available at the Vice President for Capital Planning and Facilities’ website, at http://www.iu.edu/~vpcpf/consultant-contractor/bidding.shtml.

Submitted bids will be opened on Thursday, June 11, with a public meeting at 2 p.m. in the John W. Anderson Library Conference Center, Room 105ABC. The IU Architect’s Office has been working with architecture firm Moody Nolan to draw up the documents.

The project will be celebrated and construction officially kicked off at 5:30 p.m., Thursday, June 18, with an invitation-only groundbreaking ceremony in the Savannah Center lobby. The IU Board of Trustees will be visiting campus and taking part in the ceremony. They will see their approval of the building last summer begin to take shape with the first physical changes expected soon after the bid is awarded and before fall classes begin. 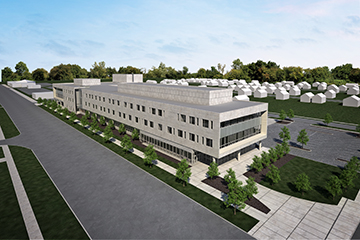 Much anticipation surrounds the replacement of IU Northwest’s signature performance venue, lost when Tamarack Hall, IU Northwest’s first building, was destroyed by floodwaters in 2008 and demolished in 2012. Plans call for a new 500-seat auditorium as well as a smaller “black box” theatre.

“The return of a large-scale auditorium will not only benefit IU Northwest, but the entire community as it will bring the arts front and center to the Gary community, serving as an anchor for the city’s redevelopment plan,” said Associate Dean for the College of Arts and Sciences David Klamen.

Officials say the presence of Ivy Tech, while also a responsible cost-savings move for both campuses, will contribute to strengthening the pathway of Ivy Tech students to completing their four-year degrees at IU Northwest. The building’s construction also serves as a cornerstone for the redevelopment goals of the City of Gary through its University Park Plan, which aims to focus on investment along Broadway and on 35th Avenue.

“The Arts & Sciences Building will be a signature addition to our campus and the University Park neighborhood that will feature state-of-the-art teaching, learning, studio, and laboratory and performance spaces for the IU Northwest and Ivy Tech students who will occupy the building at different stages in their academic careers,” said IU Northwest Chancellor William J. Lowe. “The central location of the Arts and Sciences building will be instrumental in strengthening the relationship between our campuses, our students and our faculties.”