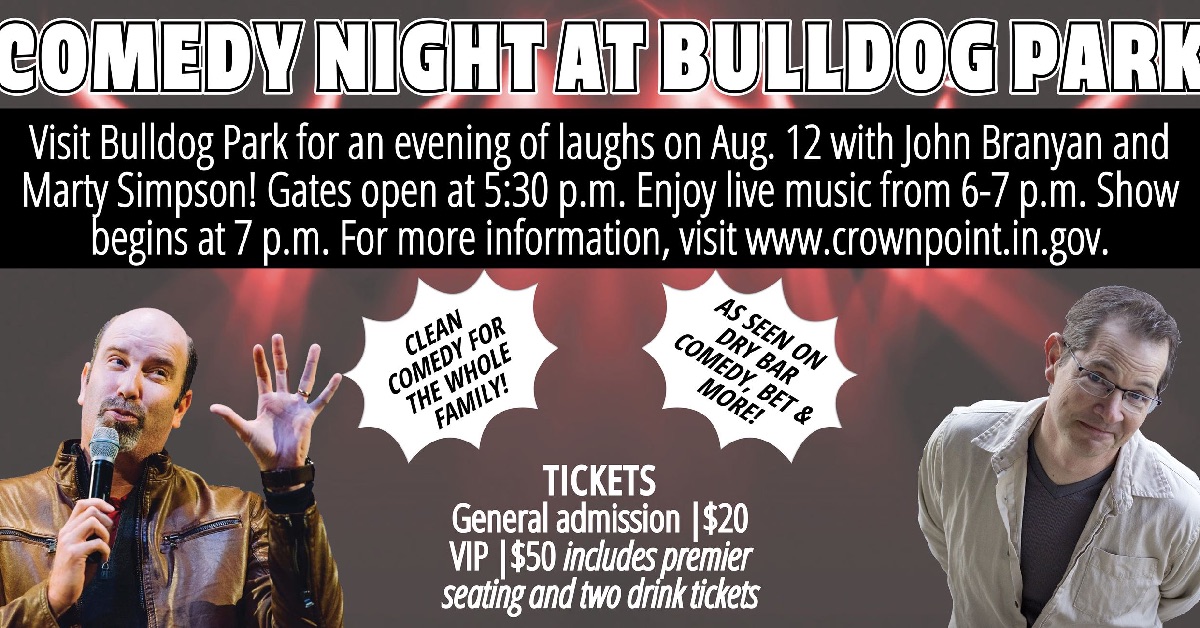 Get ready for a night of laughs as the City of Crown Point hosts two nationally renowned comics at Bulldog Park.

John Branyan and Marty Simpson will take the stage at Bulldog Park for an evening of clean, family friendly comedy in our premier entertainment venue located steps away from the historic downtown square.

“Having two comedians like John and Marty perform at Bulldog Park enhances our facility’s identity as an entertainment destination in the Region,” Mayor Pete Land said. “Our state-of-the-art facility is the perfect
location for an event like this, and I hope the community is ready for a night to remember.”

John Branyan, as seen on Dry Bar Comedy, will headline the evening, beginning at 7 p.m. John is featured on nine recorded comedy projects with people like Ken Davis, David Jeremiah, Ted Cunningham and Tim
Hawkins. When John stepped onto a tiny stage in the early 1990’s, he thought his interest in comedy was just a phase — he thought he would get the whole thing out of his system. But, more than 25 years later,
he still loves making people laugh with his style of speaking that won’t leave a filthy residue.

As seen on Dry Bar Comedy, BET, ESPN and more, Marty Simpson will close out the night beginning around 8 p.m. Marty has performed on three continents and in 46 of the 50 United States. Marty was a finalist in the critically acclaimed television series, "Trial By Laughter," and was named a festival favorite at Big Pine Comedy Festival. His comedy is shaped not only by his 25-plus years of marriage and two kids, but also his 10 years as a head high school football coach and drama teacher.

Tickets are available online at Eventbrite and will be available at the door. General admission is $20. VIP is $50 and includes premier seating and two drink tickets.

For more information, call the PACE (Parks, Athletics, Communications and Entertainment) Department at
219-661-2271, or visit www.crownpoint.in.gov.