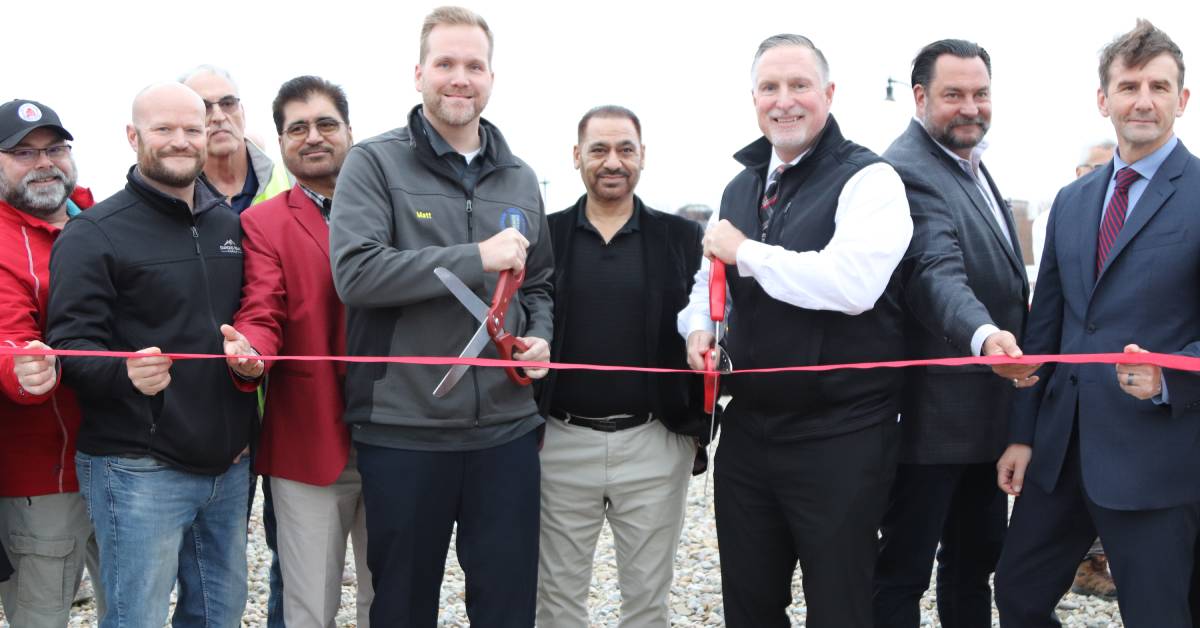 Over the past six years, the City of Crown Point has committed to improving 109th Avenue through the 109th Avenue Transportation & Safety Improvement Project, which has included small projects like lighting installations and big projects like the construction of the West Dog Bone I-65 Interchange.

At 3 p.m. on Wednesday, December 15, The City of Crown Point, policemen, firemen, and many of the individuals who worked on the West Dog Bone I-65 Interchange, gathered for the interchange’s official ribbon-cutting ceremony.

To bring to light this vision of a safe interchange for Crown Point residents and visitors alike, the City of Crown Point collaborated with a variety of partners.

“The design of this entire project here we had met many different legs here from the federal side, the state side, and the local dollars here,” said Crown Point Mayor David Uran. “It took several different engineering firms to work together and coordinate plans and documents to make sure this corridor looks together and seamless and to make sure that we're hitting our timelines.”

Hitting this timeline is a feat that makes Uran and other partners of this project proud. Uran applauded many of the project partners for their dedication and diligence throughout the construction process that ensured the West Dog Bone I-65 Interchange was completed on time.

“We didn't want to keep piecemealing this whole corridor here, shutting things down here and there and doing different things that would really disrupt traffic flow, as much as we wanted this faster. This was thought the fastest you can do a road project in any stretch of the imagination,” Uran said.

INDOT District Deputy Commissioner Matt Deitchley knew that opening the interchange quickly needed to be one of INDOT’s priorities as it is crucial to the residents of Crown Point.

“To the city of Crown Point. It's their downtown thoroughfare, so I'm always really aware in my position that while we have a lot of state roads, those are the same roads that run through the heart and the downtowns of the cities and towns crossing Indiana,” Deitchley said. “That's why the partnership with us is so great, with Crown Point and INDOT, and we want to keep that going. This is a big part of that.”

While INDOT did prioritize speed, they did not sacrifice quality to achieve that end as increasing safety was one of the hallmarks of this construction project.

“The whole goal of a dog bone interchange is to reduce injury, accidents, and to increase mobility, and obviously, we all know that that's exactly what is needed here, so that's exactly what's going to happen. Here down in Crown Point we’ve linked arms in support of a roundabout corridor,” Deitchley said.

Congressman Frank Mrvan noted that the West Dog Bone I-65 Interchange had many positive implications, including the collaboration of partners of various sizes and the development of Crown Point and Indiana as a whole.

“I want to emphasize that this is a federal, state, and local initiative; a collaborative effort, people coming together, tearing down silos in order to accomplish something in a timely manner,” Mrvan. “So, with that, I just want to thank everyone who participated. I look forward to seeing the development come to all the city workers who are here every single day making this happen. I appreciate your efforts. To Mayor Uran, thank you for being someone who has the vision of the future for development and infrastructure here in our city and in the state of Indiana. I thank you all very much and congratulations. May all the traffic come.”

With the West Dog Bone I-65 Interchange completed, the 109th Avenue Transportation & Safety Improvement Project is coming to a close, totaling close to $20 million.

To learn more about improvements to the City of Crown Point, visit its website at https://www.crownpoint.in.gov/.