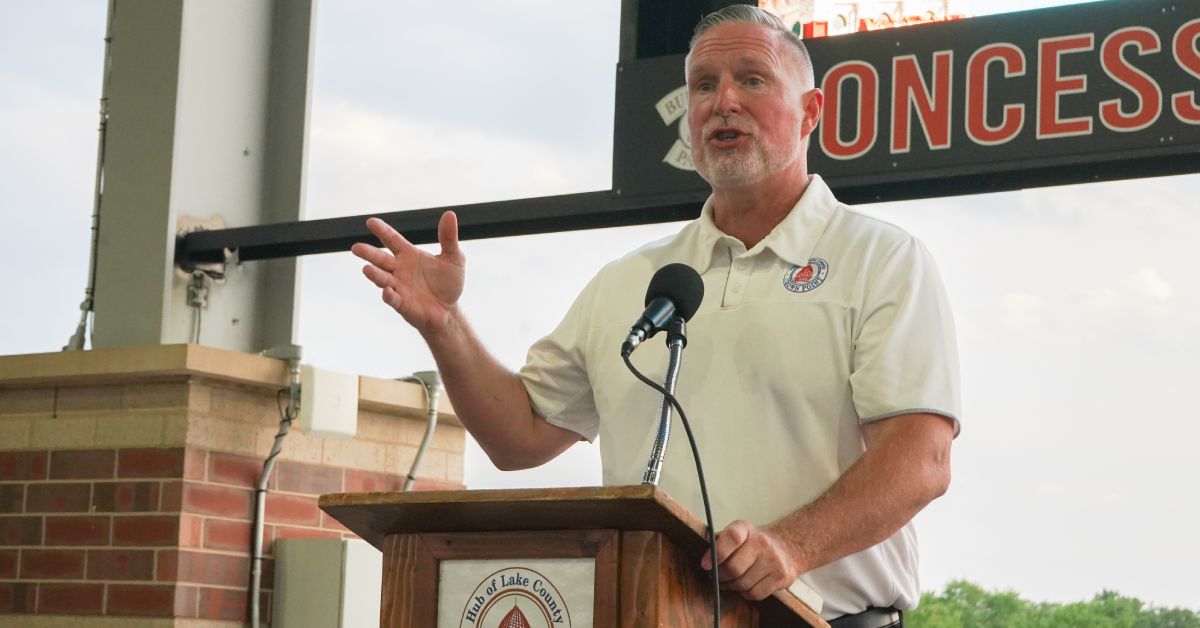 On Tuesday, May 31, Mayor David Uran delivered his final State of the City Address before finishing his 14-year career as the City of Crown Point’s mayor.

Under Uran’s leadership, the city has seen major improvements in every aspect of its infrastructure. From human resources to first responders, Uran has built an impressive staff while increasing productivity in each department. Statistically, Crown Point has never been in better shape.

Uran’s decision to step into a new role was announced in early May 2022. His last day in office will be June 2. He will be stepping into a new position at the South Shore CVA as its President and CEO.

The news of Uran’s departure was bittersweet for many. Although Uran will no longer be the driving force behind Crown Point’s continual improvement, his position with the CVA means that he will be able to expand his reach to benefit the entire Region, including the City of Crown Point.

“His accomplishments here will definitely roll over into his new job. They'll use those skills and everything that he’s learned from here and put it to use at this new endeavor. I just wish him nothing but the best. It's been great working with him for so many years,” said Utilities Administrative Assistant Bre Falcone.

Employees of the city were especially impacted by Uran’s decision. No matter what department they worked in, city employees have always appreciated Uran’s efficiency, effectiveness, and empathy.

“He’s done so many different things,” said Parks Superintendant Jennie Burgess. “It kept things, especially in my department, exciting. He's made changes and developed different opportunities for the community as a whole. There were always big projects and the next big thing and he just kept tackling bigger and new projects that were always exciting as it was always something else to do. We're super sad to see him go but at the same time, it's such a great opportunity for him.”

Though sad to see him leave, friends and colleagues of Uran are looking forward to seeing his successes in the future.

Clerk-Treasurer Dave Benson has worked with Uran since Flag Day in 1990 when they both began their careers as police officers. Throughout their professional careers, Uran and Benson have both grown into different roles within the city, and despite Uran’s change in profession, Benson is excited to watch Uran grow into his new role with the CVA.

“I am sad to see him leave the city, but I'm excited for the South Shore because what he did for us he’s going to do at a bigger scale, and he's good at what he does. He's a very competitive person and everybody benefits from this competitiveness,” said Benson.

Benson shared a heartfelt thank-you to Uran during his portion of the State of the City Address.

“Thank you for everything you've done for me along the way and I wish you the best. This man is going to do wonderful things for the South Shore and for our city. Best of luck to you,” said Benson.

Uran then discussed the economic and physical advancements made to the City of Crown Point in 2021. Each department was separately discussed, and leaders of the departments were individually thanked. In every department, Crown Point has shown significant growth and improvement.

Uran concluded his address by thanking a myriad of people that have been by his side throughout his time as mayor. From old friends to current colleagues, Uran had something to say about everyone. He gave a special thanks to former Mayor James Metros for believing in Uran and encouraging him to run for office 14 years ago.

“I certainly wouldn’t be standing up here tonight if it wasn't for the former Mayor James Metros for picking up the phone and calling me in early 2007 and asking me ‘do you want to become mayor?’ He had the faith in me and reached out to me, so I want to thank him for what he did to transform the legacy that we picked up at the time and ran with,” said Uran.

After Uran’s address, his family was invited to the stage as staff members surprised Uran with a video, plaque, and coaching uniform. The plaque, made in the shape of Indiana, featured photos from different points of Uran’s career. The words “Team Uran” stretched across the plaque. No matter where Uran goes in his career, it’s clear that the citizens of Crown Point will always be “Team Uran.”

In his closing remarks, Uran issued a final thank you to every member of the community and urged them to keep pushing toward growth and prosperity for the city and the Region.

“Thank you for being part of a great community. Keep that tradition going,” said Uran. To keep up with the changes within the City of Crown Point, visit https://www.crownpoint.in.gov/.