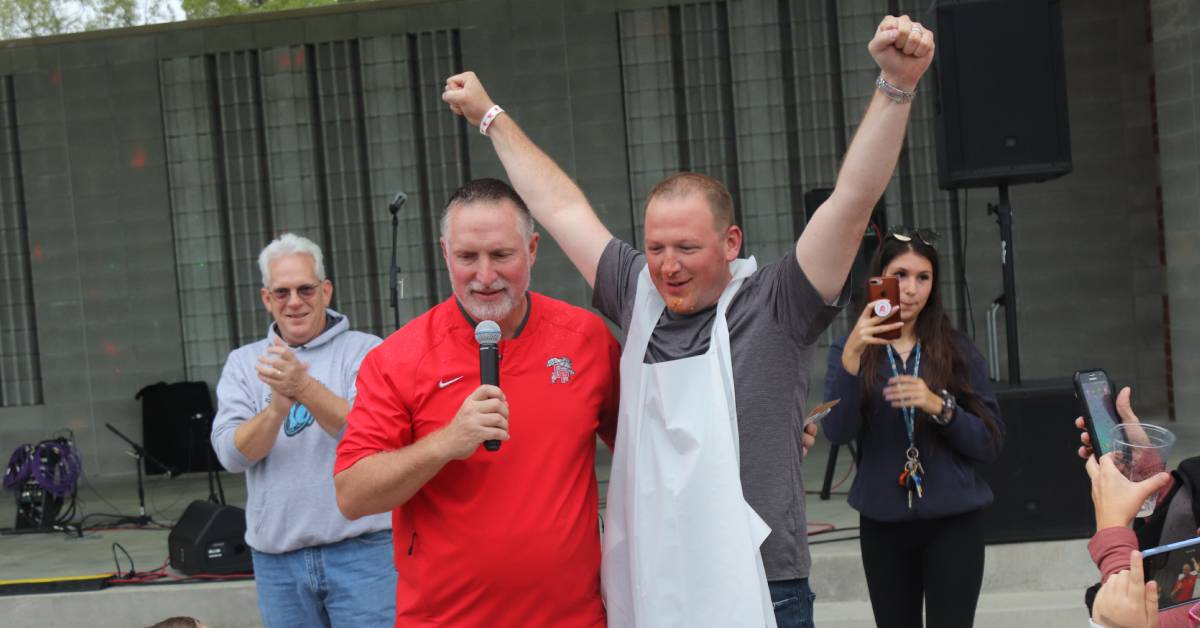 Crown Point came together on Saturday for one last outdoor bash for the year at the city’s 12th Annual Oktoberfest. Hosted at Bulldog Park, the party featured brews and food from local favorites such as Crown Brewing and Carriage Court Pizza, as well as live performances by the Uptown Dance Band and the Ladies of Motown.

Bulldog Park has bustled with festivities ever since it opened earlier this year, playing host to all of the city’s parties such as the Annual Corn Roast or the Family Picnic. This time around, Crown Point Special Events organized classic fall activities such as a pie-eating contest and all-day hayrides.

“We wanted to have something like an end-of-the-season hurrah for all of our outdoor activities,” said David Uran, Crown Point Mayor. “October’s weather can be very unpredictable, it was kind of nice early on but now we’re getting rain showers. With our new covered pavilion here, people can still come out downtown to enjoy these outdoor festivities and our food selections.”

The mayor emceed the applesauce eating competition for the kids, as well as the pie-eating contest. The top three finishers earned gift cards to restaurants in and around the Crown Point Square such as Tavern on Main and Station 21. Andy Martin dominated his competition, proudly hoisting his pie sheet over his head before claiming his reward.

“It feels amazing that I beat all these great competitors,” he said. “I love when the city puts on events like this for the community. I think they do a great job, and I’m really happy with everything they do. Let’s try for French Silk next time!”

According to Uran, events like Oktoberfest demonstrate what Crown Point is all about

“I truly believe these contests down here, where the families come together, kids and adults, is really part of the hometown feel,” he said. “I want to thank our sponsors, participating vendors, and our staff from the Parks Department and Special Events for coordinating this. It’s a team effort, and it’s another reason why Crown Point’s been voted the number one place to live, work, and play. You see that firsthand right here.”

Oktoberfest also gave a chance for local nonprofits, such as Crown Point Volunteer Fire Department Inc., to visit with the community. They sold t-shirts and raffle tickets to raise money for equipment like fire gear and other tools that they use every day.

“I think it’s awesome, it brings the whole city out to have a good time,” said Mark Reed, a firefighter and paramedic. “Bulldog Park is probably one of the greatest things to happen to the city in a long time, and for us, it’s nice to get out here and talk with community members and show them what we do over at the fire department.”

Keep up with what’s happening in Crown Point by checking out their Facebook page: facebook.com/CPSpecialEvents/.