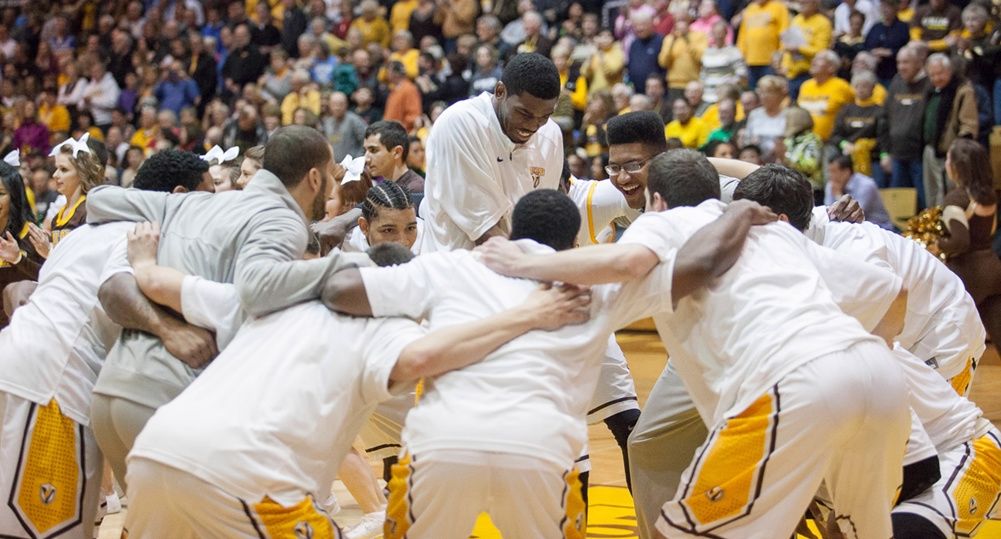 The Valparaiso University men’s basketball team will raise its championship banners from the 2014-15 campaign as it opens the 2015-16 schedule – a slate which features 11 games against postseason teams from a season ago – on Friday night, Nov. 13 at the ARC.

The Crusaders will face Indianapolis in exhibition action on Tuesday evening, Nov. 3 in their lone exhibition game before welcoming IPFW to the ARC on the opening Friday night of the season. Two days later, Valpo will play the first of four games as part of the Beaver Showcase as it hosts an Iona squad which won 26 games last year and earned a berth into the Postseason NIT.

The Crusaders will then fly east to face Rhode Island, which advanced to the second round of the NIT last year and won 23 games, on Tuesday morning, Nov. 17 at 9 a.m. CT as part of ESPN’s College Hoops Tip-Off Marathon. Valpo’s own early-season marathon continues the next two days, as the Crusaders return home to host IU Kokomo on the 18th and Trinity Christian on the 19th - both games falling under the umbrella of the Beaver Showcase.

Valpo then takes a swing through the Pacific Northwest, taking on a pair of Pac-12 opponents in Oregon – a squad which won 26 games and advanced to the Third Round of the NCAA Tournament last season – on Sunday, Nov. 22 and Oregon State – Valpo’s fourth and final game as part of the Beaver Showcase – on Tuesday, Nov. 24. The Crusaders conclude the stretch of three consecutive road games in-state on Nov. 28, traveling to face Ball State.

The Crusaders return home on Thursday, Dec. 3 for the front half of an in-season home-and-home series with Belmont, which earned the OVC Tournament title and a berth in the NCAA Tournament as part of a 22-win campaign last year. Valpo hits the road again to play at Indiana State (Dec. 9) and Chicago State (Dec. 11) before concluding the home non-league schedule against Missouri State on Saturday afternoon, Dec. 19. A game at Belmont on Dec. 28 closes out the non-league slate for Valpo.

The previously-announced Horizon League schedule opens up at the ARC on Saturday afternoon, Jan. 2 versus UIC. The league double round-robin slate features at least five games broadcast on the ESPN family of networks, and closes out on Feb. 28 at Green Bay. The Horizon League Championship will be held Mar. 5-8 in Detroit, Mich. at Joe Louis Arena, with the league champion earning the league’s automatic berth into the NCAA Tournament.

Valparaiso enters the 2015-16 campaign as one of the nation’s most experienced teams. The Crusaders, who won a school-record 28 games last season in capturing the Horizon League regular season and tournament titles and returning to the NCAA Tournament, bring back all five starters and 10 letterwinners in all from last year’s squad, a group which comprised 98.8% of the 2014-15 team’s scoring and rebounding.