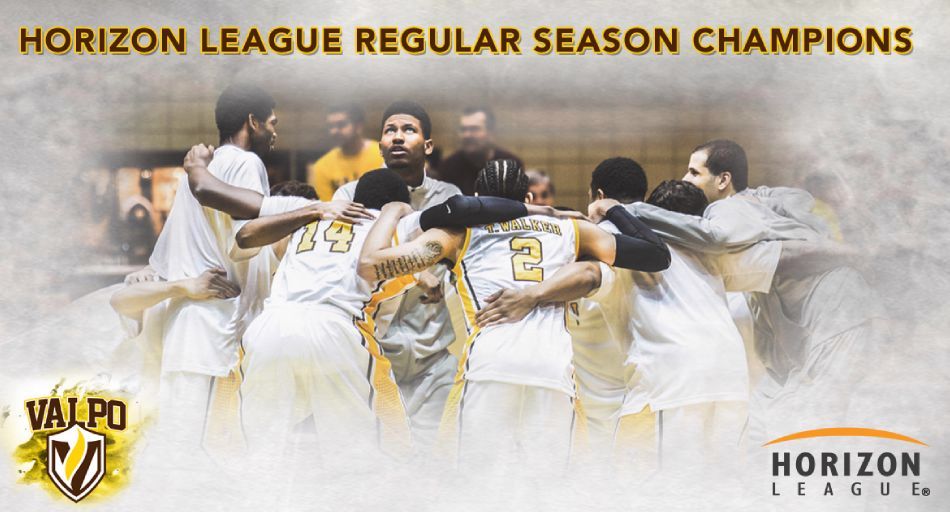 Three outright Horizon League regular season championships in four years. The Valparaiso men’s basketball team made sure they would share the title banner with no other team on Friday night, winning at Cleveland State 56-53 in front of a national television audience to finish atop the league with a 13-3 record.

The Crusaders claimed the lead for good late in the first half on a 3-pointer by junior Keith Carter (Maywood, Ill./Proviso East [Saint Louis]), extending it to as many as 14 points in the second half. Cleveland State would close to within four points on back-to-back 3-pointers with 1:35 to play, but the biggest play of the year belonged to sophomore Alec Peters (Washington, Ill./Washington), who took a feed from Carter in the corner and drilled a 3-pointer while being fouled with 1:11 to go. Peters would complete the four-point play, and the Vikings got no closer than five points until the final horn.

Friday’s win secured first place by one game over either Oakland or Green Bay, which square off Saturday afternoon in their regular season finale. The 13-3 mark in league play matched the Crusaders’ record in the 2012-13 Horizon League campaign. In addition, going back to the Mid-Continent Conference days, Valpo has now won a regular season title in 12 of the last 21 seasons.

Friday’s victory also was the 26th of the season for the Crusaders, matching the 2012-13 team for the program record for wins in a season. Valpo was also the only Horizon League team to defeat Cleveland State at the Wolstein Center this season.

The defensive struggle saw both sides battle for control in a first half devoid of much scoring. Trailing by two points 13 minutes into the half, junior Darien Walker (Chicago, Ill./Simeon [John A. Logan/Arizona Western]) hit a pair of 3-pointers in a three-possession span to give Valpo a two-point advantage. Carter’s 3-pointer with 3:44 to go in the half broke a tie and sparked a mini 6-0 spurt into the locker room, as Peters added two free throws and senior Vashil Fernandez (Kingston, Jamaica/Princeton Day [Md.] Academy) hit one to give Valpo a 23-17 lead into halftime.

Valpo would score just five points in the first six-plus minutes of the second half, those coming on back-to-back possessions on a Fernandez layup and a Peters 3-pointer in transition, but that would be enough to extend the lead. Cleveland State hit just a single 3-pointer during the same stretch, as going back to the first half, the Crusaders limited the Vikings to just three points over a span of 12:26.

A triple from junior E. Victor Nickerson (Atlanta, Ga./Norcross [Charlotte]) pushed the lead to double figures for the first time with 12:49 to play (32-22), and a couple minutes later, freshman Tevonn Walker (Montreal, Quebec/Vanier College) nailed triples on back-to-back possessions, the second coming with the shot clock winding down. When Darien Walker hit a runner in the lane off his own miss with 9:24 to go, the lead reached its apex at 40-26.

But Cleveland State had one more run in it, putting on the pressure and forcing turnovers on six straight Crusader trips. Over that stretch, CSU scored eight straight points to cut the lead to 40-34, and after the two teams split free throws, it was still a two-possession game with less than six minutes remaining.

Valpo started to pound the ball inside, though, to snap its scoreless drought. Back-to-back trips saw Peters hit layups inside off feeds from Darien Walker and Carter, and then Peters caught a lob and delivered it to Fernandez in the paint for a one-handed slam to push the lead to 47-37 with 3:41 to play. One minute later, the lead was still 10 until the Vikings’ Andre Yates and Marlin Mason hit back-to-back 3-pointers to cut the advantage to four. But that just set up Peters’ four-point play, as the Crusaders celebrated once again.

Peters led Valpo with 15 points despite taking just six field goal attempts, going 5-of-6 from the field and 2-of-2 from behind the arc. Darien Walker finished with 13 points, eight rebounds and four assists, while Tevonn Walker was a perfect 4-of-4 from the floor for 11 points. Fernandez closed the night with nine points and eight rebounds as well.

Trey Lewis led Cleveland State (17-13, 11-5 Horizon) with 13 points, but three of those came on a shot at the horn with the game in hand as he was just 5-of-17 overall from the floor. Mason scored 12 points and Yates added 11 in the losing effort, while Valpo limited All-League candidate Anton Grady to just five points on 1-of-6 shooting. Grady did lead all players with 13 rebounds.

Valpo will host the 2015 Horizon League Championship at the ARC beginning on Friday, March 6, as the third and fourth seeds will face the two teams remaining from Tuesday’s first round games. The Crusaders’ first tournament game will come in the semifinals Saturday night, March 7 at 8:30 p.m., live on ESPNU. Should Valpo win its semifinal, the title game would be held at the ARC at 6 p.m. on Tuesday, March 10 and broadcast live on ESPN.