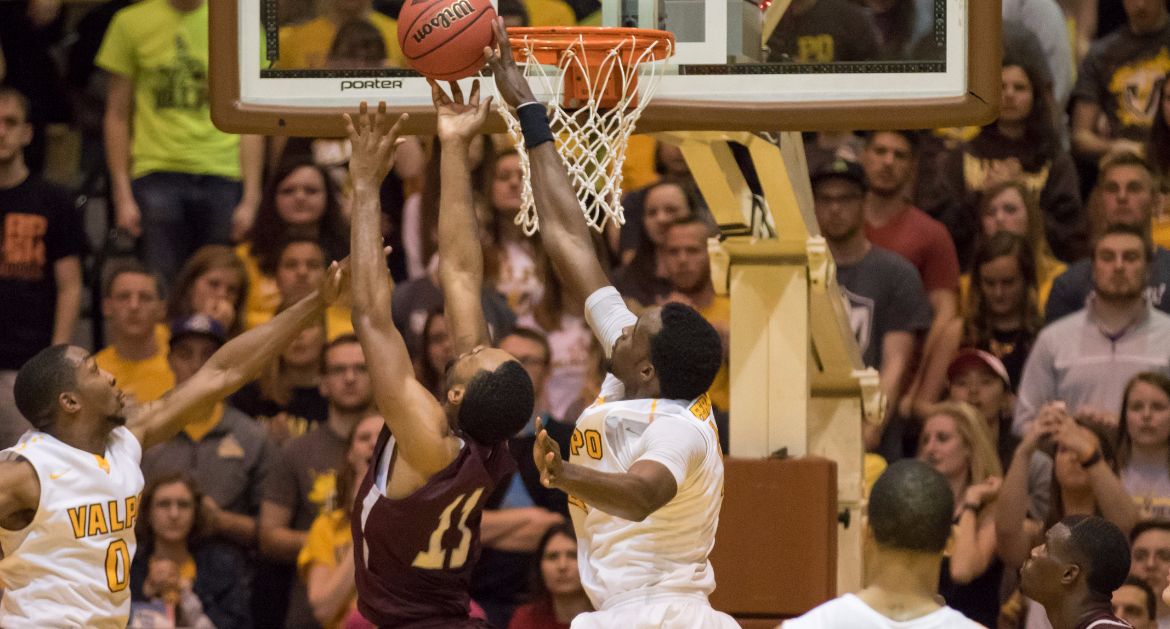 The Valparaiso University men’s basketball team earned its first postseason win since 2008 and the program’s first victory ever in the Postseason NIT on Tuesday evening, leading start to finish at the ARC in an 84-73 victory over Texas Southern. With the win, the Crusaders advance to host Florida State on Thursday night at 6 p.m. at the ARC. Tickets will go on sale Wednesday morning at 9 a.m. online, via phone at 1-877-MY-VU-TIX and at the Valpo box office, while tickets for Crusader season ticket holders will be held until 5 p.m.

Making their sixth straight postseason appearance, the Crusaders picked up their first victory in postseason play since downing Washington on the road in the opening round of the 2008 CBI. The win was also the program’s first in the NIT, coming in its third appearance as Valpo fell in the first round in 2003 and 2012.

The victory Tuesday night was highlighted by a record-setting performance by senior center Vashil Fernandez (Kingston, Jamaica/Princeton Day [Md.] Academy). Fernandez swatted five TSU shots in the first half and then rejected three more shots in the second half, matching his own Crusader single-game record with eight blocks on the night. With his third block of the evening, Fernandez also broke his own Valpo single-season mark from last year and now has 104 total blocks on the season. The senior nearly posted a triple-double on Tuesday as well, finishing with eight points, 10 rebounds and the aforementioned eight blocks.

Offensively, as it has been all season long, junior Alec Peters (Washington, Ill./Washington). Peters nearly matched his season scoring average in the first half, going 7-of-11 for 17 points in the opening 20 minutes, and added 11 second-half points to finish as Valpo’s leading scorer with 28 points. The junior ended the night with 1,606 career points, passing Ryan Broekhoff for sixth in Crusader history and leaving him just 15 points shy of Raitis Grafs in fifth position.

Valpo started the game strong, scoring on each of its first three possessions – including two baskets from Walker – and then getting back-to-back 3-pointers from Carter to force a TSU timeout just 3:19 into the game, with the lead already at 12-2. But the Tigers would prove hard to shake, as that would be the Crusaders’ largest lead of the opening period.

Three times late in the half, TSU cut the Valpo lead to one point, but each time the Crusaders responded – the final time with back-to-back 3-pointers from junior Jubril Adekoya (Tinley Park, Ill./Andrew) and Peters to push the advantage to seven points. Peters would knock down another triple on a second-chance opportunity inside the final minute of the half to help give Valpo a 41-35 lead into halftime.

Texas Southern would never make it a one-possession game in the second half, but kept the pressure on the Crusaders throughout, thanks in large part to the play of Chris Thomas – who scored 22 of his game-high 31 points in the second half. Multiple times, TSU cut the lead to four or five points, but each time Valpo had an answer.

With the lead sitting at 60-55 approaching the halfway mark of the second half, the Crusaders strung together six straight points on a Carter layup, two Peters free throws, and an alley-oop from junior Shane Hammink (Millingeen aan de Rijn, Netherlands/Oakley College [LSU]) to Walker to push the advantage to 66-55 with 9:56 to play. The Tigers crept back to within 68-61 with 5:53 to play on another basket from Thomas, but Carter scored twice in a 30-second span to keep TSU at bay, and the Tigers would get no closer than nine points the rest of the way.

The Crusaders finished the night shooting just under 50% from the field, going 30-of-61, and hit six of their nine 3-point attempts in the opening period. Valpo handed out 16 assists against just seven turnovers, with five helpers apiece coming from Carter and Hammink, while led by Fernandez’s eight rejections, the Crusaders finished with 10 blocked shots as a team.

Texas Southern (18-15), which earned a berth into the NIT by virtue of winning the SWAC regular season title, was led by Thomas’ 31 points, while Derrick Griffin posted 18 points and eight rebounds and Malcolm Riley added 12 points and 11 rebounds.

Valparaiso (27-6) welcomes Florida State, which defeated Davidson Tuesday night 84-74, to the ARC on Thursday evening. The visit from the Seminoles is the first by a current ACC member as a member of the conference to the ARC. TV information for Thursday’s game is pending, but as always, Crusader fans can listen live on WVUR (95.1 FM, Valparaiso) and online at ValpoAthletics.com, which will also have links for live video and stats.