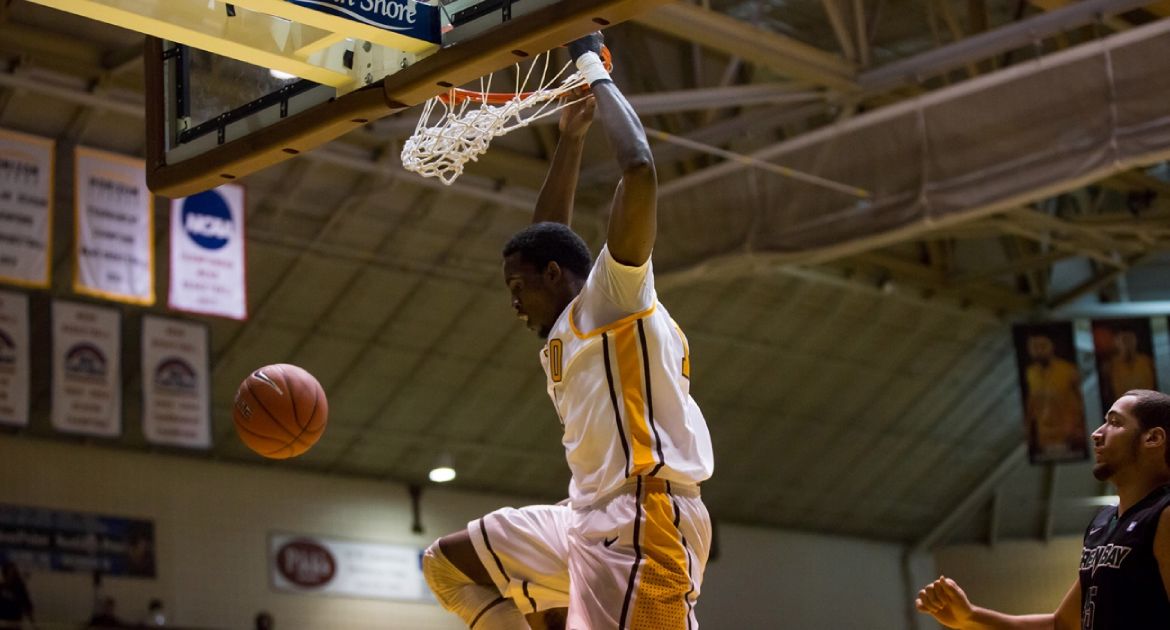 Sophomore Alec Peters (Washington, Ill./Washington) re-entered Saturday night’s against Wright State for Valparaiso with the Crusaders trailing by two points and 8:49 to play. By the time head coach Bryce Drew made his next substitution, there was less than a minute remaining and the Crusaders were up by double figures en route to a 66-56 win over the Raiders. The win moves Valpo to 17-3 overall for the first time in 70 years.

Nickerson was the catalyst early on for the group on the floor for Valpo, driving for a layup deep in the shot clock to tie the game at 40-all, and then after a WSU miss, again connecting late in the shot clock, this time from 3-point range to give the Crusaders a 43-40 lead. WSU’s Michael Karena hit a shot from close range to make it a one-point game, and while Peters would knock down a triple on Valpo’s next possession, the Raiders got a 3-pointer of their own from Joe Thomasson to make it just 46-45 Valpo.

After a turnover, WSU had two shots to claim the lead, but could connect on neither, and the Crusaders would score on their next five possessions to pull away. Walker started the stretch by single-handedly dribbling through the Raider press and going all the way to the basket for a layup, and then on Valpo’s next trip, Walker drove and finished in the half-court to push the Crusader lead to 50-45 with 4:45 to play.

Nickerson grabbed a rebound off his own miss on Valpo’s next possession and was fouled, splitting a pair of free throws to make it a six-point game. Fernandez then stepped up, forcing an errant shot on the defensive end and scoring at the rim while being fouled on offense, extending the lead to 53-45. Then, after a blocked shot by Peters on a 3-point attempt, Fernandez took advantage of a five-guard lineup for Wright State, as he posted up and easily made a post move for a hook shot in close, making it a double-figure advantage for the first time in the second half.

Wright State wouldn’t fold, hitting triples on two of its next three possessions to make it a five-point game as the clock ticked under two minutes. Again Fernandez would come up big, taking the inbound pass against WSU’s press and hitting both free throws after he was fouled. Then, after a Raider miss, Nickerson broke the Raider pressure and found Fernandez all alone in close, where he finished through contact to make it 60-51 with just 1:29 to play. The Crusaders would hit 6-of-8 free throws down the stretch as the Raiders never got any closer than eight points in the final 90 seconds.

Valpo got off to a strong start Saturday, scoring the first six points of the game to claim the lead quickly. Then, with WSU within 10-8 six minutes in, the Crusaders reeled off a 14-5 run over the next six minutes – including four points apiece from Fernandez and junior Darien Walker (Chicago, Ill./Simeon [John A. Logan/Arizona Western]) – to push their lead to 24-13 with 7:36 to play in the half. With the lead down to six points, Walker would connect on a 3-pointer with 4:35 remaining in the opening period to make it 29-20, but the Raiders scored the final seven points of the half to cut the Crusader lead to 29-27 at the break.

The Raiders took their first lead of the game with 17:56 to play on a fast-break layup by Kendall Griffin, taking advantage of the fact the Crusaders would score just one point in the first four minutes of the period. Save for a stretch of 18 seconds, the teams were within one possession for the opening 13 minutes of the half, as neither side would gain control until Valpo’s big run late.

For the second time in five league games, Fernandez paced the Crusaders in the scoring column, going 6-of-8 from the field in a 14-point effort. The senior also grabbed a game-high nine rebounds, leading the way as Valpo out-rebounded Wright State 46-25 – the 10th time this year the Crusaders have held a double-digit advantage in the category. 17 of Valpo’s boards came on the offensive glass as the Crusaders finished with 18 second-chance points.

Fernandez had plenty of help offensively, as four Valpo players scored in double figures. Darien Walker ended the night with 13 points on 6-of-11 shooting, leading the way offensively in the first half, as he scored 11 of his points in the first 20 minutes.

Tevonn Walker scored 11 points and grabbed five rebounds, and Peters – despite being held without a field goal until 28 minutes into the game – finished with 11 points and seven rebounds as well. The Crusaders, playing without starting point guard Keith Carter for the third straight game, shot just 22-of-54 (40.7%) for the game from the floor and were just 3-of-12 from behind the 3-point line, but grabbed nearly as many offensive rebounds as the Raiders picked up on the defensive glass.

Wright State (10-9, 2-3 Horizon), playing without leading scorer JT Yoho, was led by 10 points from Reggie Arceneaux. Chrishawn Hopkins and Michael Karena added nine points each, while Griffin finished with six points, five rebounds and six assists. The Crusaders limited the Raiders to just 37.7% shooting from the field, the fourth straight game and sixth out of the last seven that Valpo has held its opponent under 40% on field goals.

Valparaiso (17-3, 4-1 Horizon) looks for its fifth consecutive win on Tuesday evening as they continue a tough stretch of road games at Youngstown State. Tip-off is slated for 6 p.m. CT, and as always, all the action can be seen on the Horizon League Network via ESPN3.com and heard on the Valpo Sports Network. Links for the live audio and video, as well as live stats, will be available at ValpoAthletics.com.