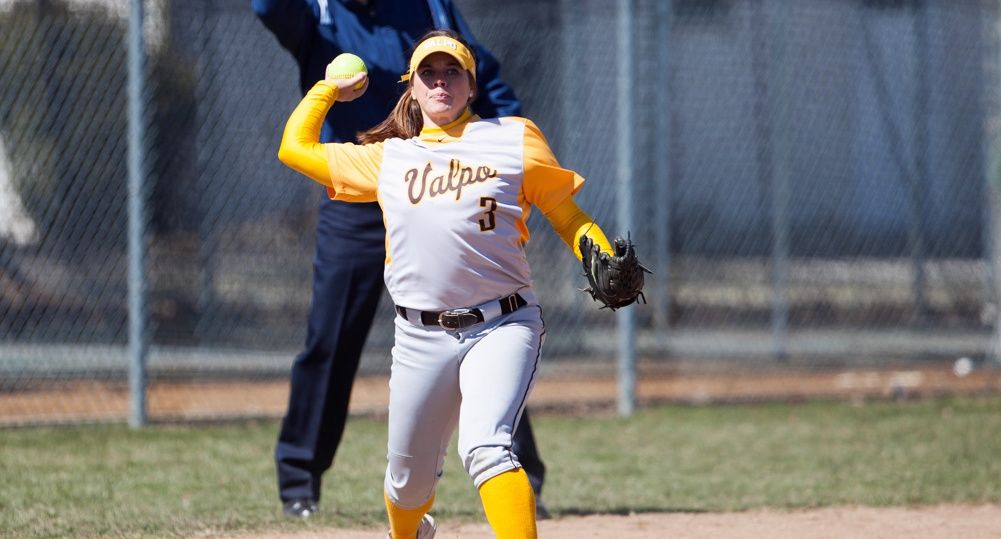 Runs weren’t hard to come by for the Valparaiso and Wright State softball teams in a doubleheader Saturday at the Valparaiso University Softball Field, as a pair of high-scoring games saw squads overcome large deficits. The Crusaders held a six-run lead in game one before WSU rallied for an 11-9 win, but in the nightcap, Valpo overcame a three-run deficit for a 9-7 victory.

Valpo finished with 18 runs and 24 hits combined on the day, with three Crusaders registering at least four hits apiece. Junior Sierra Pico (Las Vegas, Nev./Legacy) led the way, going 6-for-7 with two doubles and three runs scored – raising her season batting average 71 points in the process. Senior Tarah McShane (Streamwood, Ill./St. Edward) finished the day 5-for-7 with four RBIs, while freshman Stephanie Moreno (Murrieta, Calif./Murrieta Valley) scored four runs and connected on a pair of doubles as a part of her 4-for-7 effort.

“We are coming up short in a couple areas, but resilience isn’t one of them,” said Crusader head coach Kate Stake. “Losing the first game after being up the whole time and scoring nine runs is tough to swallow, and then Wright State jumped all over us in the top of the first in game two. But I was happy we answered right back and kept fighting our way through that game with our bats.”

It looked like the Crusaders were well on their way to a win in the opener on Saturday, with big plays early both at the plate and in the field. Wright State loaded the bases with one out in the first and put two on with one away in the second, but both times, Valpo turned double plays to keep the Raiders off the board. Offensively, sophomore Jorgi Calombaris (Frankfort, Ill./Lincoln-Way East) delivered a two-run triple in the first and came home on a single from freshman Taylor Nadler (New Haven, Mo./St. Francis Borgia). Moreno and McShane each connected on run-scoring hits in the second inning as well as the Crusaders led 5-0 through two frames.

After putting eight runners on base without scoring through the first three innings, Wright State finally broke through in the fourth, as Macey Gunther delivered a three-run homer to cut Valpo’s lead to 5-3. The Crusaders barely flinched, however, as a two-out error by the Raiders kept the bottom of the fourth going and Valpo took full advantage. McShane lined an 0-2 pitch the opposite way to plate Pico, and junior Kaitlyn Ranieri (Schererville, Ind./Lake Central) followed by drilling a three-run homer to right, pushing the advantage to 9-3.

But that would be all for Valpo’s offense in the opener, as the Crusaders were unable to get any runners even to third base over the final three innings. A pair of solo homers for the Raiders brought them within 9-5 after five innings, and Kortney Tackett then connected on a two-out grand slam in the sixth to tie the ballgame. Later in that inning, Gunther connected on a run-scoring single to put WSU ahead for good, and the Raiders added an insurance run in the seventh as well.

Pico went 4-for-4 to lead Valpo in the opener, while Moreno, McShane and Ranieri all had two hits as well. Hanna Floyd went 4-for-5 at the plate for Wright State and was joined in three-hit efforts by Gunther and Becka Peterson [3-for-3, 2 BB, 3 R]. Montana Wear earned the complete-game win for the Raiders, while junior Mollie Lindeman (Hebron, Ind./Hebron [PNC]) took the loss for Valpo, falling to 3-7 as she surrendered five runs in 1.1 innings of relief work.

“We need to limit the runs we give up,” said Stake. “We shouldn’t be losing games where we score nine runs, period, so I’m glad we stepped up in game two, scored that same amount but came out on top.”

The nightcap was all Wright State early on, as after rallying for the win in the opener, the Raiders scored three runs in the top of the first. But the resilient Crusaders responded immediately, as Nadler drove in a run with a groundout and Calombaris followed with a two-run double to make it 3-3 after one inning. Valpo added three more runs in the second as well, as Pico – who recorded a one-out double – came home on a line-drive single from sophomore Taylor Lawson (Tucson, Ariz./Sahuaro). Lawson later scored on a McShane single, while Ranieri plated Moreno on a base hit to push the lead to 6-3.

The Crusaders would leave the bases loaded in the second, however, and it looked like it might prove costly, as Wright State pushed across two more runs in the top of the third to make it a 6-5 ballgame. But again, Valpo would answer, as senior Lindsey Norway (Chicago, Ill./Chicago Christian) led off the bottom half of the inning with her second homer of the year, and later in the frame, McShane brought Lawson around with a two-out run-scoring double. Moreno added a final insurance run on an RBI double in the bottom of the fifth, and while Peterson scored two runs on a bases-loaded single in the sixth, the Raiders would get no closer than two runs the rest of the way.

McShane led the offensive effort in the nightcap with three hits, while Lawson, Moreno and Pico all had multi-hit games as well. Peterson was one of four Raiders to tally two hits, driving in four runs in the second game and finishing the day reaching base in all nine of her plate appearances. Wear took the loss for Wright State (7-21, 3-2 Horizon), as she entered in relief in the second inning and gave up six runs in five innings of work to fall to 6-12. Freshman Ashlyn Montgomery (Columbus, Ind./Columbus) toiled through a complete-game effort to earn the win for Valpo, improving to 5-2 on the season.

“I thought Sierra had a great day at third today,” said Stake on the defensive effort. “She came up with some key outs and a couple momentum-killing double plays. Our outfield made a couple very good plays today as well. They’ve been quietly and consistently getting the job done for us all year, but today they got to stand out a bit more – they pulled down some not-so-routine balls.”

Valparaiso (8-17, 2-3 Horizon) is scheduled to close out the three-game series against Wright State on Sunday afternoon at 1 p.m., weather permitting. Live stats and audio will be available at ValpoAthletics.com.