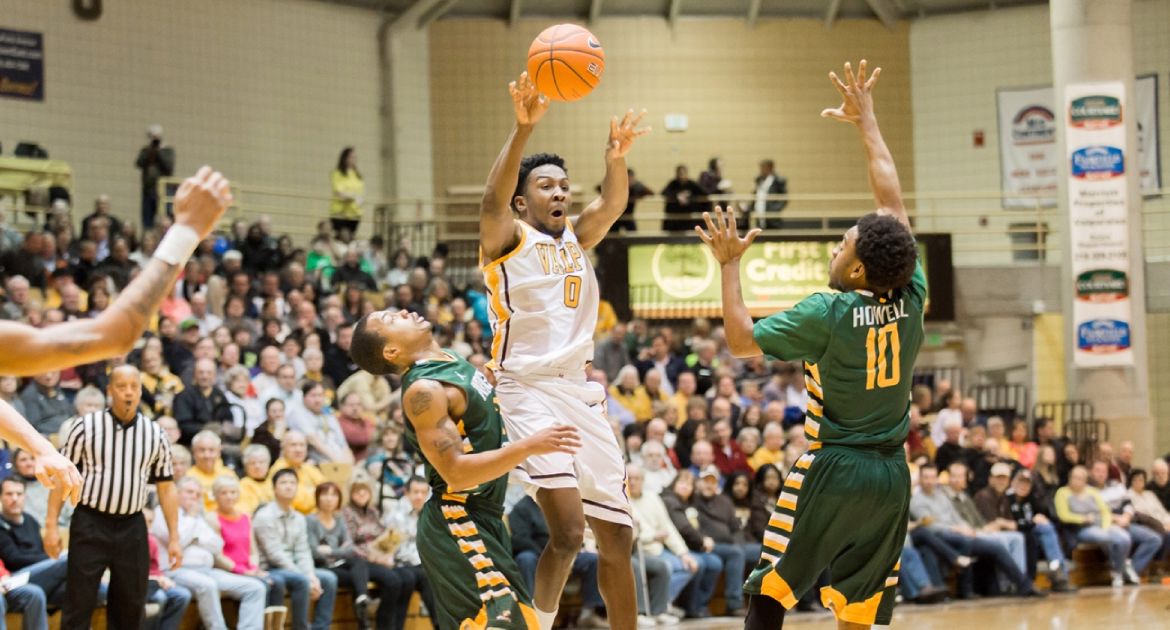 Next Up in Crusader Basketball: With one goal down, the Valparaiso men’s basketball team takes flight towards its second goal winning the Horizon League Championship and earning the league’s automatic bid to the NCAA Tournament on Saturday evening, when the Crusaders will face either Cleveland State or Detroit in the league tournament semifinals.

Last Time Out: Three outright Horizon League regular season championships in four years. The Valparaiso men’s basketball team made sure they would share the title banner with no other team last Friday night, winning at Cleveland State 56-53 in front of a national television audience to finish atop the league with a 13-3 record. Alec Peters scored a game-high 15 points, including a key four-point play with 1:14 to play. The victory also matched the program record for wins in a season, as Valpo improved to 26-5.

Head Coach Bryce Drew: Bryce Drew (92-41) is in his fourth season at the helm of the Crusader men's basketball program in 2014-15. In his first three years, Drew led Valpo to 66 victories and postseason berths in each of his three seasons. The 2012 HL Coach of the Year, Drew ascended to the head coaching position on May 17, 2011 after spending six seasons as an assistant and associate head coach with the Crusaders.

Series Notes: Cleveland State holds a 30-15 advantage in the all-time series over Valpo, including a 9-8 edge over the Crusaders since they joined the Horizon League. Valpo won both meetings this season, however a 58-56 win at home and a 56-53 win on the road. The Crusaders lead the all-time series with Detroit 14-11, including a 12-7 mark since joining the league. The two squads split this season, though, both winning on their respective home floor Valpo won 78-70 at the ARC, and Detroit won 63-60 in Calihan Hall.

...notes from Cleveland State
Valpo led the entire second half, as the Vikings never got closer than the three-point final margin.
The Crusaders led by as many as 14 in the second half.
After missing its first three 3-point attempts, Valpo hit eight of its final 13 shots from deep.
The Crusaders won despite getting out-rebounded just the third time this season they have lost the battle on the glass.
Alec Peters’ key four-point play with 1:14 to go capped a 15-point night for the sophomore.
Tevonn Walker went 4-of-4 from the floor for 11 points, while Darien Walker added 13 points, eight rebounds and four assists.

...looking ahead
The 2015 Horizon League Championship title game would be held on Tuesday at the ARC with a Crusader win Saturday.

All-League Honorees
Five Crusaders were honored with #HLMBB postseason awards.
Head coach Bryce Drew earned Coach of the Year honors for the second time (2011-12).
Senior Vashil Fernandez was named Defensive Player of the YearValpo’s first since joining the league and was also a member of the league’s All-Defensive Team.
Sophomore Jubril Adekoya earned Sixth Man of the Year honors, the third Crusader to earn the award in the last eight years.
Sophomore Alec Peters was a First Team All-League honoree, while Tevonn Walker earned a spot on the All-Freshman Team.

Heading to the Postseason Again
The regular season title also secures at worst a berth in the postseason NIT for the Crusaders.
This marks the fifth straight season Valpo will appear in postseason play and the 14th time in the last 20 years.
Every four-year senior class since the 1995 class has made at least one postseason trip.

Hitting 26 Wins
@ValpoBasketball reached 26 wins on the year with the win at Cleveland State on Friday.
The Crusaders are one of 11 teams in the nation with at least 26 wins as of the end of play Wednesday.
The Crusaders earned their 20th win at UIC on Jan. 31 they had previously never reached their 20th win before Feb. 12 (2012-13).
Valpo has now won at least 20 games 14 times in the last 22 years, including three times in four seasons under Bryce Drew.

Young Guns
Valpo won the outright #HLMBB title despite being an underclassman-laden squad.
The Crusaders have just one senior in their regular rotation and have five underclassmen among their nine players averaging 10+ minutes.
Valpo ranks 265th nationally in Ken Pomeroy’s Experience metric, with only Kentucky and Duke ranking lower among teams with 26+ wins.
The Crusaders are the least-experienced team in the Horizon League, with Detroit (207th) the next least-experienced squad.

Poll Thoughts
For the fifth straight week, @ValpoBasketball is receiving votes in both national top-25 polls (Associated Press/Coaches).
The Crusaders peaked at 10 points in the AP poll and 16 points in the coaches poll.
Valpo sits at seventh in the Mid-Major Top-25 Poll and has been within the top-10 almost the entire year, reaching as high as fourth.

Hitting the Glass
Valpo has out-rebounded opponents by double figures 13 times on the year, including a +12 edge in the win over Wright State.
The Crusaders outrebounded Wright State by 21 earlier this year best vs. a D-I opponent since a +22 advantage on the glass last year vs. Saint Louis.
Valpo has only been outrebounded on three occasions this year losses to New Mexico and Missouri, and the season-ending win at CSU.
The Crusaders’ league-leading rebounding margin sits at +7.7, good for 12th in the nation.
Valpo leads the league in rebounding margin by five boards/game, and also paces the circuit in both offensive and defensive rebounding pct.

Defensive Prowess
The Crusaders held 13 of 16 opponents to 65 or fewer points in #HLMBB play.
Earlier this year, Valpo held three straight foes to 56 points, the first time it won 3 straight games and gave up 56 or fewer points in all three since Dec. 7-17, 1983.
Valpo ranks 28th nationally in scoring defense and 12th in field goal percentage defense.
Valpo boasts a defensive efficiency of 94.6, 43rd-best nationally the Crusaders haven’t ranked in the top-100 since 2006-07.
Crusader opponents are shooting just 42.3% from 2-point range (15th nationally) and are pulling down just 27.3% of available offensive boards (34th nationally).

Bryce Drew
Bryce Drew is in his fourth season as head coach of @ValpoBasketball and is in his tenth season overall on the coaching staff.
Last season, Drew led the Crusaders to 18 wins and their fourth straight postseason berth.
In 2012-13, Drew guided Valpo to its second straight regular season title, its first tournament title and a school record 26 wins.
Drew was named #HLMBB Coach of the Year in 2011-12 in his first season as head coach 22 wins and #HLMBB regular season title.
Drew was the first Crusader men’s basketball Coach of the Year since 2001-02, when dad Homer won the honor in the Mid-Con.
Prior to coaching, Drew spent seven seasons playing professionally, including six seasons in the NBA.
Drew was a two-time Mid-Con MVP in his playing days with Valparaiso, helping the team to three NCAA tournament appearances.
Drew hit “The Shot”, a buzzer-beating 3-pointer in the first round of the 1998 NCAA tournament, to lift the Crusaders over Ole Miss.
“The Shot” was named one of the top-35 All-Time Madness Moments by the NCAA as part of the celebration of 75 Years of March Madness.