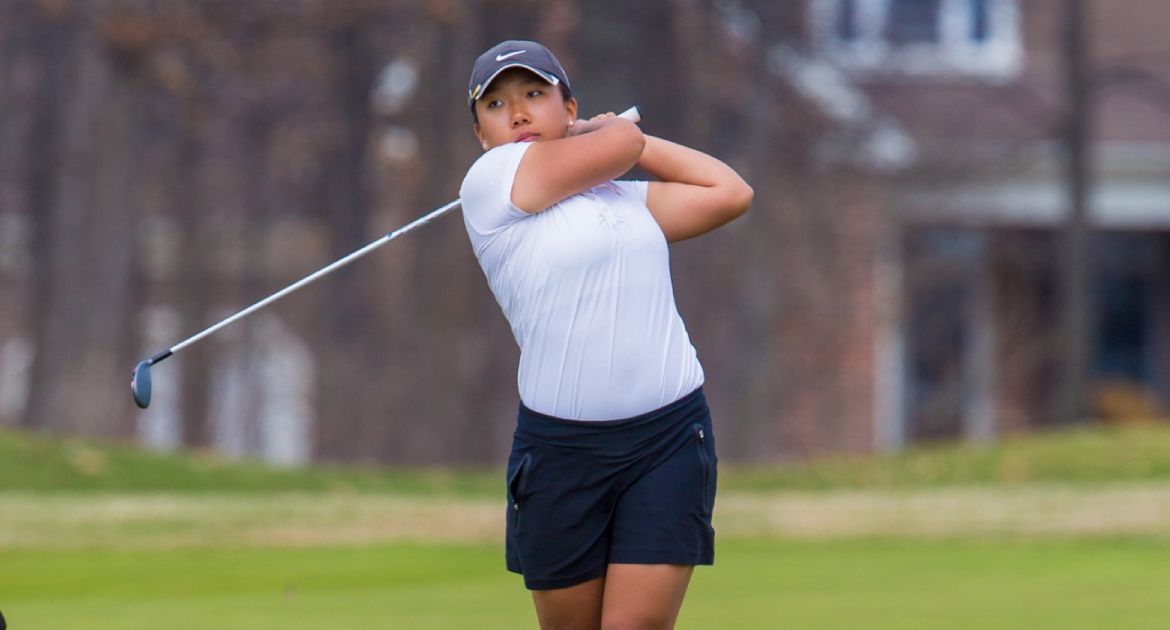 Hosting its first event at The Course at Aberdeen since April of 2014, the Valparaiso University women’s golf team earned a tie for first place in the 36-hole Chi-Town Classic on Sunday, finishing tied atop the leaderboard with UIC. Crusader junior Angie Kim (Schaumburg, Ill./Fremd) claimed the individual title by three shots.

Valpo opened the 36-hole event, a three-team tournament which also included UIC and Loyola, with an opening-round score of 308, tied for the fifth-lowest round in relation to par (+20) and the sixth-lowest by overall score in program history. The opening round gave Valpo a 14-stroke lead over Loyola and a 17-stroke edge over UIC.

But both teams would better the Crusaders over the final 18 holes, and UIC’s 310 in the final round, along with Valpo’s 327, was enough to leave the two teams tied atop the standings at 635. Loyola finished one stroke back at 636. The Crusaders’ 635 total is tied for fourth-best overall and tied for third-best in relation to par in program history for a 36-hole tournament.

Kim led the way for the Crusaders in both rounds en route to winning the tournament by three strokes. The junior opened with a 71 over the par-72, 6,012-yard course, just the fourth round under par in program history. Kim followed with a 74 in the afternoon round for a 36-hole score of 145 (+1), the third-lowest score in relation to par and fourth-lowest overall for a 36-hole tournament all-time at Valpo.

Fellow junior Sydney Shrum (Cloverdale, Ind./Cloverdale) was the second-best Crusader finisher, posting rounds of 78 and 85 for a 36-hole score of 163, good for a tie for eighth place. Senior Sibil Gill (Kokomo, Ind./Western) shot a 165 (81-84) to finish in 14th place, one stroke ahead of freshman Kylie Shoemake, who registered rounds of 82 and 84 for a 166.

Freshman Madison McCreary rounded out the Crusaders’ team quintet with a tie for 17th place at 169 (78-91). A trio of Crusaders competed as individuals as well: sophomore Katie Willenbrink (Mishawaka, Ind./Penn) shot a 167 (79-88) to finish in 16th position, sophomore Kiana Jongsma (Dyer, Ind./Lake Central) was tied for 17th at 169 (83-86) and senior Annie Gaugert (Lake Geneva, Wis./Badger) shot a second-round 85.