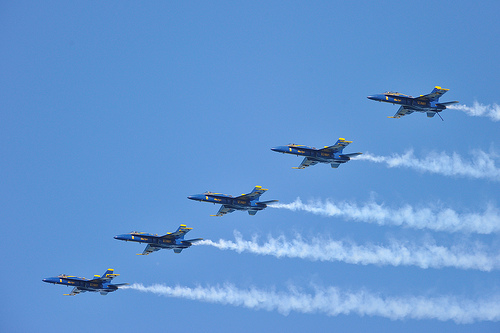 The 52nd Annual Chicago Air and Water Show presented by Shell Oil Products U.S and the City of Chicago rocks the lakefront August 14-15, 2010 for the largest FREE show of its kind in the United States. The U.S. Navy Blue Angels, U.S. Army Parachute Team Golden Knights and the U.S. Navy Leap Frogs will headline the Chicago Air and Water Show along the lakefront from Fullerton to Oak Street, with North Avenue Beach as the focal point. New time this year; the water and air portions have been combined for one continuous show beginning at 11 a.m. and ending at 4 p.m. both days.

America’s military elite are on display this year. The U.S. Navy Blue Angels have been astounding audiences since 1946 with their gravity defying flying, commanding presence and supersonic maneuvers in their F/A-18 Hornets. The brave men and women of the U.S. Army Parachute Team Golden Knights and the U.S. Navy Leap Frogs will inspire spectators as they jump out of an aircraft 12,500 feet above the earth’s surface, racing to North Avenue Beach at speeds exceeding 120 mph, making a perfect landing.

Strong in tradition and one of the world’s premier aviation events, the show includes a wide array of military and civilian acts thrilling spectators along the lake front each summer. Daredevil pilots performing their aerial stunts include Sean D. Tucker and Team Oracle in the Oracle Challenger, Aeroshell Aerobatic Team in their WWII North American Advanced Trainer, Lima Lima Flight Team in the BeechT-34 Mentor, The Firebirds in their Walter Extra 300 S, Bill Stein Airshows in his Zivko Edge 540 and Chuck Aaron in the Red Bull Helicopter.

For the last 15 years the Chicago Air and Water Show has been presented by Shell Oil Products U.S. and the City of Chicago. “Shell Oil Products US is proud to be the presenting sponsor of the Chicago Air and Water Show since 1995”, said Kevin Autin, General Manager, SOPUS. “This event allows Shell the opportunity to connect with the City of Chicago and embrace the local community. We are honored to take part in bringing this free event to the Chicago shoreline to showcase the pride in our brand and our appreciation for the City."

Play-by-play coverage of the show will air on WBBM-AM Newsradio 780 on Saturday and Sunday from 11 a.m. until 4 p.m. Also, a thirty-minute highlight show "Chicago's Top Guns" will air on ABC 7 Chicago (WLS-TV) on Sunday, August 15 at 10:35 p.m. with Jerry Taft and Tracy Butler recaping the weekend's events. Back again for his 23rd year as “the voice”of the Air and Water Show, Herb Hunter utilizes his many years of experience as a military pilot and as a captain for one of the major airlines.

The Mayor’s Office of Special Events encourages taking public transportation to all lakefront festivals and events. Please call (312) 836-7000/TTY (312) 836-4949 for information on RTA, CTA, PACE, and Metra. For help planning your trip to Chicago, visit www.explorechicago.org.